Review: The Theory Of Everything Is, In Fact, Everything

Wind back the clock. 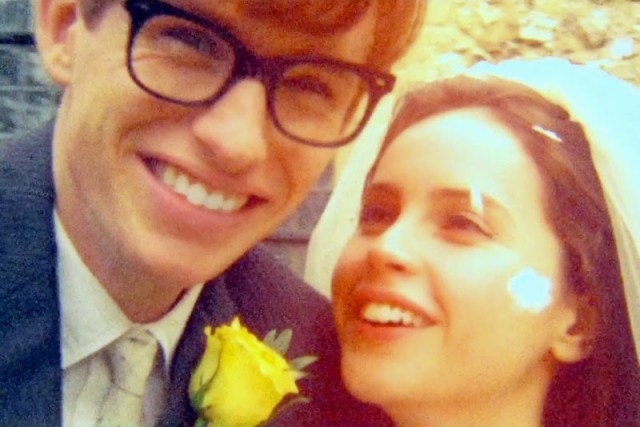 I suspect I speak for a large percentage of moviegoers when I say The Theory of Everything seemed like a “difficult” movie. Biopics rarely celebrate living subjects or tackle topics as specialized as theoretical physics, and there’s a certain trepidation that accompanies sitting down for a film where the main character will inevitably undergo the kind of physical suffering most of us are privileged to never experience. But director James Marsh delivers on the film’s titular promise in totally original ways. The Theory of Everything isn’t a film you watch out of obligation. It’s a movie you’ll want to watch, maybe even more than once.

My experience of Everything was improved, I think, by knowing nothing about Stephen Hawking’s relationship with his wife Jane, or Jane’s autobiography, Traveling To Infinity: My Life With Stephen. Without giving too much away for anyone else in that position, the movie focuses on the relationship between Stephen and his college girlfriend and eventual wife Jane Hawking, who convinces Stephen to pursue their relationship even after his insistence that she leave him following his diagnosis of ALS at age 21. The pair are followed from their days as a young couple working in obscurity to middle-aged parents and academic celebrities, and, again, I know that this all sounds rote and dry despite its fascinating subject. But it’s not. The Theory of Everything is like no biopic I’ve ever seen before.

Director James Marsh and screenwriter Anthony McCarten never romanticize Jane’s role as a caregiver for her husband, but pay respect to the grandiose triumphs (and typical disappointments) of their marriage using the literally awesome subject matter of Hawking’s theories as an analogy. His study of time serves as the movie’s pulse, conflating moments in their relationship: maybe Stephen and Jane have been married forever. Maybe they are meeting right now, for the first time, Stephen’s diagnosis a blip on a horizon that might never arrive.

While the film’s heady theoretical theories are represented effectively in visual layman’s terms–the swirling of cream in coffee, dancers holding hands–it’s clear that Marsh also understood the responsibility of accurately portraying life with ALS. That sense of immense respect and responsibility towards the film’s subject matter is also evident in Eddie Redmayne’s performance as Stephen, and Felicity Jones’ as Jane. The two have an incredible chemistry together that seems to come from their love for the people they’re portraying; not just Stephen and his various triumphs, but Jane as a fallible, ferocious, brilliant woman in her own right.