The Swapper: A Must-Play For Those Who Like Sci-Fi, Puzzles, and Other Quality Things

It began with me getting shot into space, stuck inside a literal tin can. I crashed down on a nearby planet. I was alone. I made my way across the still surface, rocks crunching beneath my feet, breath echoing within my spacesuit. I found a strange device on the ground. I pushed a button. In a flash, a copy of myself was created. A clone. Her motions mirrored mine. When I ran, she ran. When I jumped, she jumped. I made more copies. There were five of us. Five of me. I pushed another button, and my consciousness transferred into one of the clones. My former body followed obediently in my new footsteps.

I ran into a cave, filled with forgotten excavating equipment. I reabsorbed the clones into my current body. I stepped through a teleporter. And then, things got weird.

The Swapper came to me without much fanfare. I picked it up on the recommendation of a friend, who knew that the phrase “puzzle platformer set in the furthest reaches of space” was all I needed to hear. It sat in my Steam library for a week or two, waiting patiently. I was in the mood for puzzles one evening, and casually decided to give it a shot. I walked away some time after midnight, my head buzzing, my heart in my throat.

I know it’s only June. But unless something truly spectacular happens between now and December, I’m ready to call this my favorite game of the year.

The game takes place within Research Station Theseus, where, as you may have guessed, something has gone terribly wrong. I wandered the silent corridors, accessing logs recorded by crew members nowhere to be seen. Someone else was on the station with me, a nameless woman. Her voice crackled over the loudspeakers, following me. She was afraid. Then calm. Then angry. Her moods shifted unpredictably, as did her suggestions on how best to get out of there. She ran from me, raged at me, coaxed me to help. This was the company I kept — an insane survivor and my squad of synchronized clones. Oh, and the rocks, which aren’t rocks at all, and should never have been brought aboard.

The station is a maze of devilish puzzles, each of which leads to an orb, which in turn allows you to unlock doors and access controls. The mechanics are slightly reminiscent of what you’ll find in Trine or The Cave, in that they require the correct placement of multiple characters. The catch is that since all of the clones move in tandem, a safe step for one might send another careening off a ledge, or falling into oblivion. This happens often, and is even necessary for solving some puzzles. I never got used to the way my clones hit the ground with a sickening crunch, their broken spacesuits hissing for a few horrible seconds before they finally lay still. The first time this happened, I froze. I had been in that body a short time before. That had been my body, before I abandoned it. Who was in it now? Were the clones conscious? What was I swapping around, anyway? My neural patterns, or my soul?

I was wrestling with that question from the gameplay alone, well before I discovered the logs of scientists debating the same thing. The question of mind-vs-soul is the heart of the game, the pin that holds it all together. It gnawed at me, even as I accepted the disposable nature of my clones, even as I jumped through dozens (hundreds?) of bodies, all of which I let die. The woman on the speakers asks this question, too, chastising me for not understanding the device in my hands, even though it was clear that she herself did not, even though we both needed it to get out of there.

The Swapper displays a masterful command of atmosphere, knowing exactly when to whack you upside the head, and when to let you explore in peace. Presented differently, this game could’ve been uncomfortably disturbing, but perhaps its best trick is the way it delves into eerie territory while still imbuing the player with a sense of calm. Research Station Theseus is creepy, even macabre at times, but never in a way that repelled me. Nothing jumps out at you. There are no enemies to fight. Nothing but your own mistakes will kill you. There are no time limits. The excellent ambient soundtrack invites you to relax. The voice over the speakers falls quiet while you solve your puzzles, giving you the space to work things out.

The cumulative effect is a feeling of tranquil focus, which is crucial for the player’s success. This game requires some serious thinking. More than once, I found myself slumped against my desk, muttering pensively, my hand tangled in my hair. Difficult, yes, but so rewarding that even after banging my brain against the game for hours, the elation of success always sent me running eagerly toward just one more. I was reminded, in some ways, of Portal — a place filled with mysterious rooms you could think through at your own pace (not to mention a silent female protagonist, hounded by a deranged woman over loudspeakers). And I thought, too, of the movie Sunshine, which similarly framed lonely, creeping madness with the awe of outer space. Yes, I just compared this game to two of my very favorite pieces of media. Yes, it is that good. And yet, it seems a disservice to compare The Swapper to anything. I can point to individual elements that felt familiar, but the experience as a whole is wonderfully, stunningly unique. This is a game that stands apart.

Oh, and did I mention that the artwork is made not out of pixels, but clay? 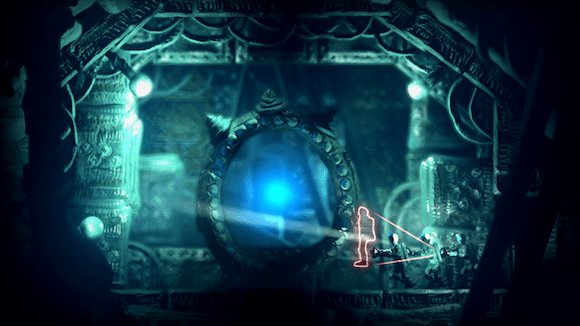 This is one of those special games that clings to you long after the credits fade. I lay awake in the hours after I completed it, still high from puzzles, still heavy under the implications of what I’d just done. I was relieved that my journey was over, but mourning that there was no more. This isn’t just a game set in space, but a true science fiction story, one told with a seamless flow that few games can boast. It respects the intelligence of the player, trusting that you have the capacity to piece the story together even while performing mental gymnastics. It asks serious questions about consciousness and death and the concept of self, knowing just when to rein itself in before it gets too big for its britches. And it’s a debut title, no less, created by the well-named Facepalm Studios, a four-person team that undoubtedly has a great future ahead of them.

The Swapper is available for Windows, with Mac and Linux versions on the way. It can be purchased straight from the developer, or through Steam.

Becky Chambers is a freelance writer and a full-time geek. Like most internet people, she has a website. She can also always be found on Twitter.