The Santa Claw | The Mary Sue 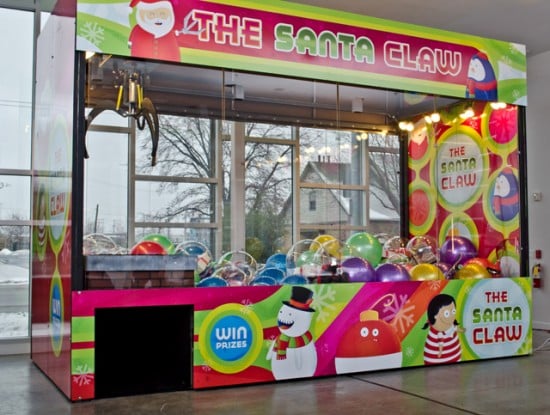 I spent a good portion of my freshman year in college playing the claw machines at the local Walmart Neighborhood Market.  At least, a portion larger than any college boy should’ve been trying to win dolls from a grocery store. My friend and I actually became good enough at claw machines to the point where one try would result in a prize about ninety percent of the time. So, imagine the joy I felt when I discovered The Santa Claw, a claw machine that people can play over the Internet, and have prizes mailed to them if they should win any.

Created by Real Art Design Group, The Santa Claw is made out of 2,000 pounds of steel, 700 feet of wires, and one-and-a-half wheelchairs. As the story goes, Santa had left over Christmas presents, so they were thrown into the claw machine and are now up for grabs.

The site requires you to sign in with either your Facebook or Twitter accounts, or you can create a regular account with your email address. Once logged in, users must wait in line to operate the claw over the Internet, but the page has avatars which users can customize and can see waiting in line on the webpage. Since watching a virtual guy wait in line sounds even less fun than waiting in line yourself, the page also features a camera view from inside the machine, so you can watch how the people playing the game are fairing against the gods of claw chance.

Terribly enough, the line has a maximum limit, so one must wait in line to wait in line. I actually haven’t even managed to get into the line yet, and judging from the view inside the machine, it doesn’t look like I’m going to make it into the line while there are any prizes left, unless, of course, the machine becomes refilled. There also doesn’t seem to be an indicator letting us know when a spot in the line opens up, but to be fair, the page is being a little wiggy for me, and the login information box doesn’t seem to want to go away, so the indicator could very well be hidden behind that.

What is obviously going on here, is Red Art Design Group has heard mysterious tales of a grizzled wanderer who travels the land in search of claw machine sustenance, pillaging and plundering any and all claw machines, leaving a land of empty claw machine ruin in his wake. They’ve heard tales, oh yes, and they keep the line full, for they know I’m watching, and they are not prepared for Claw Machine Apocalypse just yet.

(The Santa Claw via Laughing Squid)