The Psychology of Inspirational Women: Buffy the Vampire Slayer 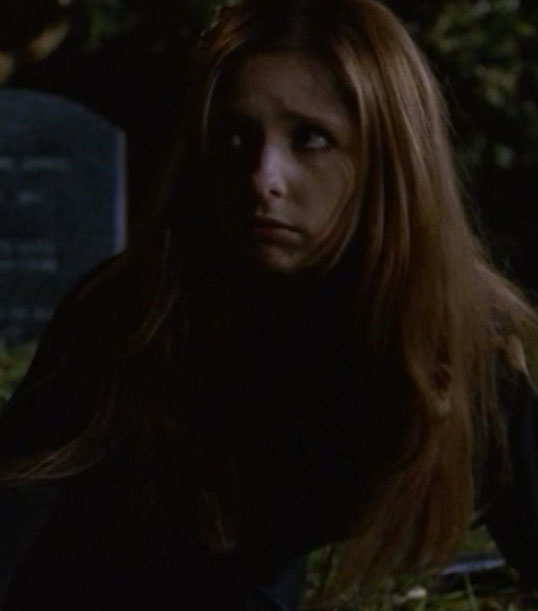 Welcome to our Psychology of Inspirational Women series, in which Licensed Clinical Psychologist Dr. Janina Scarlet talks us through the mindset of our favorite female characters. Spoilers for Buffy follow.

Going against the Hollywood stereotype of a powerless blonde girl getting ruthlessly murdered, the writer/director/producer of Buffy the Vampire Slayer wanted to create a hero, someone with the special powers to kick butt and protect others. 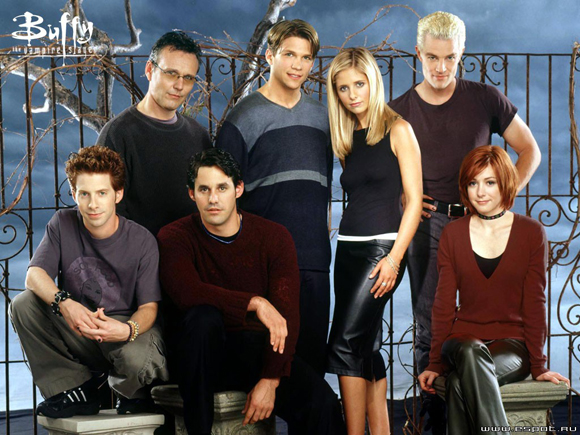 Buffy Summers is a teenaged student in the fictional Southern California town of Sunnydale, which also serves as a gateway to Hell, or Hellmouth, where most of the vampires and demons reside. It’s Buffy’s job to destroy those demons and to protect innocent people. Armed with a stake, holy water, and her team (commonly referred to as The Scooby Gang, or Scoobies), Buffy spends most nights patrolling the Sunnydale cemetery, risking her life to protect others.

From age fifteen, when she first gets her powers, Buffy sacrifices her own safety, physical and emotional wellbeing, and her social life to protect others. When she isn’t pretending to be a “normal” high school student at Sunnydale High, Buffy spends countless hours training with her Watcher, Giles, or slaying the demons and vampires that dare enter her city.

Buffy’s efforts don’t go unnoticed and soon enough, The Master (an ancient “King of the Vampires”) sets plans in motion for her demise. After several unsuccessful attempts, The Master decides to face the Slayer himself. Buffy learns of a prophecy, which states that she will not survive her confrontation with The Master. This is the first time that Buffy fully quits her lifelong career of being a Vampire Slayer, tearfully telling Giles that she’s only sixteen and doesn’t want to die.

However, when her friends’ lives are at stake, Buffy returns, rescuing them and sacrificing herself. Temporarily dying after being bitten by The Master and drowning in a pool, Buffy is rescued by her friend, Xander, who administers CPR just in time to save her. (This goes to show that we never know when we might need to use CPR, so whether you’re in the medical field, planning to fight vampires, or for any other reason, learning CPR might be as valuable as carrying a stake and a bottle of holy water). Buffy is finally able to defeat The Master, impaling him on a wooden stake and then smashing his remaining skeleton.

As traumatic as just barely escaping death may have been for Buffy, her troubles were merely beginning. Not long after Buffy and Angel, a “good” vampire with a soul, begin their relationship, Angel loses his soul and assumes his previous identity, Angelus, a vicious and cruel vampire. Angelus ends up wreaking havoc, killing Giles’ love interest, Jenny Calendar, and triggering an Apocalypse. Even though Willow, Buffy’s best friend, uses her newly-acquired magic abilities to reinstate Angel’s soul, she is too late. In order to stop Angelus and save everyone from the impending end of the world, Buffy ends up having to stab Angel with a magical sword in order to prevent the Apocalypse, after she tearfully tells him that she loves him and then asks him to close his eyes.

After having to banish the love of her life, Buffy is devastated. She temporarily leaves Sunnydale, going to L.A. for a while. Even though Angel is able to return, his transformation leaves him traumatized and he even considers committing suicide. When Buffy returns to Sunnydale, the two agree that it’s best if they do not continue their relationship. 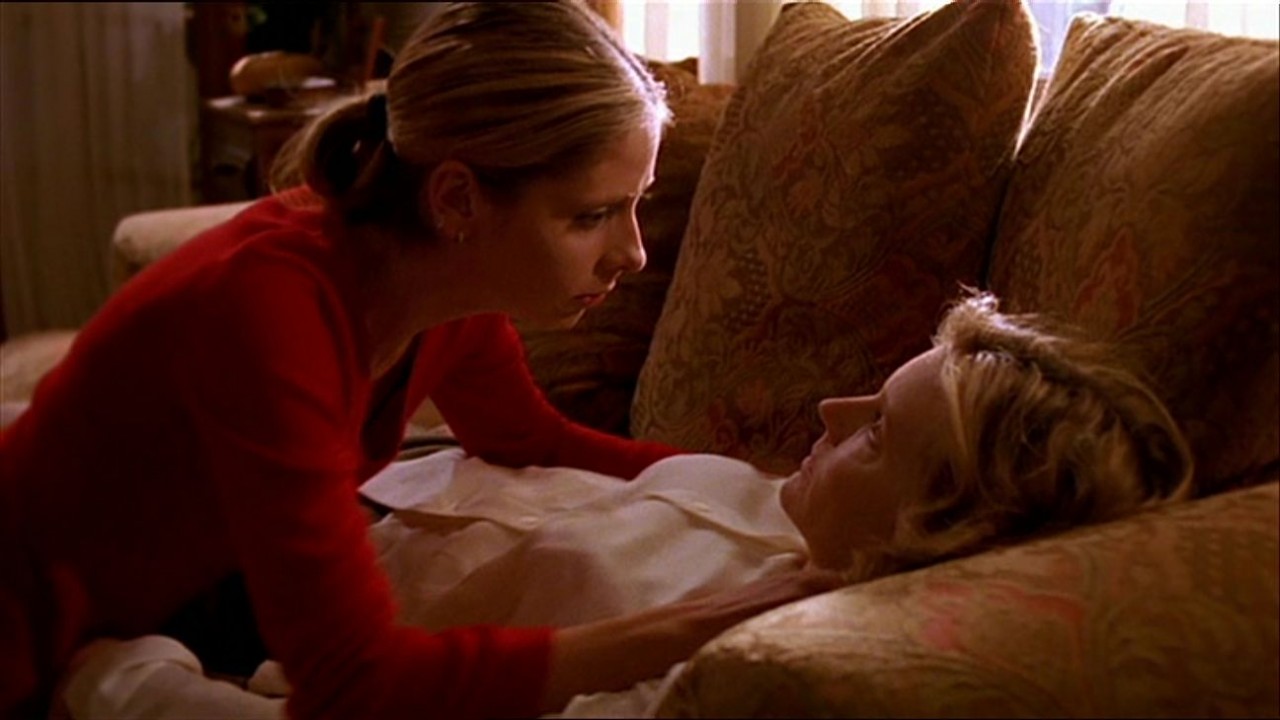 A couple of years later, Buffy suddenly loses her mother to a brain aneurism. Her mother had been sick for some time, but it still comes as a shock to Buffy when she finds her mother’s body. Around that time, Buffy suddenly gets a teenaged sister, Dawn. Most people seem to remember her and believe that she’d been there all along, and Buffy seems to be the only one who doesn’t. Dawn turns out to be the Key to Hell. A previously exiled Hell-Goddess named Glory desperately tries to use Dawn in order to be able to return to Hell, kidnapping Dawn and using her to open a portal. Dawn initially wants to jump into the portal in order to close it, as she is the Key, but Buffy jumps in instead, as the two now share a biological makeup. Buffy sacrifices herself, diving into the portal and closing it from the inside.

Nearly five months after her death, Buffy’s friends use magic to bring her back to life; however, Buffy is not the same. Having reawakened in her grave, Buffy has to face her biggest fear of being buried alive, in a sense. She has to break herself out of her coffin and crawl out of her grave.

When she returns home, Buffy secretly confides in Spike, another “good” vampire, that despite her friends’ beliefs that they rescued her from Hell, she was actually in Heaven,

I was happy. Wherever I was… I was happy… at peace. I knew that everyone I cared about was all right… And I was warm. And I was loved…I think I was in heaven. And now I’m not. I was torn out of there. Pulled out, by my friends. Everything here is hard and bright and violent. Everything I feel, everything I touch. This is Hell. Just getting through the next moment, and the one after that. Knowing what I’ve lost…

An experience like this one – being brought back from the dead, bring ripped out of Heaven, and having to crawl out of your own grave to a violent, angry, unpredictable world, would be traumatizing for just about anyone. For Buffy, who had numerous losses and tragic experiences in her painful life, this was the last straw. Buffy avoids her friends, she has nightmares, she is irritable, she doesn’t seem to enjoy the things that she used to enjoy, she avoids talking about what happened to her, and she engages in a risky, somewhat abusive relationship with Spike. 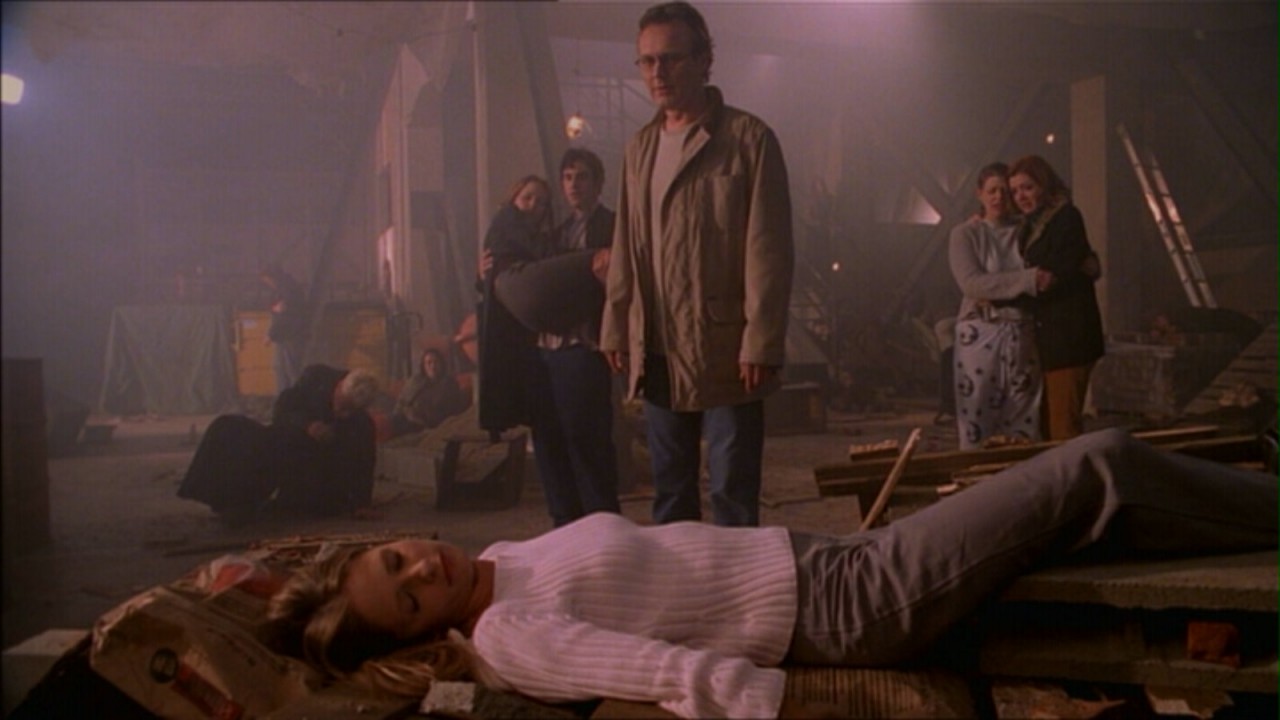 Given the state of her symptoms and knowing a little bit about her history, Buffy may have been experiencing post-traumatic stress disorder (PTSD) and major depressive disorder (MDD).

PTSD is a mental health condition that occurs when someone has experienced or was exposed to (or learned of a loved one who has experienced) a traumatic event with the following symptoms:

When looking at these symptoms, it does appear that Buffy Summers experienced PTSD after she returned from the dead. She certainly meets the criteria for a traumatic event, the symptoms do seem to last for longer than one month, and she seems to meet all of the above mentioned symptom categories.

Since Buffy also has a history of depression (for example, after she had to banish Angel), it would also be important to evaluate her for major depressive disorder (MDD).

MDD is a mental health disorder characterized by 1 or more episodes of at least 5 of the following symptoms for at least 2 weeks. The symptoms must cause severe distress and impairment, and not simply be due to a medical condition or substance use. The bolded text symbolizes the symptoms that Buffy seems to exhibit:

It does seem like Buffy meets the criteria for both PTSD and Major Depressive Disorder, although to officially diagnose her, a therapist would need to conduct a clinical interview with her and possibly have her fill out some assessments, just to confirm the diagnoses. Even though Buffy is greatly affected and, to some extent, is forever changed by her experiences, she does seem to recover. What ultimately helped her get there?

When Buffy first returned from the dead, she was so overwhelmed by her experiences that she couldn’t face them, shutting out everyone around her and only engaging in violent or risky behaviors. In the short term this might have been a bit of a relief for her, because it meant that she didn’t have to deal with her painful feelings; however, in the long term, she felt worse and more disconnected from others. When Buffy was finally able to open up about her experiences, get the support from her friends, and get back to the activities that really mattered to her – helping others, that was when she seemingly started to feel better. 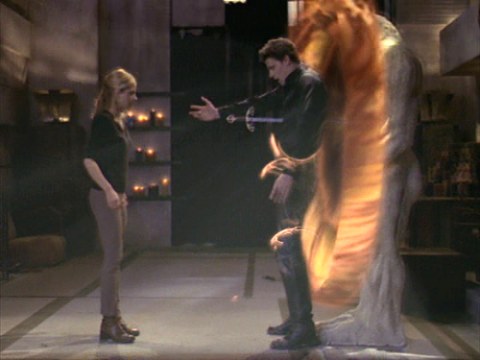 One of the patients I’ve worked with is a sexual assault survivor. She really identified with Buffy especially because, just like Buffy, she also felt alienated from her loved ones. The patient’s family could not understand why, six months after the incident, the patient still had a difficult time with the symptoms and could not simply “get over it.” The patient told me that, like Buffy, she felt that she was pulled out of Heaven and now everything she felt was “excruciating.”

As a part of Superhero Therapy, we watched an episode of Buffy together, the one where she tells Spike about being pulled out of Heaven and feeling like she is in Hell. We then worked on experiencing the client’s feelings with mindful attention and curiosity (this is called acceptance) and worked on her values (the things she cares about the most, like helping others). Over time, like Buffy, this patient was able to reduce her symptoms and was even able to show that same episode of Buffy to her family, helping them understand what she was going through. By getting in touch with her feelings and experiences, by following her values, and connecting with the people she cares about, this person was able to recover from her diagnosis and graduate from therapy.

There are no two characters and no two patients that are exactly alike. Buffy will always have a warm place in my heart as a wonderful reminder that even if the world feels like Hell, things can get better if we let them. By connecting to the very people and actions that mean everything to us, we are more likely to become physically and psychologically resilient, and perhaps, as in the case of Buffy Summers, be able to defeat some monsters along the way.

Check out other entries in the Psychology of Inspirational Women series: Storm, Korra, Carol and Michonne