The Psychology of Inspirational Women: Storm

Even our heroes are scared of something. 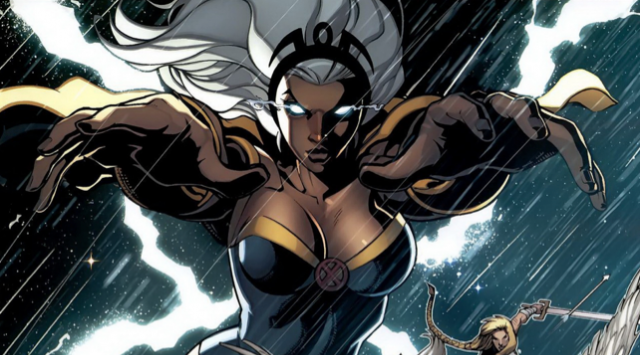 This is the first in our new Psychology of Inspirational Women series, in which Licensed Clinical Psychologist Dr. Janina Scarlet talks us through the mindset of our favorite female characters.

One of the field leaders of the X-Men, Storm (real name Ororo Munroe) has a fascinating history. The daughter of an American photojournalist dad and an African Princess mom, Ororo displayed magical skills from an early age. The women on her mother’s side were known to possess powers equivalent to witchcraft or sorcery, so it’s not surprising that Ororo herself has special abilities. Specifically, she can control the weather, a power that changes along with her mood.

When Ororo was six years old, a plane shot down by the military crashed into her family’s home. The crash killed both of her parents and nearly killed Ororo as well. Little Ororo was trapped for what seemed like an eternity with her parents’ bodies, grief-stricken and terrified. This seems to have traumatized her, as Ororo developed claustrophobia – the fear of small, tight spaces. Eventually, Ororo was able to get out of the rubble by cultivating a windstorm that moved her away from the destruction. This was the first time Ororo experienced her powers, not fully aware of what they meant.

In tune with her spirituality and with Gaea (Mother Earth), Ororo soon felt the urge to travel to Kenya, her native land. On her journey there, however, the 12-year-old Ororo was nearly sexually assaulted by a truck driver. Ororo killed him in self-defense. This experience shook her, and she vowed never to kill again.

The Goddess of Life

When she reached her destination in the Serengeti, Ororo attempted to help a Masai tribe by bringing rain to the region during a terrible drought. As a result, the tribe believed her to be a goddess (the Goddess of Life), and worshipped her as such.  Unfortunately, Ororo did not realize that she was not creating the rain but rather simply moving it from another region. This lead to her inadvertently destroy several habitats, killing hundreds of animals.

Ororo was an adolescent at this point, one who had seen much trauma and one without much guidance. Having lost her parents so young, and taken on the heavy burden of being responsible for an entire tribe at an early age, Ororo often felt alone. Since her emotions interact with her control of the weather, an elder tribeswoman, Ainet, taught Ororo to detach from her emotions and gain more control over the weather elements.

When Charles Xavier approached Ororo, he informed her that she is a mutant. He explained to Ororo that rather than being loved and worshipped as a Goddess, she could be hated as a mutant – but be with other people like her. Ororo, faced with the ultimate choice between what is right and what is easy, chose the former, and joined the X-Men. She then took on a familiar codename: Storm. 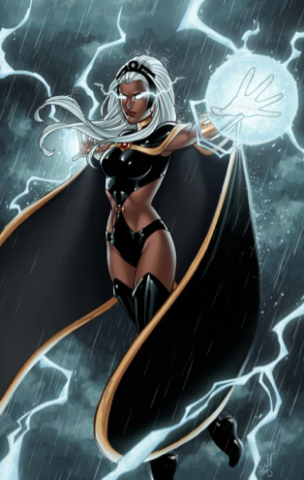 During her time with the X-Men, Storm’s character is tested in a number of different ways. On several occasions she comes face to face with her biggest fear: tight, enclosed spaces, particularly ones where she cannot see the sky. When faced with these situations, Storm feels trapped, just as she did when she was a little girl. Her claustrophobia is initially revealed to the X-Men when Storm, along with fellow X-Man Jean Grey, chases a thief into a New York subway station. Storm experiences a severe panic attack and struggles with being in an enclosed atmosphere.

On another occasion, when the X-men are attacked by Juggernaut, Storm is trapped in a wall of rocks, her situation not terribly unlike the one she experienced as a child. Storm is paralyzed with fear and cries as her fellow X-Men are destroyed by Juggernaut. Only after she is able to see the sky again does Storm fight back for her team. 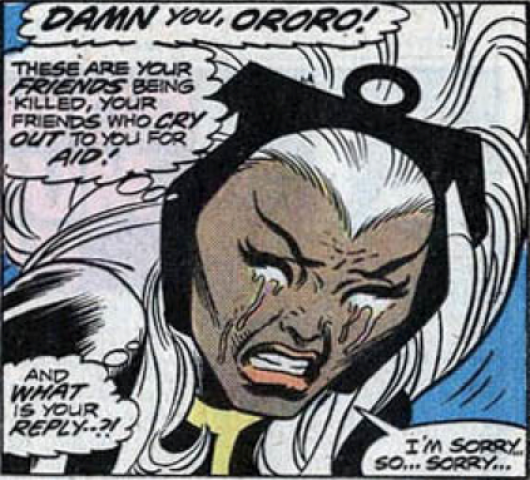 During one of her first tasks as a field leader, Storm faced her fear yet again. Dr. Victor von Doom, an evil villain, encased her into a statue of organic chrome. Terrified, Storm begins to panic, subconsciously manifesting an enormous thunderstorm by warping the weather patterns all over the world. When she frees herself, Storm is close to a psychotic break in her rage. Thankfully, Colossus, a fellow X-Man and a friend, is able to calm her down.

Specific Phobias can be categorized as:

How is claustrophobia treated in therapy?

Claustrophobia is treated the same way as any other Specific Phobia – through exposure therapy. Exposure therapy is a part of cognitive behavioral therapy, aimed to teach us to face our fears in a safe way.

If Storm were my patient, I would initially ask her to retell her story of her being trapped in the wreckage as a little girl. The reason for this is that when a traumatic experience occurs, it needs to be processed. When we make contact with the trauma, when we talk about it, healing begins. Storm seems to have been running away from her past rather than embracing it, as is evident by her reactions to being trapped. Once Ororo was more comfortable talking about her experience of being trapped, I would gradually work with her on being in small, confined spaces (this process is called exposures because we are exposing Storm to her fears). 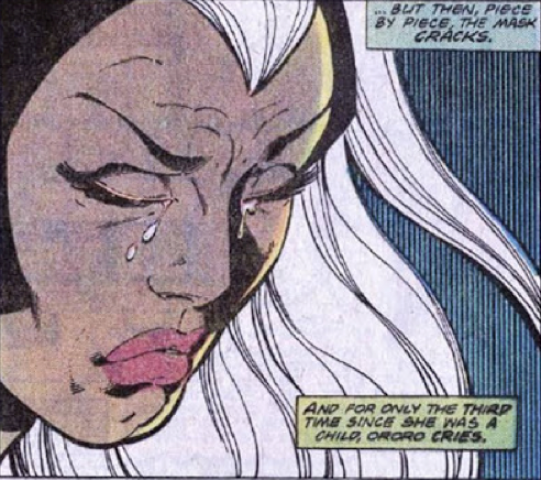 As a part of exposure therapy, Storm and I would begin by spending only a few moments in a somewhat small space together. Over time we would increase the time Storm spends in the confined space, while decreasing the size of the space itself. When people face their fears in such a gradual way, they are usually able to see that the feared situation isn’t dangerous and that they can actually manage to handle it.

I always say that people with anxiety disorders are the bravest people because they face their fears on a daily basis. Storm is no exception. Although she’s been running from both her trauma and herself for many years – even though she gets scared when placed in situations that remind her of her traumatic experience – Ororo eventually learns how to manage her fear. While she is still afraid, she manages to remain in enclosed environments when it comes to protecting people that she loves. For example, when the Morlocks, the New York community of mutant outcasts that live in the underground tunnels, kidnap Angel (and later, Kitty Pryde), Storm goes into the tunnels to rescue them.

Despite the fact that she was in an enclosed tunnel, Storm fought to protect her friends. This says a lot about Storm as a character; mainly, that she values her friends so much that she is willing to face her biggest fears in order to save them. Many of us do not think that we are capable of facing our fears, whether they consist of tight spaces, heights, public speaking, or taking a chance with someone we love. As a result of being scared, we might avoid taking chances on what’s most important to us or wait until we feel brave enough to take that chance. But what if that moment never comes? 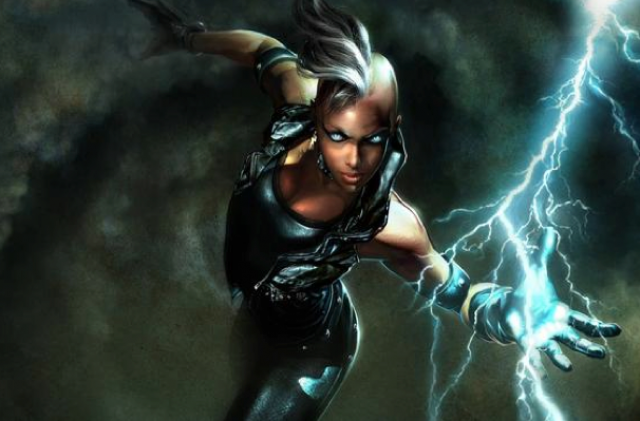 The truth is that most of us are scared. In fact, most of us are scared most of the time. We are scared of many things: failure, success, and humiliation are just some of the things we might be scared about. Many of us cope with our fears by hiding behind them, or avoiding them altogether. Unfortunately, avoidance usually creates the very outcome we are trying to avoid. For example, if we do not take the chance to apply for a job we want because we fear that we will be rejected, the end result will be that we will not get the job at all. We often wait to feel more courageous, mistakenly believing that courage is equated to not having any fear. This is not the case.

Courage refers to taking a chance on what’s most important even if we are afraid. The strange thing is, the more we take chances, the less afraid we might ultimately feel. The courage that comes from us having faced our fears, rather than running away from them, can remind us of the kind of superhero that we want to become. After all, that’s what being a hero is all about.