Things have been pretty quiet in Townsville since 2005 when The Powerpuff Girls went off the air, or at least I assume so. After all, Blossom, Buttercup, and Bubbles would never leave the city in danger. But you might not want to plan a day trip out there on January 20th. My advice? Just sit at home and watch the coverage on TV. Mojo Jojo is up to his old tricks.

The long awaited Powerpuff Girls special finally has an official airdate and musical guest star, courtesy Cartoon Network. On January 20th at 7:30 pm, the girls, the Professor, the Mayor, and Ms. Bellum will return to combat the evil Mojo Jojo. Don’t tell me you don’t know who those folks are, the show is only fifteen years old oh god the Powerpuff Girls is almost old enough to drive. I’m getting verklempt. Talk amongst yourselves about the synopsis:

In Dance Pantsed, why is Mojo Jojo kidnapping a mathematician, an opera singer and a badger? To steal Chemical X, of course, and to finally take over Townsville. But when the Powerpuff Girls thwart his plan, he invents an evil video game called “Dance Pants R-EVILution” to control their minds and bodies to fulfill his evil plot! The Professor must visit his dark dancing past to save his girls so they can save all of Townsville!

But wait, there’s still the special guest to cover. In the role of Townsville’s “most flamboyant mathematician,” Fibonacci Sequins, Ringo Starr himself will be singing I Wish I Was a Powerpuff Girl.

Don’t we all, Ringo. Don’t we all. Here’s the full version of the cropped graphic from the top of the post. Click to embiggen! 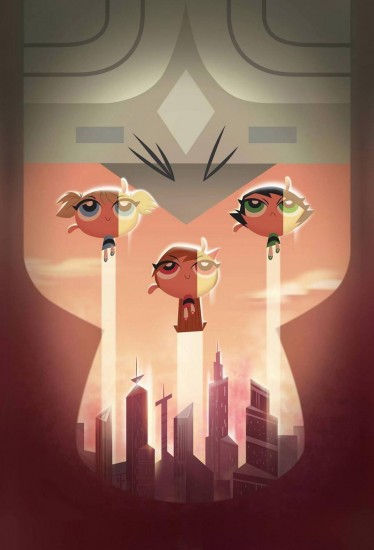