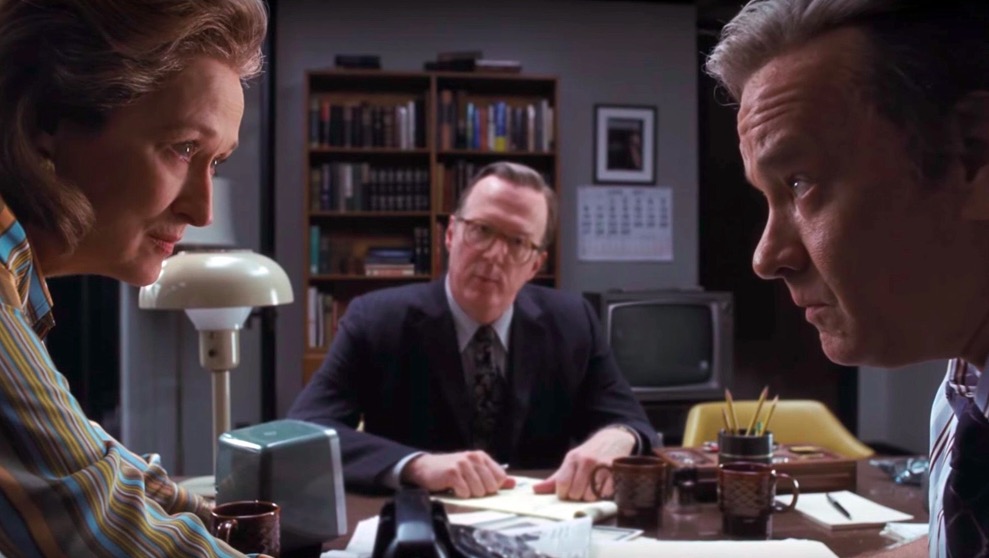 In the same week of the Golden Globes, during which Hollywood elites congratulated themselves and rallied around feminist items like equal pay and intersectionality, comes a film that is similarly touted for depicting a feminist victory—even though it marginalizes its heroine and does the bare minimum to elevate her story.

Don’t get me wrong. Director Steven Spielberg’s The Post is a really strong journalism drama about the important role the press played in exposing the Pentagon Papers and the Watergate investigation amid government suppression, which is obviously very timely today. But what it is not is a feminist film. Sure, it has some feminist retorts and highlights Katharine Graham (Meryl Streep), the first female publisher of a major newspapers (The Washington Post), but it keeps her in the background.

According to this depiction, she was a meek heir to the renowned publication and did not have the confidence to embody her power. Instead, she sat back as her predominantly white male staff took control of her publication right in front of her—until she finally decided to make the boldest move of her career by going to print with the controversial story. That’s fascinating, and a very interesting feminist story that shows a woman of her status owning her power in a way that clearly made her uncomfortable but that she knew was necessary.

But the film only manages to push her further into the margins by talking around her the whole time. The overemphasis on letting us know how insignificant she was to her subordinates further robbed us of her voice. It’s not until maybe ¾ into the film when we finally get to hear from her about what it’s like to be in a room among men and be completely ignored, and how terrified that made her. It’s all of maybe ten minutes long (the movie is nearly two hours long), and then the film goes right back to being the tense journalism drama where the men are driving all the action and calling all the shots. And honestly, that rare scene that finally gives Graham some agency, while at the same time acknowledging her vulnerability and shortcomings, is the best part of the movie, because we’re not expecting it amid all the scenes of rolled up sleeves in the newsroom. Yet once we get a taste of it, we want more. That’s the type of story that can empower even the most disenfranchised viewer, and relegating it to one scene isn’t enough.

It’s fine that Spielberg, along with screenwriters Liz Hannah and Josh Singer, wanted to keep the focus on the journalistic victory, which was in fact historical. I love a good journalism drama. We need good journalism dramas today, but what we don’t need is a film that forces a significant woman in history into the background to further a male-dominated narrative. No, thank you. We should be demanding that a woman like Graham be front and center in her own story, and not shoved off to the margins.

But it’s Streep, and any minute of feminist glory from her is, like, 90 hours for us layfolk, right? We should just praise the fact that she would bless the film in any capacity, even though she is tasked with making magic from a paper-thin portrayal of a Pulitzer Prize-winning giant? Come on.

And while we’re at it, we should talk about the pink elephant in the room. We need to discuss our habit of hailing white female journalist heroes while, at the same time, women of color in journalism have been historically silenced, discredited, and ignored in favor of their male counterparts and, yes, even their white female peers. This cannot continue to be something we enable. How many of us stop to think about, especially after watching movies like The Post and Spotlight, the many women of color who, like Graham, overcame incredible adversity to tell the truth in journalism? Why do we allow the conversation to end with just one (white) woman’s half-told story?

We need to be more vigilant about this, more curious to discover other heroines every single day, and expand their stories so that we can keep the dialogue going. Because the fight continues, and many of us who do fight are women of color who yearn for more stories about complex people like Ida B. Wells, Alma Guillermoprieto, and Claudia Mo. We need to truly acknowledge how shortsighted both media and Hollywood have been in their narratives of women journalists and vow to help change it. We can’t go on preaching about intersectionality and diverse stories and continue to accept the status quo. We have no time for that anymore.

Candice Frederick is an award-winning journalist (ESSENCE), founder of the film blog Reel Talk Online, co-host of the pop culture show Real Live on ABC News Live, and a freelance TV/film critic living in New York City. You can find her work here. Follow her on Twitter.