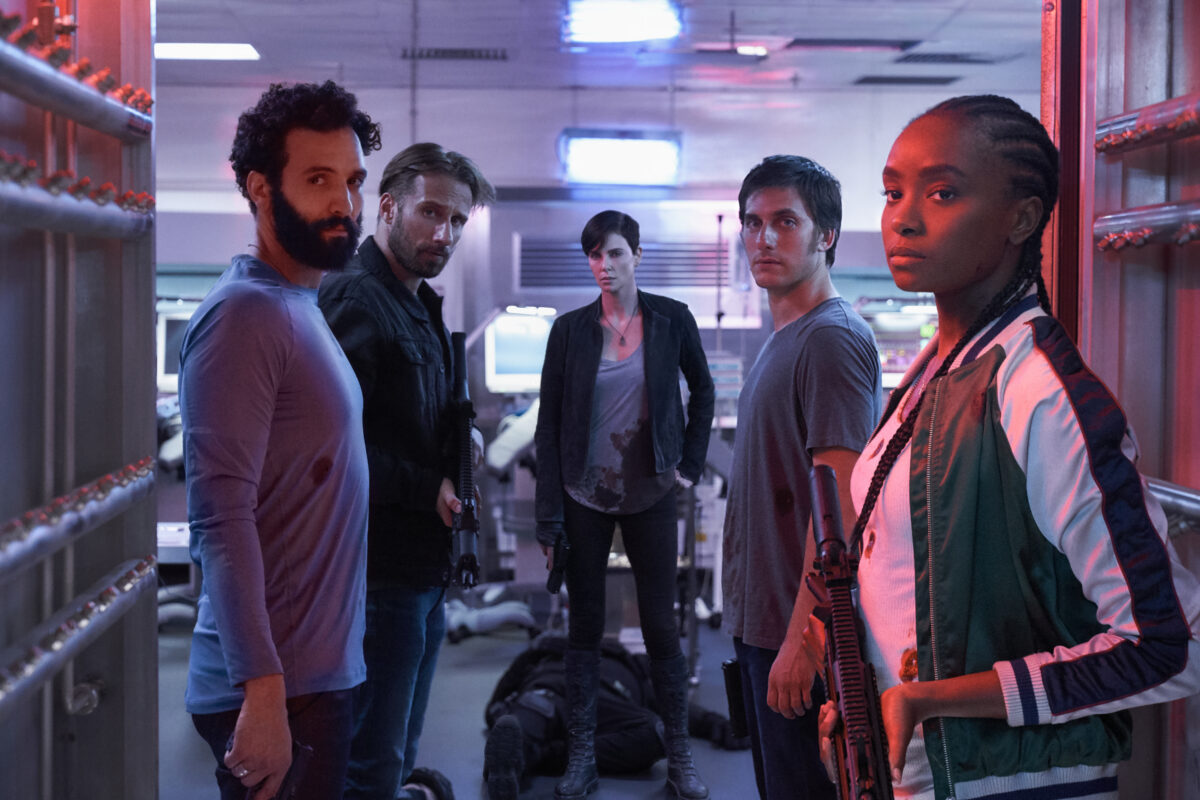 Vulnerability rarely takes center stage in a superhero or science fiction movie. And if it does, it is almost always of a physical nature: an Achilles heel, a magic potion, a poorly placed exhaust port. But in Gina Prince-Bythewood’s The Old Guard, the saga of a band of immortal warriors is steeped in pain, loss, and emotional vulnerability.

Andromache the Scythian, aka Andy (Charlize Theron) is an immortal warrior who has spent centuries fighting for what she thinks is right. She is joined by fellow immortals Joe (Marwan Kenzari) and Nicky (Luca Marinelli), a gay couple who met fighting on opposite sides during the Crusades, and Booker (Matthias Schoenaerts), who joined during the Napoleonic wars.

But Andy is weary. She has died countless times, only to heal and be revived. She’s carried centuries of physical pain and emotional heartache. And no matter what her team accomplishes, all she sees is a world growing ever worse, divided, and violent. After a year off, she rejoins her comrades for a rescue mission in the South Sudan, a job they are hired for by ex-CIA agent Copley (Chiwetel Ejiofor).

Everything changes with the arrival of U.S. Marine Nile Freeman (If Beale Street Could Talk‘s Kiki Layne), who discovers she too is immortal after surviving a deadly attack. Andy is dispatched to recruit Nile and to explain their shared burden.

There are familiar beats to this story, which is based on the graphic novel by Greg Rucka, who also wrote the screenplay. A tired leader trains a rebellious young recruit. A villain who wants to harvest the immortals’ power for his own gain. The exhaustive and alienating life of a being unable to die.

But the film takes it time to explore its characters, giving them backstories, inner conflicts, and deep relationships. Interspersed with the tense, tightly choreographed action are quiet character moments that allow the audience to get invested in their journey. This is largely thanks to the able, patient directing of Gina Prince-Bythewood (Love & Basketball, Beyond the Lights), whose mastery of character is on full display.

The performances are uniformly excellent, with the wildly talented Layne holding her own against the formidable and world-weary Theron. But it is the love story between Joe and Nicky that resonates deeply. Joe delivers a passionate monologue about his undying love for Nicky, a beautiful moment of queer romance that I don’t think has ever been portrayed in a major studio film, let alone in a superhero action movie. It’s a welcome moment of inclusivity in a film that feels effortless, and one I doubt we’d have gotten with a straight cis white male director.

Unlike most action films, which cram every minute with explosions and car chases, The Old Guard achieves a haunting emotional intimacy that is rare for the genre. Prince-Bythewood delves into the intense loneliness of immortality, and the unanswerable questions that plague the team. They don’t know where their powers came from or why, but they do know that one day they will die: a fellow immortal finally succumbed to his wounds centuries earlier, while another suffers a fate worse than death. With each injury they experience, they are left to wonder whether or not they will return to life.

The film ends by setting up a sequel, which I hope we get to see. With The Old Guard, Gina Prince-Bythewood has revitalized the superhero genre and delivered what may be the best film of the year. I can’t wait to see what she does next.