The Mary Sue’s Interview with Sara Seager of Planetary Resources, A.K.A., Those Folks Who Want to Mine Asteroids | The Mary Sue

The Mary Sue’s Interview with Sara Seager of Planetary Resources, A.K.A., Those Folks Who Want to Mine Asteroids 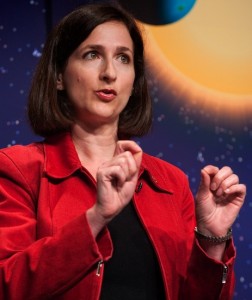 For those who haven’t heard, Planetary Resources is a company founded by a group of scientists and millionaires with the eventual goal of mining near-Earth asteroids for natural resources. Sara Seager, Professor of Planetary Science at MIT, is an advisor on the core Planetary Resources team. She spoke to The Mary Sue about her groundbreaking work with research into exoplanets and the search for other life in the Universe, and about being involved with Planetary Resources and their incredible ambitions.

Jordan Erica Webber: You’ve done some amazing work in the field of planetary science. What first got you interested in that area of physics?

Sara Seager: One of my first memories is of the moon following me. As a small chid, I couldn’t understand why the moon would follow while I was in the car; no matter how far the car went, or how many times the car turned, the moon was still there.

Another of my vivid early memories is of the stars. When I was about ten years old and on my first camping trip, in Ontario, I remember awakening late one night, stepping outside the tent, and looking up. I was completely stunned by what I saw. Stars – millions of them, it seemed – filled the entire sky. I had never imagined that there was such a vast expanse beyond Earth.

So, I was always interested in astronomy. I became interested in planetary science mostly after I began studying exoplanets, in the mid 1990s.

JW: So your love for astronomy goes way back. Were you ever told astrophysics was not an appropriate path for you, as a woman, to take?

SS: Yes, but not for the reasons you would expect. My late father hammered into me, ‘You must be able to support yourself and not rely on any man.’ He told me astrophysics was not an appropriate path because I wouldn’t be able to get a job that paid highly enough to support myself. He wanted me to be a dermatologist, an easy, low-responsibility, money-making career where I could work part-time to have time for a family, and still bring in the cash.

His advice about being able to support myself was so great in the end, because I recently became a widow, yet I can still support myself and my children in the way I want (travelling to rocket launches, hiking mountains all over the world).

JW: What advice would you give to young girls interested in astronomy and considering turning that interest into a career, as you did?

SS: My advice is always, ‘Find something you love doing that you are also good at.’ This takes time, so make sure your time outside of school is not overcommitted to structured activities.

More specific advice is to take math and physics classes so that you have the appropriate background for astronomy and planetary science study. Read books – so many great popular level books are accessible to a high school level audience. Find a summer internship at a local college to give you experience and confirm that a career in astronomy is what you are interested in.

JW: What would you say are your proudest achievements from your time spent studying planetary science?

SS: My proudest achievements are always those yet to come! In this case, my upcoming work on biosignature gases is my favorite, which will ultimately tell us whether or not a distant exoplanet is inhabited.

Looking back, my proudest achievements in the field were laying down the foundation for the study of exoplanet atmospheres and other exoplanet characterization tools. A related outcome was the prediction of sodium gas on a kind of planet we call a ‘hot Jupiter’, which led to the first detection of an exoplanet atmosphere.

JW: With regard to exoplanets, what led you to consider that, ‘For exoplanets, anything is possible under the laws of physics and chemistry?’

SS: Exoplanets come in all sizes, masses, and orbits imaginable. Surprising discoveries are still happening. For example, who would have guessed that there could be a planetary system – called Kepler 11 – with five of its six detected planets having orbits all inferior to that of Mercury? And these six planets are not tiny planets like Mercury; some are up to two times the size of the Earth. What are a bunch of relatively big planets doing all squeezed into such compact orbits? There are many, many other examples of exotic planets and planetary systems, yet all obey the laws of physics and chemistry, hence my maxim.

JW: So do you think the search for exoplanets will lead to discovering life on planets other than our own any time soon?

SS: When will we find an Earth? Identifying a true Earth twin (orbiting a sun-like star) will take about 25 years, because it relies on developing technology and building a highly sophisticated space telescope, as yet to be planned.

There is, however, a fast track to finding an inhabited world, and that relates to big Earths orbiting small, low luminosity stars. In this case, we could find a planet with signs of life in a decade if the right pool of planets, around bright enough stars, are discovered, and if we can use tons of time on NASA’s James Webb Space Telescope, to try to observe their atmospheres.

When we do find signs of life, it will be via ‘biosignature gases’ in the exoplanet atmospheres. These are gases that, like oxygen (and to some extent methane and nitrous oxide, and others), are generated by life and can accumulate in the planet’s atmosphere.

JW: Do you see any benefits for this work with exoplanets from the plans the Planetary Resources Corporation has to mine asteroids?

SS: Absolutely, yes. While NASA succeeds with big, complex space science missions (think about the Mars Science Laboratory, a mission of over $2 billion, with ten science instruments), these space missions for astronomy are few and far between. The highly successful Kepler Space Telescope, for example, took over 25 years from concept to launch. Most of space science would benefit tremendously from cheaper, more frequent launch capability for smaller, more specialized space science missions. A sustainable commercial spaceflight business – one that is not supported by NASA contracts – is required to reduce the costs and increase the launch opportunities. I support any efforts for a self-sustaining spaceflight business.

JW: What other benefits do you think will come from asteroid mining?

SS: For the investors, wealth. For the private commercial space flight industry, the eventual opening up of space to robotic and human interplanetary travel, by using asteroids as refueling stations (via the extraction of water and conversion to make rocket fuel). To the science community, cheaper, more frequent launches to low Earth orbit and far beyond.

JW: How did you come to be a member of the advisory team?

SS: Planetary Resources is interested in building upon small-space telescope technology that my MIT team (in partnership with Draper Labs) has been developing. I’ve been working with Planetary Resources for about a year, while the company was under the different name of Arkyd Astronautics.

Planetary Resources approached me to be an advisor to the team about a year ago. I would think that it was space technology knowledge and broad general knowledge of space science that was attractive to them. Their advisory board has members with a very wide range of skills and only a couple of scientists on board.

JW: That advisory team has obviously been selected on the merits of its members, but the website has you listed as the only woman; would you have liked there to be more female advisors involved?

SS: I hadn’t really thought about the lack of women on the Planetary Resources team until now (though there is at least one female engineer employed by Planetary Resources). What I would like to see is more women willing to take risks and find ways to make their own big ideas get launched.

In my opinion, the roots of the problem of why women are still often missing from the highest and most exciting echelons run deep, and are related to society’s conditioning of girls’ natural instincts.

JW: Why was the decision to send robots to these asteroids, and not humans, made?

SS: No one wants to see people getting killed in space. The costs associated with human safety in spae travel are enormous as compared to robotic tasking.

JW: Obviously you can’t give many details at the moment, but could you give a brief overview of how the process will work?

SS: In terms of mining an asteroid, let’s just say significant research and development is still needed to figure out the best method. At the same time, we know how to get to an asteroid, land on another planet or moon in our solar system, and we know how to get off the moon and return to Earth. NASA even has a mission to scoop up two ounces of an asteroid material and bring it back to Earth (a $1 billion mission called OSIRIS-REx, with which I am involved in the MIT-Harvard student instrument REXIS).

What is needed is to determine how to be cost effective, and how to mine in an extremely low surface gravity environment. Planetary Resources and others have talked about capturing an asteroid and bringing it into a high lunar orbit. The Keck Institute for Space Studies studied the concept of capturing and bringing back a seven meter, 500,000 kg asteroid to high lunar orbit for humans to travel back and forth to, for mining for resource extraction.

JW: How will Planetary Resources select their target asteroids?

SS: Planetary Resources will use standard methods of observing their surfaces to identify metal-rich or water-rich asteroids.

JW: How long will we have to wait to see asteroid mining happen?

SS: Peter Diamandis (Planetary Resources co-founded and co-chairman) has been quoted in the media as saying it could happen by 2020. In the meantime, Planetary Resources is trying to establish a sustainable business by developing a series of space telescopes and spacecraft. You can find out more at their website: http://www.planetaryresources.com/technology/

JW: Thank you very much for speaking with us.

To find out more about Sara Seager’s search for life on exoplanets, you can download her ebook for free at http://seagerexoplanets.mit.edu/books.htm

If you are interested in building space hardware, Sara recommends finding a university working under the CubeSat program (http://www.cubesat.org/) and getting involved.

Jordan Erica Webber is the editor of Godiva Gamers, but also blogs here.