The Mary Sue Exclusive Interview With the Creators of Avatar and The Legend of Korra! 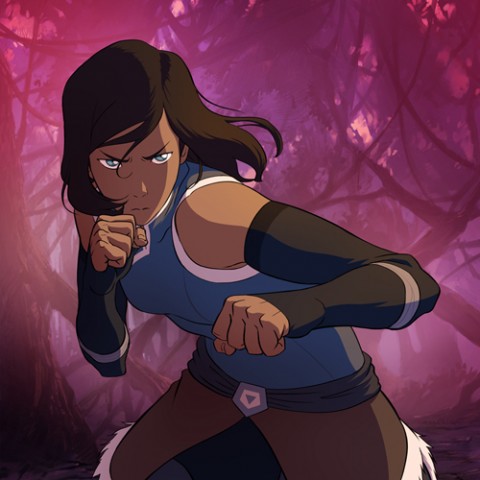 This past Thursday at New York Comic Con we got the rare opportunity to sit down with Michael Dante DiMartino and Bryan Konietzko and pepper them with questions about Korra and Aang, the upcoming themes of The Legend of Korra: Book Four, and writing their characters as young adults rather than older teens. We even got our own scoop: Bryan’s favorite weird animal hybrid from the upcoming season.

Okay, so it’s a little scoop, but now you’re definitely going to read the article, aren’t you?

Michael Dante DiMartino: I know! We can’t talk about what’s next, ’cause we’re still trying to figure that out.

Konietzko: We’re we’re still full-time on Korra until the end of the year, and then we’ll be taking a little break. We’ll come back sometime next year with some new ideas, maybe. But this is kinda the end of Avatar for the moment, at least.

TMS: Are there a lot of conflicting feelings there or…?

DiMartino: (Laughter) It’s a little bittersweet. I mean, obviously we’ve been in this world for almost twelve, fourteen years—

DiMartino: Yeah, twelve years. So, yeah, it’s been a very significant portion of my career now. Our careers. But I’m ready to move on, try some new things.

TMS: Do you think Korra and Aang represent opposites?

Konietzko: Definitely. Yeah, we were just talking about that earlier today. That was the intention. That was very deliberate. When Nickelodeon, in 2009, told us they wanted us to come back and do another series where we could do whatever we wanted, the first thought we had was: Let’s do a story about the next Avatar. That was the first thought. The second thought was: Let’s make it a girl. And we didn’t just stop there, we wanted everything about Korra, pretty much everything, to be different than Aang, to be opposites. Aang was this peaceful monk, a little trickster who wanted to kinda hide from the problems and not shoulder responsibility. He had to learn to become the hero, and we wanted Korra to be the fighter, to be really a go-getter, she wanted the responsibility, she reveled in it, in her title. But she had to learn to let go of her ego and become a more balanced spiritual being. And so in a lot of ways they had opposite arcs. A lot of things mirror each other in their development, but yeah they were kind of on opposite paths. It was deliberate; it kinda worked out?

DiMartino: And it just got me thinking, the Avatar is master of all the elements and most powerful being and all this stuff, but really, through the stories we’ve told, it’s more about how these people who do have all this power—how they figure out what to do with it. Yeah, Korra could just show up and demolish an entire city if she really wanted to, but the point is that’s not really the best way of using the Avatar’s strength and abilities. It’s kinda more of this personal evolution.

TMS: Do you feel like viewers have been more critical of Korra’s personality than of Aang’s?

DiMartino. For sure. But it’s funny. I think now they sympathize with her more, in a general sense. And I think when you look at all the seasons together when it’s all said and done, it makes sense. Yeah, some of the things she’s said and done were very brash and off-the-cuff and not well thought out. And that was kinda the point, you know, she had to go do that stuff to get to the point where she is now.

Konietzko: Yeah, I think she—we love writing flawed characters. We didn’t want to make her like: “How do we make the most likable character?” Because then those characters are kinda shallow, you know, there’s not a lot of depth there. And we like having really human characters who make mistakes. It’s certainly arguable that maybe we coulda handled some of those scenes better or something so that people… got it? I don’t know. But who’s to say? I think the cumulative effect of her character arc works. At least for us and what we were aiming for. But it is funny. We heard, especially during the first half of Book Two, when I was here last year—Was that just last year? It’s crazy; we already aired all of Book Three. Um, yeah—One of the questions I got was like: “Korra sucks, why did you do that? Why did you make her suck?,” and it was just like… I laughed, I was like “All right, well, you know…” But then Book Three, we just saw people embracing her and defending her, and really feeling empathy for her and a connection. Which is cool, it’s nice that people have stuck around for her journey. And you can’t really look back and obsess over where we lost connection with the audience. I mean, it’s important to recognize that, but we just have to do what we’re setting out to do. Do our best and then you kind of move on.

TMS: Yeah, it seems like—this isn’t really a question, but, Book Three—the refocusing on the air nation was very… it made them travel, which sort of felt like the old series a bit more. And also it was really fascinating to watch the air nation evolve from not just being—I mean, for a generation it’s been about preserving Aang’s memories of his culture, and then to watch it have to incorporate other people was fascinating.

Konietzko: I think Korra was more likable in book three because—but that was actually part of her arc that we’d set out to do—is that she was becoming more selfless and it wasn’t just about her own stuff. The Book Two story, we thought it would be interesting—the Avatar is supposed to be this impartial figure of balance. But if the Avatar had a personal stake in a war, like her family, that would be really hard. And so that was the story we were trying to do, and unfortunately maybe the romance stuff clouded it, or people didn’t really connect to it. But I think with Book Three, one reason I think it worked so well is there’s a really dark storm brewing, but there’s a very positive story leading it forth. This building of a nation; that’s what gives a positive selfless goal for Korra.

DiMartino: Totally, and obviously the history of the Avatar mythology, like having the Air Nation be a viable nation again, is a big deal. We really wanted to have her have this very big sacrificial moment to save this culture that was on the brink of being extinct again.

DiMartino: Yeah, that’s the kinda the conflict. You’ve got this history, this lineage of monarchs and the queen and everything. As Su Beifong would point out, it’s an outdated system that’s not working.

Konietzko: Not helping anybody.

DiMartino: Yeah, and then Zahir comes along, throws it all into chaos. So yeah, we will fill in the pieces as the episodes go on. But the general idea is the Earth Kingdom fell into this kind of chaotic system and people were fighting each other and it was a very unsavory situation, and that’s where Kuvira kind of came in to help. Her intentions are good, to restore the peace and get things back on track.

Konietzko: It’s just how she goes about it, and her ego, her ambition, gets the better of her.

TMS: With the time jump between Book Three and Book Four you’re now writing about characters who are in their twenties. Is that a fun transition compared to the young teens of Avatar, or a weird one?

Konietzko: I liked it.

DeMartino: It’s not radically different, but we are aware that they are a little different. I think you see it most in Bolin, because he was the least grown up of them and he definitely has some more mature moments.

Konietzko: I think even with Mako, too, stuck in a job he hates, is a more adult kind of thing. When he was young he was the hotshot, an athlete and good looking guy, and now he’s just in this job he hates and doesn’t really have a life. That’s a very adult-type story.

DiMartino: And you see Asami who’s the head of this company now and is pretty young.

DiMartino: Yeah, so there are kinda subtle changes, but I feel like the core of their characters are still very much there. No one radically changed into a different person.

TMS: I’m just gonna give you one little last quick one: are there any weird animal hybrids that didn’t make it into the show that you really wish had?

Konietzko: Didn’t make it in?

DiMartino: Hmm, I don’t know. We’ve had a lot of weird ones.