Give it to me NOW. 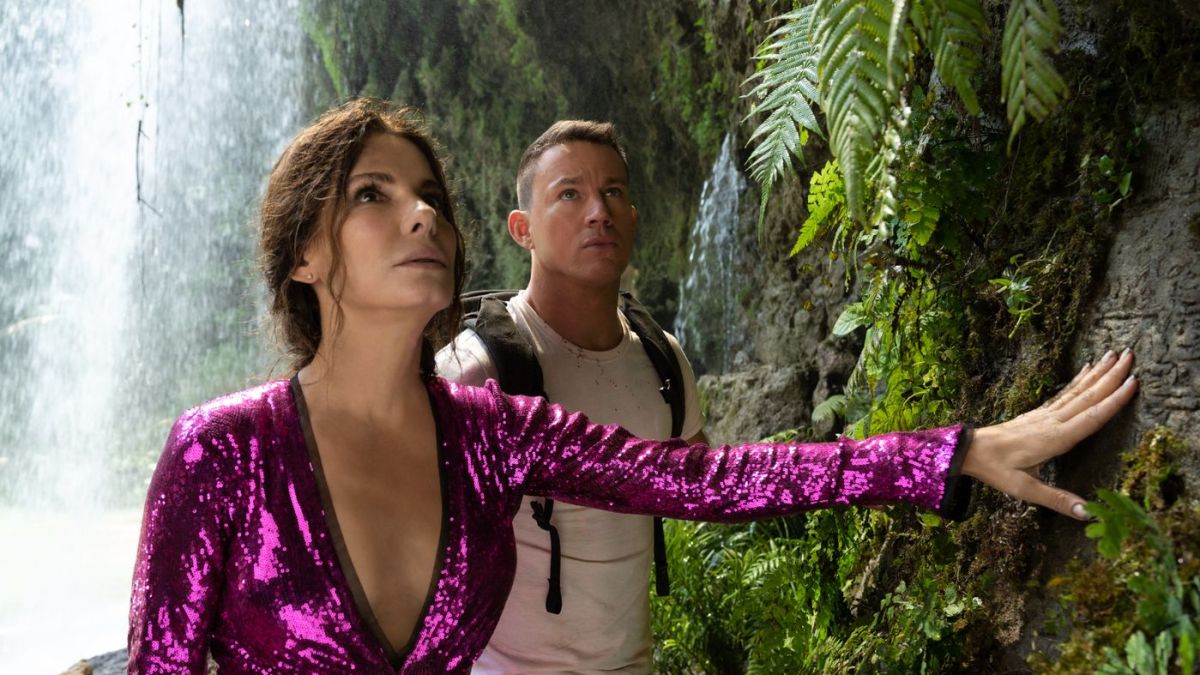 You have two choices today when you go to the movies: comic book adaptations or the next installment in whatever mega franchise is hot right now. It’s cliché to say that Hollywood has run out of ideas, but never before has the theatrical film landscape been so flattened, with nary an original story to be found. There have always been four quadrant family blockbusters, but we used to have romantic comedies, courtroom dramas, mysteries, thrillers … most of which have largely moved to television as the streaming landscape takes over.

So when something with a whiff of originality shows up, audiences are hungry for it. And I didn’t realize just how starved I was for an romantic adventure until I saw the trailer for the Sandra Bullock and Channing Tatum’s new romantic comedy The Lost City. Take a look:

First off, there is plenty of chemistry and silliness in the intro bit, where Bullock and Tatum roll back the doors to reveal the trailer, but instead reveal an awkward, jumpy Daniel Radcliffe. The three seem to be having fun, and we’re having fun too.

The Lost City centers on reclusive romance novelist Loretta Sage (Bullock), who is due to promote her latest book, The Lost City of D. Joining her is her handsome cover model Alan (Tatum), who embodies her romantic hero “Dash”, so much so that he answers to the name. But when wealthy baddie Fairfax (Radcliffe) kidnaps Loretta in an effort to find the real lost city, Alan decides to stage a one-man rescue mission despite having no survival skills whatsoever.

Brad Pitt joins the film as a legitimate rescue leader and comic foil to Tatum. In addition, the film features Da’Vine Joy Randolph, Patti Harrison, Bowen Yang, and Oscar Nunez. The film, directed by Adam Nee and Aaron Nee, is a spin on romantic adventure classics like Romancing the Stone or Raiders of the Lost Ark.

Tatum noted the similarities, saying “They just don’t make movies like that anymore. This is sort of one of those moments to see if we can land on a new version of that sort of genre movie… This is a completely unique, original story.” Bullock added, “That’s what’s so much fun about it, you can take old setups and easily make them new. And the fun thing about the male-female narrative is that now we can turn it on its ear because it’s no longer, ‘This is the woman’s role. This is the man’s role.’ You can mess with all of that and create a whole new dynamic. And that’s sort of what we did.”

Disney’s Jungle Cruise tread similar territory, delivering on family-friendly action and swashbuckling adventure. And like The Lost City, it also featured two charismatic leads in Dwayne Johnson and Emily Blunt. It’s especially exciting to see Bullock back in the romantic comedy genre where she thrives, after strong but dour turns in Bird Box and The Unforgivable.