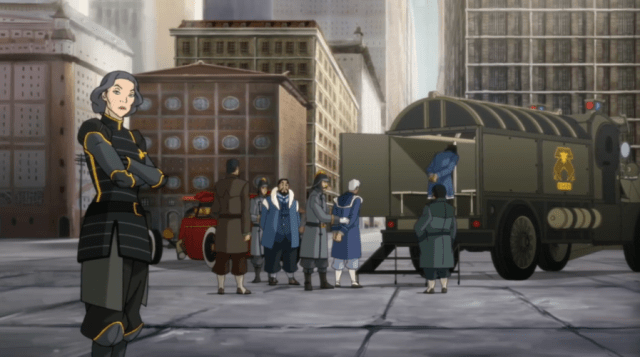 If you’re behind, catch up with the rest of our Korra newbie recaps!

Recap’s over; everybody leave.

Fine. I guess I’ll recap other, less important things about this episode.

Korra and her krew have returned to Republic City, where Lin immediately greets the Avatar by thanking her for starting a war. Oh, Lin, how I’ve missed you!

Mako’s assigned to work the Southern Water Tribe peace march that’s happening that night. Korra wants to go, too, and she doesn’t take kindly to Mako’s suggestion that, as the Avatar, she might want to at least look like she’s neutral. But Korra’s determined to support her people, even if it pisses off the members of the Northern Water Tribe living in the city, so she marches in the parade anyway. (In my favorite detail from this episode, one of the bystanders at the protest can be heard shouting “GET A REAL JOB.”)

Things go pear-shaped, but it’s not because of anything Korra did. (Which is unexpected, frankly… she’s not exactly good at keeping situations from escalating.) A Firebender blows up the Southern Water Tribe’s cultural center (PG Nickelodeon terrorism!), leaving behind a sort of detonator as a clue. Mako, who sees the whole thing go down, isn’t convinced that the North is responsible, but Korra doesn’t need pesky “evidence” to make her 100% certain that her uncle’s men are behind the attack.

This is why the US invaded Iraq, Korra.

Quick aside for “Peacekeepers’” B-plot: Meelo tries to train a flying lemur. He’s bad at it. Tenzin teaches him about animal training and gets a few sassy zingers about headstrong idiots in in the process. Meelo eventually trains a lemur army before realizing he actually just likes playing with them, instead. I feel like the showrunners agreed to pay J.K. Simmons a set amount for the season, so they’re determined to get their money’s worth by bringing him in for some bullshit storyline every single episode until he rejoins the main plot. (Which should be soon, now that Korra’s ditched Unalaq as her teacher, right?) I love JK Simmons, but I kind of think radio guy saying “AND TENZIN IS STILL ON HIS HISTORY VACATION LEARNING ABOUT THE VALUE OF FAMILY AND HAVING TEA PARTIES WITH SKY BISON” during the “previously on” segments would have been a better choice.

Varrick and Korra go to meet with the President, whom we first see pulling Korra into a photo op. Not a good sign. Inevitably, he refuses to send troops to help the South, arguing that the Civil War is an internal matter and not something he should get otherwise uninvolved troops caught up in. The President comes off as a condescending, self-involved dick who’s only concerned with his public image, but… he does have a point here. I mean, appeasement, escalation, etc. etc., but I totally get how he’s not too inclined to listen to a teenager bursting into his office and demanding ALL THE TROOPS, even if she is the Avatar. His refusal, which should serve as a starting point for negotiation, just makes Korra all rage-y, because she is bad at diplomacy at politics and could still use that particular set of training wheels. Why does no one realize this?! Someone bring Tenzin back!

Meanwhile, Unalaq sends Eska and Desna after Korra, because it turns out he does need her to open the Northern Spirit Portal, even though he told her last episode that he didn’t. The siblings take off, Eska ready to bust some skulls after Korra’s (perceived) poaching of her boytoy Bolin.

Speaking of Bolin, he’s been taken under Varrick’s wing. The pair of them go to a pro bending match, where Bolin discovers that it’s fun and easy to make people love him. Ohhh, Bolin. I loved you ages ago.

Korra and Asami—having their first, quasi-awkward interaction of the season—go to see Varrick, Korra to get his opinion on the troop situation, Asami to ask about bringing her company back from the brink of death. Varrick eats a hot pepper and hangs upside down to bring about one of his “idea storms,” which makes the ideas come “FAST AND FURIOUS.”

Varrick’s solutions are mutiny and war profiteering, respectively: Korra should ask General Iroh to engage in war with the North without the President’s permission, and Asami should sell SatoCorp’s Jaegers to the troops. Neither of those plans can possibly end badly. Varrick’s other ideas, however… 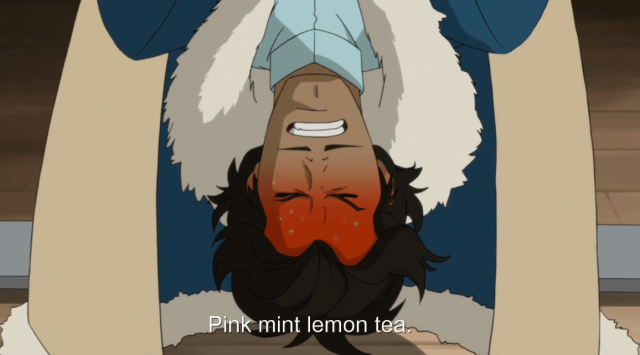 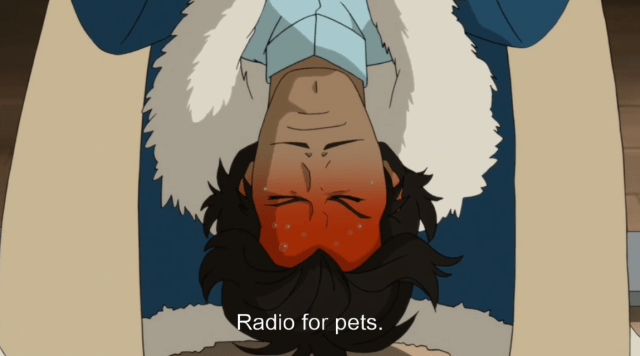 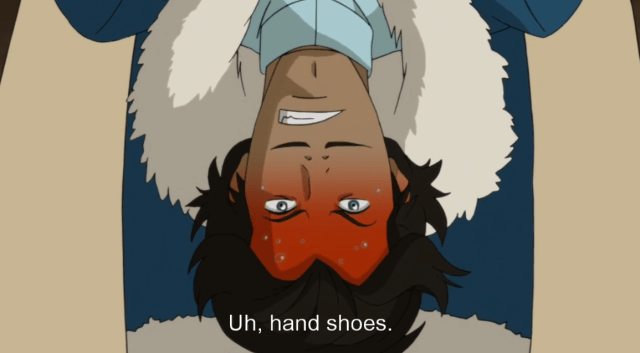 GOLDMINES. If we don’t see someone wearing hand shoes later in this series, I am going to be so pissed.

Varrick, seeing dollar signs in Bolin’s abs, casts his new BFF in a propaganda video that will increase public support for the Southern Water Tribe. This doesn’t have much bearing on the plot at this point, but I’d like to point out two things. One: Ginger, the female star of the film, actually wears more clothes than Bolin does, which I find hilarious for some reason. Two, Asami’s face: 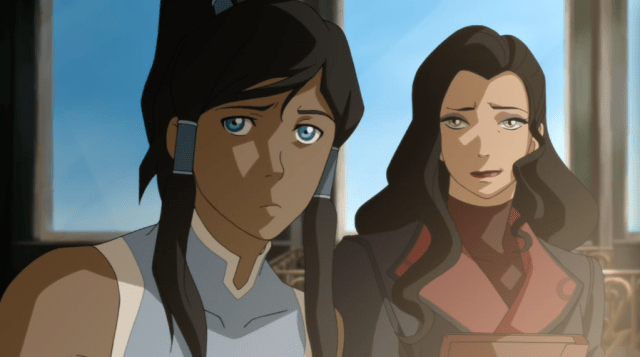 Mako, who’s on the President’s side with this whole “maybe don’t dive headfirst into a World War quite yet” thing, thinks Korra’s idea to go straight to Iroh’s troops—which he hears about from Bolin—is Grade A stupid. But he has his hands busy with investigating the identity of the bomber, which he finds by looking at a crime yearbook: 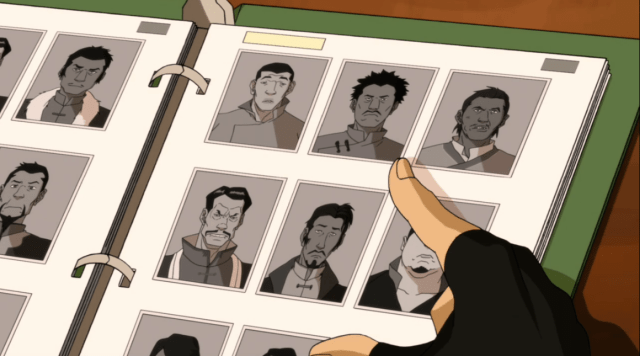 He goes to his superiors at the police station, only to find that they don’t give a shit and are already convinced the North did it. The President, who’s on hand to bust Lin’s chops and knows Mako’s dating the Avatar, asks Mako if there’s anything about Korra’s activities that he wants to get off his chest.

And YYYYUUUPPPPP—Mako blabs. Which I think he should have done, actually. The gulf between my approval of most things Mako does and my complete and utter don’tgiveafuck-ness about him as a character is vast and deep.

The President busts into Korra’s meeting with Iroh—who was totally going to have her back, by the by, because apparently he inherited some of Zuko’s stupid—and helpfully reminds him that engaging in battles without permission is actually totally against the law, and why are you taking military advice from a teenager with no political or military experience anyway, hmmmmm?

His hands now tied, Iroh suggests that Korra ask the Fire Lord for help. YES YES GO TO THE FIRE LORD. DO THAT. ZUKOOOOOOOOOO.

Bolin lets slip that Mako knew about Korra’s plan to go behind the President’s back. Korra, deducing that her boyfriend must have sold her out, goes down to the police station and pitches an unholy shit-fit that leads to a fight that leads to an AIRBENDER DESK FLIP (someone’s giffed that, right?) that leads to Korrra and Mako breaking up. 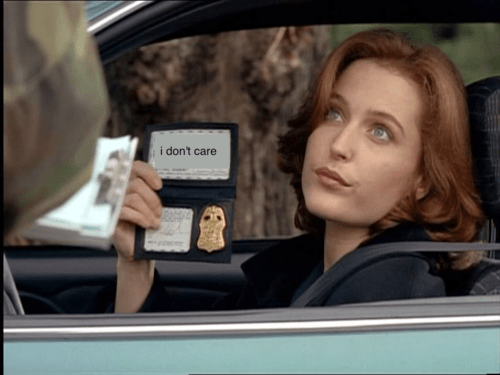 Lin, who’s done nothing but nothing this episode, comes out of her office and asks what the fuck’s going on. Mako tells her that he and Korra called it quits, and Lin makes a quip about how “you should have seen Air Temple Island after Tenzin broke up with me.” I was hoping for something more along the lines of  “…. I don’t understand why you think I give a single shit about your relationship status,” but that’s because I’m projecting.

We end the episode with Korra jetting off to meet the Fire Lord, pursued by Eska and Desna. After a brief chase, Cthulhu shows up and attacks Korra, which causes Eska and Desna to peace right the fuck out. Korra’s attempt to hypnotize the spirit works until it doesn’t, and the thing (looks like it) eats her. 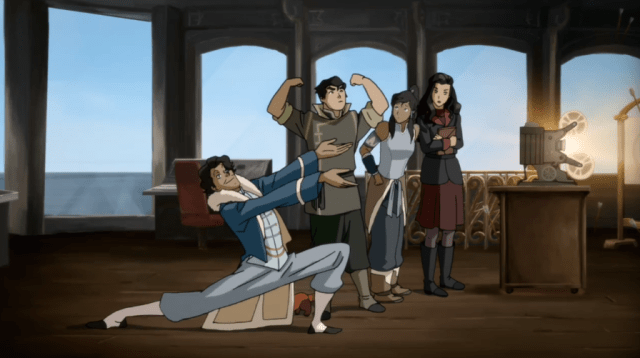