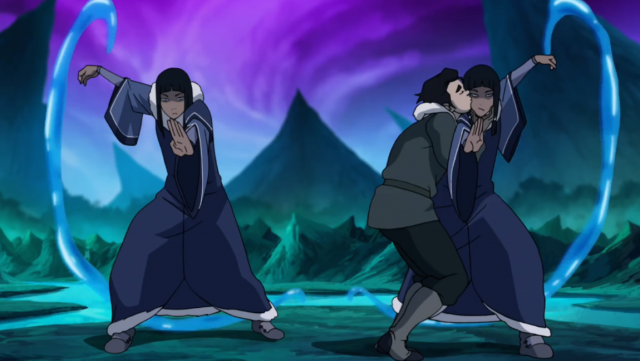 Korra‘s season two finale is worthy of the rest of the season, which is to say it isn’t that good. I’ve thought in the past that maybe I’ve been too harsh towards this season, that my expectations had been unfairly elevated by how great ATLA was. But… nah. This season hasn’t been awful, but the storytelling’s still whackadoodle.

General Iroh gets a brief and semi-pointless guest appearance at the beginning of this episode, when Unavaatu (aka Unalaq+Vaatu)  shows up in Republic City to bust the place up. “I need to know what kind of enemy we’re dealing with!,” Iroh demands of the President. 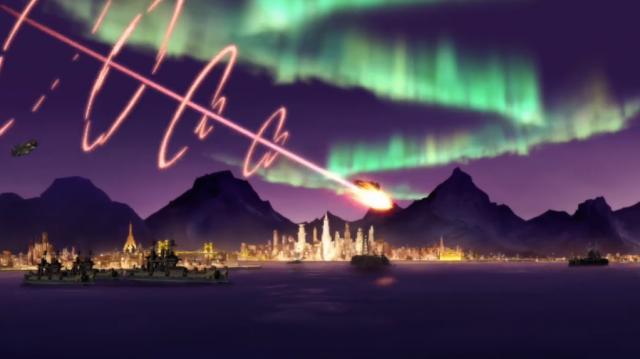 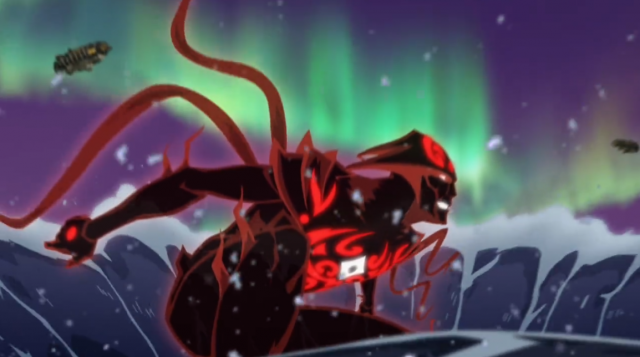 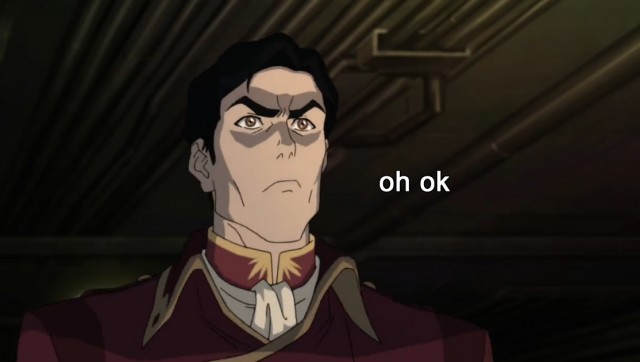 Iroh is completely useless, like season one Zuko, and Unavaatu manages to defeat him and destroy Aang’s statue. Dante Basco goes back into the wings until the showrunners decide to call him back to stoke waning fan enthusiasm again, I guess.

Lin’s slightly more effective: when the blimp she and the President are on is lit on fire by Unavaatu, she uses her metalbending to rescue him—again, from a burning blimp falling out of the sky—with barely even a change in facial expression. I hope this is an indication that Lin will start not-sucking again in season three. Meanwhile, Unalaq’s attack on Republic City gives Varrick and Zhu Li a chance to escape from their executive-level jail cell. Bless.

Back at the North Pole, Tenzin, Kya and Bumi take an unconscious Korra, Bolin, and Mako into the spirit world, where they’re dunked into spirit water and healed. Tenzin honest-to-God asks Korra whether she was able to stop Unalaq and Vaatu. 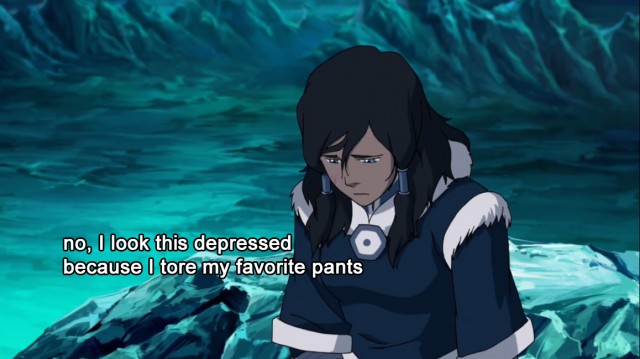 Tenzin goes into pep talk mode, telling Korra that he was admittedly too distracted by his daddy issues to be as effective a mentor as he could have been, but he has all that shit sorted out now, so he’s ready to dole out some wisdom. Just as he’s not defined by who his father is, she’s not defined by being the Avatar. Just because her spiritual connection with Raava—and with her past lives—is broken doesn’t mean her “inner spirit” is in any way lessened. She can go into the tree that served as Vaatu’s prison—the “tree of time,” which binds the physical and spirit worlds together and contains all the world’s memories or some vague shit—and connect to the “cosmic energy of the universe.” She can bend with that, not the elements, and still have the power to defeat Raava. So she does, meditating and connecting with the “light within the dark” until she turns into a jolly blue spirit giant.

This is dumb on so many levels. “Wan became the Avatar because he was awesome, not the other way around, and so are you, so you should have no problem connecting with the deus ex tree and blah blah magic.” By that logic, couldn’t anyone who shares Korra’s virtues do the exact same thing? They’re just bullshitting the mythology at this point. It makes no sense! The writers spent a whole season creating this massive problem for Korra to solve, and then they pull a convenient solution out of their asses at the last minute with absolutely no buildup! It’s Heroes season one-level anticlimactic.

And we have two seasons left! How can any baddie possibly pose a threat to Korra now that it’s established that even when she’s not even the Avatar anymore she can literally tap into the cosmic energy of the universe and become a big blue meanie powerful enough to quite handily defeat the literal incarnation of everything bad in the universe.

What the fuck ever.

Korra uses her newfound phenomenal cosmic powers (…iiiiitty bitty living space) to book it to Republic City, where she and Unavaatu proceed to wail on each other. Given there’s more than half the episode left at this point, I assumed there’d be some sort of plot twist, and the tree bullshit wasn’t actually going to be the way she’d defeat the big bad, but no… that’s all there is. Admittedly, at one point Unavaatu almost wins until Jinora floats down from the sky with with Raava like Tinkerbell Jesus. So my babynerd queen Jinora did save the day, ultimately, which is pretty cool.

Still, the rest of the episode seems like the writers had no clue at the beginning of the season how they were going to end it, so they had to make some shit up. Back at the spirit portal, Mako, Bolin, Tenzin, Kya and Bumi fight dark spirits; Mako and Bolin almost get their asses kicked, until Eska and Desna show up to rescue them. Korra uses her spirit mojo to absorb Unavaatu (or something) right before Harmonic Convergence ends. She goes back to the spirit world, the dark spirits go away, Jinora’s spirit goes back to her body, and Korra re-absorbs Raava, turning her into the Avatar yet again, though her connection to the past Avatars is still severed. The whole BIG! CLIMACTIC! CONFRONTATION! between her and Unalaq took like ten minutes.

Anyway. In the midst of everyone freaking out about how they won, Korra realizes that Eska and Desna’s dad is now dead, so maybe she should try to comfort them or something. The twins say that their dad was evil, so they won’t miss him at all, but you know it’s not cut-and-dried as all that.  Eska and Desna grappling over the significance of their father’s actions and their loyalty to him became low-key one of my favorite parts of the last few episodes. It feels more ATLAesque, which is to say it feels personal. On the other hand, it seems to have no emotional significance to Korra, near the end, that Unalaq is her uncle and that she’s therefore in a situation where she has to kill a member of her family. The show should at least pay lip service to the effect that would have on someone! Avatar always did that well: Focusing huge, history-making events (e.g. the return of Sozin’s comet) through the prism of what it means, on an individual level, to the people involved in them (e.g. Aang wrestling with the fact that he doesn’t think he can kill someone). Instead, we get big neon kaiju punching each other in the face.

There are still a few threads to wrap up: Bolin wants to get back together with Eska, but she says that, though she still has feelings for him, she and her brother have shit to do now that their dad and the ruler of their tribe is dead, so maybe they should call it quits. Korra decides that maybe Unalaq was right about how the spirit and human worlds should be as one, so she decides to leave the portals open; humans can now travel into the spirit world freely, and vice versa. Mako tries to tell Korra about their breakup, but she tells him she saw it herself in the memory tree (fuck the memory tree). She asks why he didn’t tell her about it before, and his answer is that part of him didn’t want them to have broken up in the first place. No “…but also I was dating Asami again, and as such I recognize that wanting to retroactively cancel our breakup would be shitty at best, cheating at worst.” But wait, who’s Asami? Asami who? We don’t care about her feelings, apparently.

Man, this love triangle isn’t even well-constructed. Anyway, Mako and Korra break up for good (I hope). THANK GOD. It’s all teary and emotional, and they say they’ll always love each other, LIKE I CARE. Seriously, was anyone actually invested in this relationship while the show was airing? Because it’s such, such poorly written bullshit.

Finally, Korra gives a big speech about how the Northern and Southern Water Tribes are separate now, and her dad will be the chief of the Southern Tribe, and oh by the way the portals are open now, but I’ll still be dealing with spiritual-type shit because blah blah blah, there’s been a shift in the planet’s energy, blah blah blahh, completely unsubtle set-up for season three.

Season two of Korra: Eff you very much and goodbye. 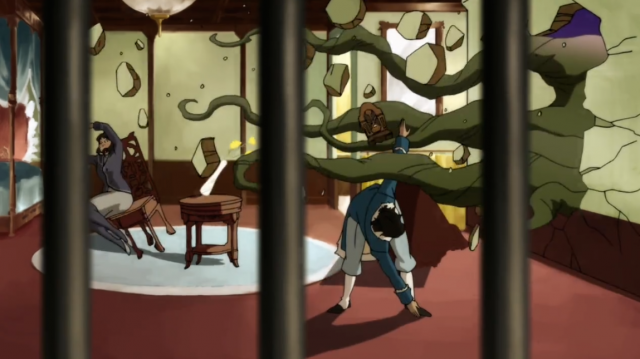 HOUSEKEEPING NOTE: I’ll be taking next week off, because I’m going to a pirate-themed wedding, and there are priorities. Check back on Thursday, November 12 for my recap of the season three premiere, “A Breath of Fresh Air.” I hope it really is.