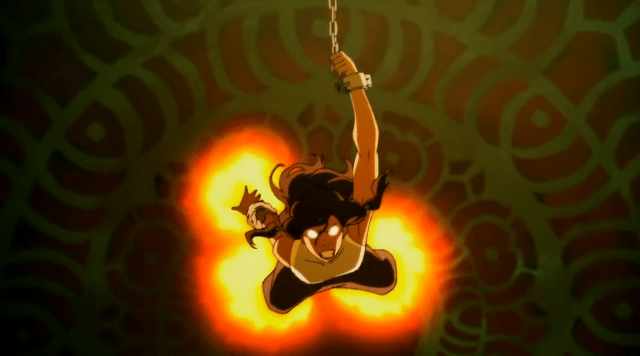 Welcome to the season three finale, in which Korra fights a religious fundamentalist supervillain and Jinora saves the day through being a low-key badass. Wait. They just took a mulligan on the season two finale, didn’t they?

We start right where last episode left off—with Korra hanging around (har har) in the clutches of the Red Lotus, who are about dose her with poison. Fighting of said poison will force Korra to go into the Avatar state, after which the Red Lotus will (in theory) immediately kill her, bringing an end to the Avatar line. Zaheer says a lot of stuff about VIVE LA REVOLUTION and his “band of brothers and sisters in anarchy.” Funny, he doesn’t look like a college student who’s just taken his first PoliSci class. Force Ghost Jinora, eavesdropping on the proceedings, is not impressed, and neither am I. 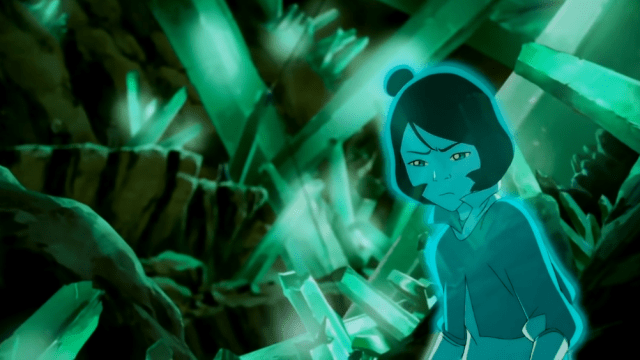 The captured airbenders, with a mission assist from a Korra-less Team Avatar, manage to escape from the Red Lotus. The following exchange takes place:

Kai: Why? Just because I was blown out of the sky and fell hundreds of feet down a cliff? Don’t you know it take more than that to get rid of me?

BRB, eyerolling into the apocalypse.

Meanwhile, the poison has Korra full-on tripping balls, but not in a fun, Momo and Appa fight scene way. 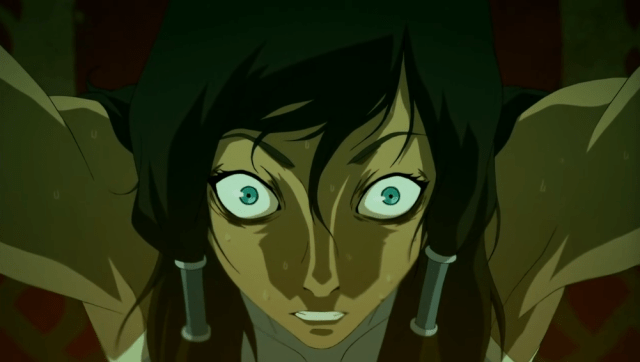 Despite a valiant effort, she does eventually switch into Avatar state, after which she proceeds to break free from her shackles and absolutely wail on Zaheer and his buds BECAUSE SHE’S THE FUCKING AVATAR AND SHE’S IN BEAST MODE. He thought their just-kill-the-Avatar-when-she’s-locked-up-it’ll-be-fiiiine plan would be SO. EASY. Pssht. Libertarians, man. 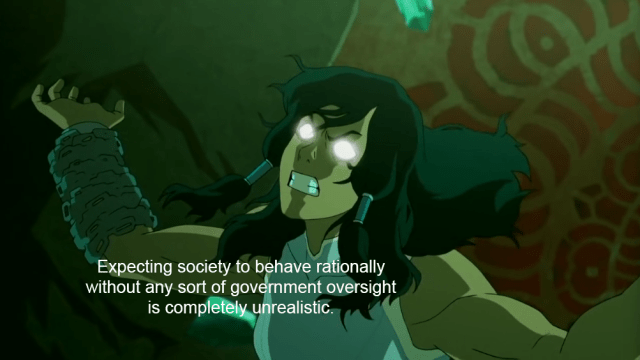 Tonraq, Mako and Bolin show up to rescue Korra, and their faces when they see how very, very much Korra does not need rescuing are priceless. 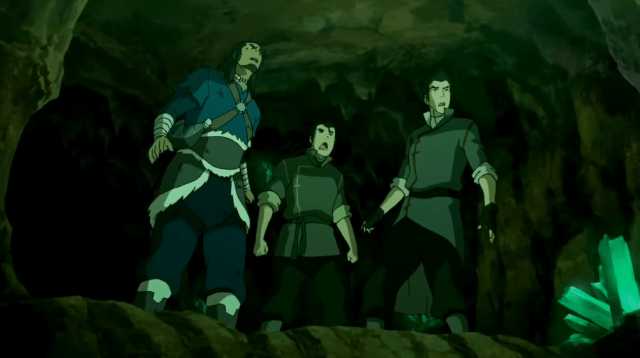 Tonraq goes off to help his daughter fight Zaher—the two of them zoom around like Channing Tatum on his space rollerskates in Jupiter Ascending, only without the royalty-sniffing bees and that part where Mila Kunis accidentally said she likes to fuck dogs—while Mako and Bolin stay behind to fight Lava Guy and Water Girl one last time. Teach them how to say goodbye, Ghazan and Ming-Hua!

Over the course of this season, my feelings on Zaheer have gone from “wooooah, he’s badass” to “whatever, jackass *jerkoff motion*,” but I gotta say, this episode finally gives me a favorite S3 Korra villain. Only it’s Ghazan, not Zaheer. Ghazan’s fucking awesome! His entire reaction to finding out Bolin can lavabend is “Sweet, dude, that’s awesome! Still gotta fight you now, though.”

Eventually—as we know they must—Bolin and Mako defeat their villainous counterparts. Mako takes out Ming-Hua by electrocuting her with lightning. (Did he … have that skill before? “Electrocuting the minion with water for arms” seems like it would have been the thing to have done episodes ago if Mako already knew how to generate lighting, but his reaction to finally offing her was less “Wow, a new thing I couldn’t do before!” than “Hmm. OK.”) Ghazan just lavas the whole place and essentially commits suicide, hoping to take Mako and Bolin with him (he fails), because “I’m not going back to prison.” Zaheer’s all like ANARCHY BLAH BLAH BLAH RULE OF THE PEOPLE BLAH BLAH BLAH DOWN WITH WORLD LEADERS BLAH BLAH BLAH. And then there’s Ghazan: “Revolution I guess, but prison food just really sucks, y’know?” Ghazan only joined the Red Lotus to impress Ming-Hua and secretly doesn’t think Hillary Clinton is all that bad. I am convinced. So let it be written!

While Avatar state-Korra would normally have no problem defeating a jumped-up little shit like Zaheer who’s only been bending for like a month, there is the small matter of “deadly poison running through her system,” so she’s getting her ass kicked rather substantially. Down on the ground, Jinora comes up with “make a giant tornado” as a solution. Y’know, giant tornados aren’t normally the best thing in any given situation, so I say when you have a chance to make one, go for it. The tornado begins to suck Korra and Zaheer back down to earth; Zaheer almost escapes, but Korra uses the chain still attached to her wrist as a whip and drags him back down, after which she immediately collapses. Though shit looks pretty dire for our heroine, Su saves her life by bending the poison, which is metal-based, out of her. Zaheer starts ranting about how CHAOS IS THE NATURAL ORDER until Bolin sticks a sock in his mouth.

So there we go: The evil is defeated. Zaheer’s been put back in a presumably even more high-security prison; P’li, Ghazan and Ming Hua are all dead, and Kuvira is waiting in the wings to become our next Big Bad. Things don’t end on a high note, though. Two weeks after Zaheer’s great and powerful ass-kicking, Korra’s still recovering from the effects of the poison. She appears to be suffering not only physically, but emotionally, as well. The President, immediately after sucking up to Korra, tactlessly ruminates about how, really, how dare Korra be sick, because between the Red Lotus still being out there and the Earth Kingdom having descended into chaos she has SHIT. TO. DO. Tenzin takes some time out of Jinora’s big Airbending Master induction ceremony (’bout damn time!) to announce that, while the Avatar recovers, the airbenders will become nomads again, roaming around the world solving people’s problems and attempting to restore balance. We end season three we a single perfect tear situation: 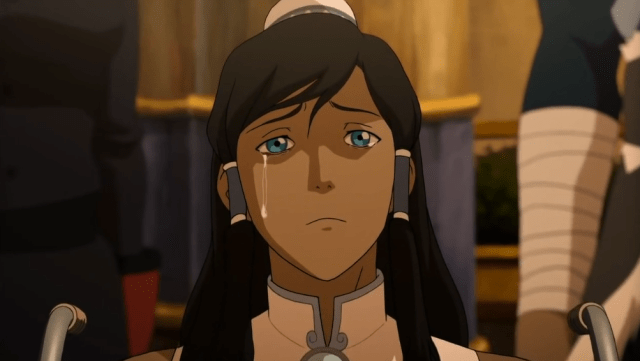 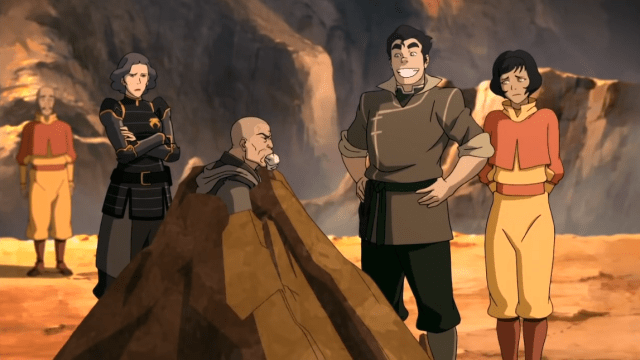