The Legend of Korra Newbie Recap: “In Harm’s Way” 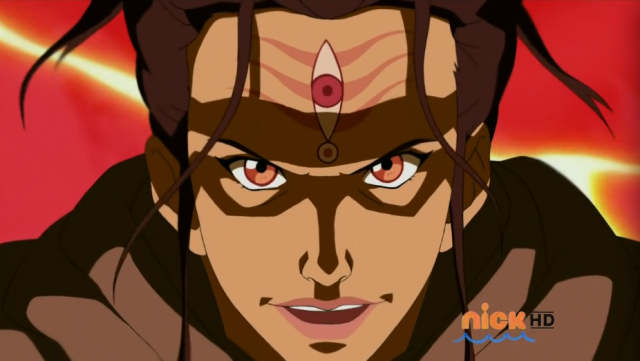 I don’t know exactly what Zaheer and his crew are up to, but they’re so cool I almost want them to win.

We start this episode with Zaheer the airbender, Ghazan the earthbender, and Ming-Hua the waterbender popping into the Northern Water Tribe’s secret prison to rescue P’li, a firebender/Queen of Explosions. Eska, Desna, Tonraq, Zuko, and Zuko’s dragon (yay Zuko’s dragon!) put up a good fight… OK, a halfway decent fight… but the Evil Planeteers are successful, and they ride off into the sunset in a snowmobile. Later, we (and Korra) learn that the reason these four are so scary is that, shortly after Korra was discovered to be the Avatar, they attempted to kidnap her, which is why Korra was spirited away by the White Lotus and grew up in virtual isolation from the rest of the world.

More importantly: Zaheer and P’li get their mack on as they escape, and Ghazan the scary badass lavabender whines like Fred Savage from The Princess Bride about kissing stuff, ewwwww. It’s adorable.

Last episode, I’d hoped we might get some more Ba Sing Se revolution action, but alas, it is not to be. (At least not for now.) Mako and Bolin make use of stolen passports to get back to the Upper Ring, where they inform Korra and Asami about the secret army of kidnapped airbenders. Immediately afterwards, the Earth Queen shows up to tell them they can leave now, kthx. Korra’s efforts to play it casual are… finger guns, Korra? Really? 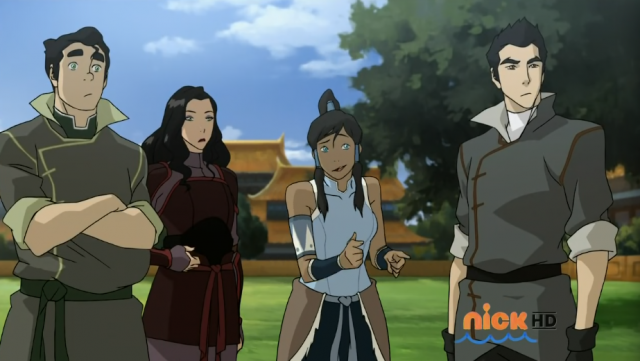 Asami makes up a story about their air Winnebago needing repairs, so they need to stay an extra day, whoops! Later, at a Team Avatar meeting, Bolin awkwardly notes that technically the Earth Queen conscripting airbenders isn’t illegal–he’s keeping Bumi’s tradition of providing stupid-sounding but actually relevant information going–and Mako mentions that the airbenders might be in the hidden fortress under Lake Laogai. What?! He watched Avatar!  He knows this shit!

Coming to the rescue YET AGAIN is Jinora, who’s more competent than like half the adults on this show. Turns out she can still go all Force ghost, so she pops under Lake Laogai to see if the airbenders are there. Turns out they’re not, so Jinora uses her spiritual connection with Kai to track them down under the Earth Queen’s temple.

While everyone’s planning their grand rescue operation, who should show up but Lin Beifong, who tells Korra that those assholes who tried to kidnap you when you were a toddler are back, so you need to book it to Republic City now. Korra refuses to leave without the airbenders, so Lin says fine, I guess I’ll stay and help you rescue them so you don’t die. And you know Lin being involved means Operation Save the Airbenders is going to go off without a hitch, because this isn’t season two, and Lin doesn’t suck anymore.

While all this is going on, Kai’s been having a not-so-fun time of things in airbender boot camp. Refusing to attack a little weenie compatriot of his lands him in the crosshairs of one of the guards, and when he attacks that guard, he ends up in solitary confinement. So the rescue party is split into three groups: Bumi, Korra, and Tenzin go after the bulk of the airbenders; Mako, Bolin, and Jinora go after Kai; and Lin and Asami stay on the airships as the getaway drivers.

The rescue op is going pretty well until Mako, Bolin, Jinora, and Kai get attacked by guards and Bumi, Korra, Tenzin, and the rest of the airbenders run into the Earth Queen and a bunch of her elite earthbenders on the way out of the temple. The Queen hearkens back to what Bolin said earlier: That she’s the Queen of Ba Sing Se, God dammit, so she has every right to press her citizens into service. If Korra takes them, she’s committing an act of war.

The airbenders manage to hold off the earthbender guards with a giant wall of air, which is a bit weird considering all of them except Tenzin, Asami, and Bumi have been training for a month, max. Everything ends well, with the good guys all escaping and Uggi the air bison saving the day by making the Earth Queen sneeze a lot. Deus ex allergies!

Tenzin offers the new airbenders the chance to come with him and train. They all agree, and Tenzin gets teary-eyed. Aww, bro. Turns out “Hey, it’s a better option than living in hiding as a fugitive because you’ve committed treason against a despotic monarch” was all he needed for his Air Nomad recruitment campaign. 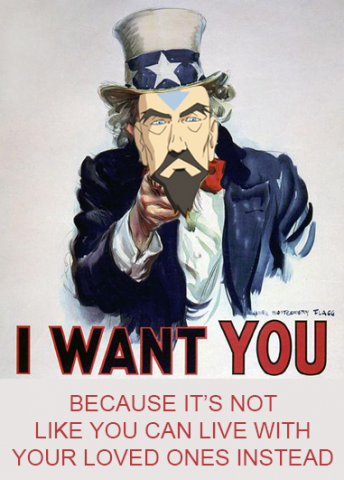 Korra, after saying goodbye to Tenzin, goes back to Republic City to hopefully not be killed.

This was an OK episode. I guess? It wasn’t the most riveting, but it also wasn’t season two. I really wanted some more Earth Kingdom politics. Sigh. 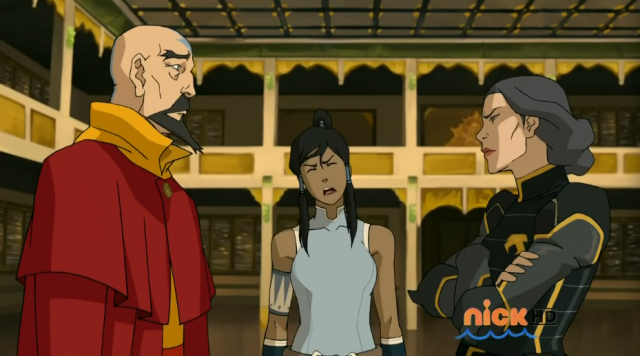 Tenzin and Korra react to Lin telling them to do things: a microcosm.