The Legend of Korra Newbie Recap: “The Earth Queen” 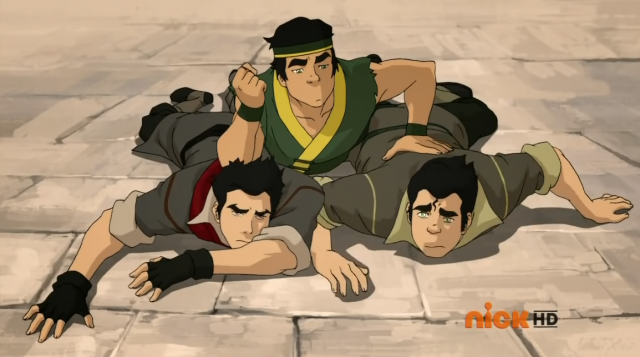 Damn, Ba Sing Se, get your shit together. It’s always something with you.

Now that Team Avatar has scoured the outlying Earth Kingdom cities and ended up with one newbie airbender to add to their ranks, they’re on the way to Ba Sing Se, which just so happens to be where Mako and Bolin’s father grew up. Bolin is full dog-sticking-his-head-out-of-a-window as they approach the city, while Korra is a bit more cautious; as the Avatar, she’ll have to play friendly with the Earth Queen, who is reportedly quite “demanding.”

After passing over the outer (aka the slums) and middle rings of Ba Sing Se, our heroes reach the schmancy part of town, where they’re given a quick lesson by the Queen’s  mousy assistant as to just how terrifying his boss is. I want Joo Dee back, dammit. Kai, going back on that whole “the airbending made me a new man!” thing has was spouting last  episode, fucks off to use his newfound powers to engage in a spot of pickpocketing.

Meanwhile, Korra meets the Queen. She’s very Bea Arthur-y (gravelly voice, “I am surrounded by idiots”), but without the ultimately being a good person thing. She’s also intensely bitter that the United Republic was built on Earth Kingdom territory and resentful of the Avatar, since she blames Aang and Zuko for suckering her father Bumi into giving away prime real estate. Furthermore (whine, whine, whine), the Earth Kingdom is in dire financial straits because some subjects refuse to pay taxes, and the taxes that are collected from the outlying territories are often stolen by bandits. The Queen claims to have no clue about there being airbenders in Ba Sing Se but says she’ll cooperate with Korra if she goes and collects a shipment of tax money. VWOOP, VWOOP, BULLSHIT ALERT.

Korra and Asami go on a date out in the air Winnebago to pick up the taxes, only when they get there they’re attacked by Mad Max characters.

No, I mean bandits. 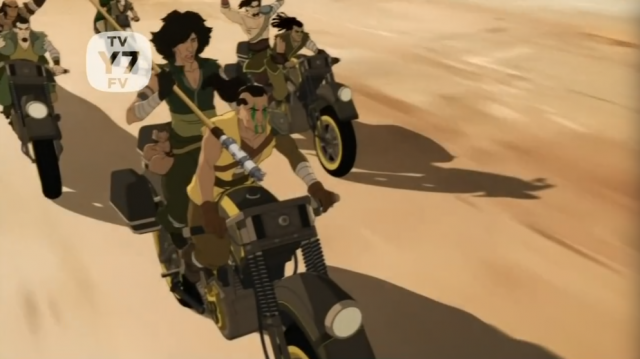 Asami and Korra take out this band of scary-ass, motorcycle wielding bandits in like three minutes, but as the ostensible villains zoom away from the terrifying teenage girls they yell that Korra’s on the wrong side of the fight. And, yeeeahhhh… pretty obvious that the Queen’s extorting huge amounts of money from her already-impoverished subjects so she can maintain her sweet-ass topiary gardens. Korra belived Kai last episode when he said he was being hunted by bandits, too. Stop believing everyone, Korra! Be more cynical and bitter! Come to the Dark Side.

Anyway, Korra delivers the money to the Queen, who tells her full-stop that there are no airbenders in Ba Sing Se. GEE, THAT SOUNDS FAMILIAR.

Korra goes full capslock and tells the Queen that she’s a scumball for extorting her citizens, and also Korra’s going to find the airbenders no matter what, and also fuck you.

While all this has been going on, Mako and Bolin have gone out looking for Kai and realized that he’s been stealing things. A chase sequence ends with the brothers trapped in the lower ring with no way to get back to the upper level because they don’t have the proper papers. (Jesus fuck, Ba Sing Se is more of a Terry Gilliam-esque hellscape than I remember.)

They spend the night outside, and the next morning they meet a fruit vendor who looks suspiciously like Bolin. Turns out he’s actually their first cousin–Tu, son of Chow, their father’s brother. All of Bolin’s hyperbolic sobbing that Mako should come to Ba Sing Se because they might meet their long-lost grandmother comes true! The brothers have a reunion with a sizeable extended family, all of whom live in the poverty-stricken lower ring. It’s great, except for the part where Mako and Bolin have to tell their grandmother that her son’s been dead for years.

Mako gives his grandmother his dad’s old scarf, which is sweet. He and Bolin also learn from their new family that new airbenders across Ba Sing Se are being plucked off the streets by the Dai Lee. (Fuckin’ Dai Lee.) The episode ends with Kai being kidnapped and thrown into a pit with the rest of the airbenders, who have been pressed into service in the Earth Queen’s army.

I’m really looking forward to the Ba Sing Se uprising subplot that appears to be brewing, by the by. Mako and Bolin clearly have a personal interest, because their family is part of the 99%. And I imagine Korra will be sympathetic to their cause, even though, as the Avatar, her job description is more about keeping spirit shit in check than getting involved in class warfare in a city she’s not even from. Not that she was a huge fan of keeping her nose out of political affairs last season. I’m excited to see where this goes.

Zuko’s flown (ON HIS DRAGON. Is the dragon’s name “Honor”? Don’t answer–I have decided that it is.) to the Northern Water Tribe. There, he meets Eska and Desna, who are in charge now that their dad went all evil and tried to cover the world in 10,000 years of darkness. I didn’t realize how much I missed Eska and Desna, though it’s only been two episodes without them. I guess I just figured that we were leaving their plotline behind and they wouldn’t show up anymore. Anyway, the two of them are very affronted that their kingdom has secret prison that they didn’t know about; Desna would really like to throw his tailor in there.

Zuko, Eska, Desna, and Tonraq go to the prison, where its sole inhabitant, P’li, is kept at freezing temperatures so she can’t firebend. Specifically, P’li’s brand of firebending is that she can create explosions with her head, LIKE SOMEONE ELSE WE KNOW.

Man, if this season is a “This is your life!”-style nostalgia trip through Avatar, I will be completely OK with that.

Nothing in this episode can compare to Zuko and Eska bonding over those times they each tried to kill the Avatar, though. NOTHING. 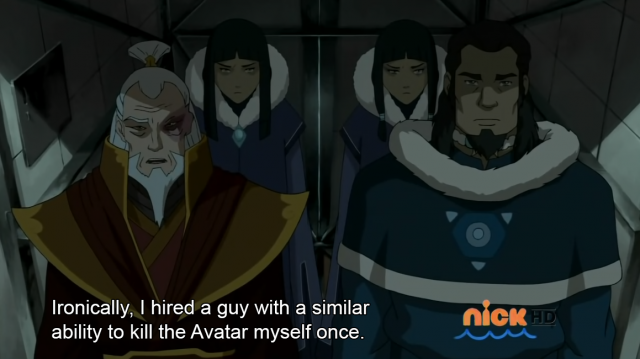 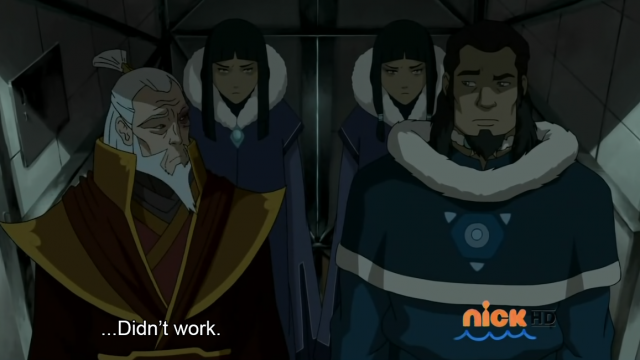 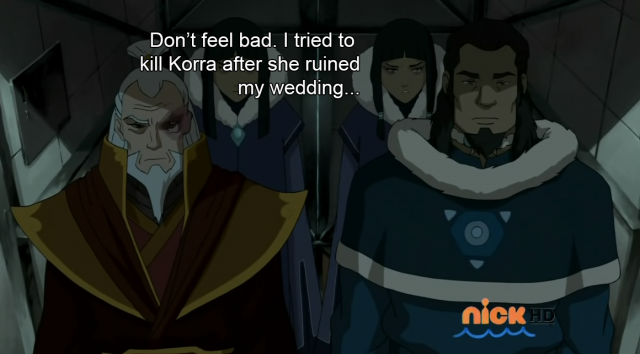 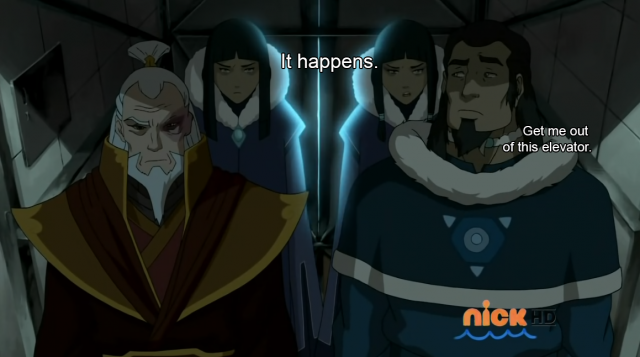 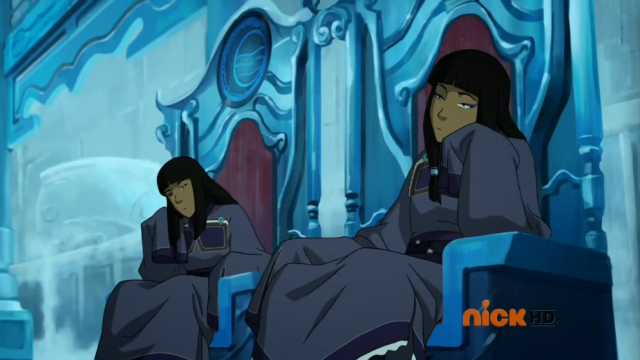