The Legend of Korra Newbie Recap: “Enemy at the Gates” 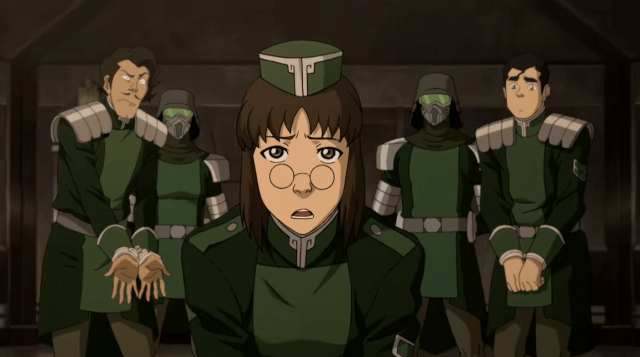 No, not this one: 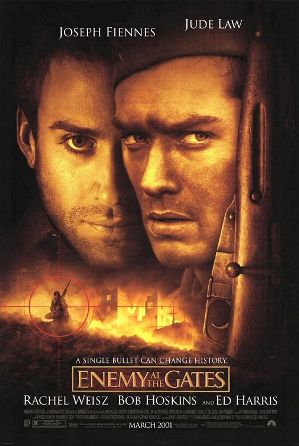 After a couple of set up-py sort of episodes, it looks like we’re about to start swinging into high gear, with Kuvira and her JAEGER ARMY on the verge of doing one of those hostile takeover things against Zhao Fu, the last remaining Earth Kingdom holdout. BUT WAIT. Kuvira at least wants to pretend, for the sake of good PR, that she’s not an evil dictator, so she sends Bolin to try and convince Su to surrender.

Bless the heart (in the Southern way) of Bataar Jr., who keeps trying to be as badass as his fiancee but can never quiiiite pull it off. He does macrame in his spare time. It’s a thing I’ve decided. Also, his face cycles through emojis real quick. 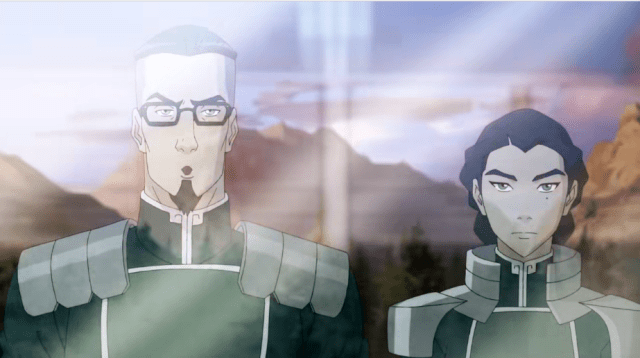 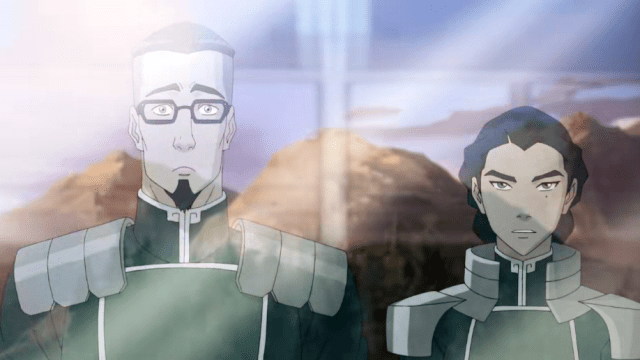 Bolin the golden retriever puppy is super excited that he’s so high-up in Kuvira’s organization that he’s invited to do diplomacy. Except, one thing: “Tell me, Kuvira, if our intentions are peaceful, do the troops massing outside Zhao Fu’s gates send the wrong message or…?” “NAAAAAHHHHHH. Don’t worry your pretty little head about it.” Kuvira just kind of powers through and expects everyone to fall into line behind her. I’m enjoying the reversal of typical gender norms and am very much looking forward to Korra kicking her ass.

Speaking of Korra, the Avatar informs Meelo, Ikki, and Jinora that, instead of going back to Republic City, she’ll make a pit stop at Zhao Fu to pull a “Surprise, bitch. I bet you thought you saw the last of me” on Kuvira. Except really, she’ll try to convince her to maybe not invade Zhao Fu. Using her words. And Kuvira will be like: 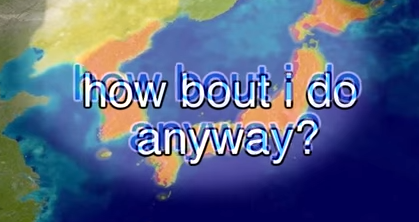 Meelo asks what even the gosh damned point is if Korra’s not beating someone up. I say to Meelo: WAIT. Korra is constitutionally incapable of going more than two episodes without punching someone. She’s due. It’ll happen.

At this point, both Bolin and Varrick have their “HOLY SHIT NO KUVIRA’S EARTH KINGDOM HITLER SHIT SHIT SHIT” moments. For Bolin, that comes after he and Kuvira visit Su and the rest of her family. Bolin tries the kumbayah “can’t we all just get along?” tack, while Kuvira argues that the towns she’s been through have all sorts of amenities sure, and sure there’s technically slave labor and dissenters are forced into prison camps, but omelettes, eggs, etc.. That’s called COLONIZATION, Kuvira! The thing where Su and Opal, whom Bolin trusts, think Kuvira is an evil dictator is clearly staring to worry Bolin a bit, and Kuvira saying that Zhao Fu has 24 hours to surrender before she invades doesn’t help. Later, Bolin asks Kuvira, “Heyyyy … we don’t actually have slave labor, do we?” Kuvira goes full SCARY MODE and threatens to send Bolin to a reeudcation camp, which—as it happens—is not a place where people go to take affordable vo-tech courses, like Bolin thought.

Varrick’s big moment comes after a mad scientist experiment on one of those spirit vines goes FUBAR. Turns out the vines are filled with energy, but it’s way more than he anticipated, and it causes an explosion that almost gets Zhu Li killed. (My favorite Zhu Li line, when Varrick’s trying to pull her back onto the moving train: “I think you’re just weak, sir!”) Varrick, who’s developing one of those conscience things (“Recently I’ve been having strange feelings … inside.” Honey, are you sure that’s not IBS?), tells Kuvira that he doesn’t want to continue the experiments, because what if the superweapon he’s building falls into the wrong hands? Kuvira tells him fuck your conscience, you’re building me my tree A-bomb anyway.

We also get a flashback in this episode to How Kuvira Got Evil, but it doesn’t tell us a ton that’s new: Su doesn’t want to conquer and Kuvira does. Kuvira’s desire to rule the Earth Kingdom genuinely does, or at least did, come from a place of wanting to share their progress with the rest of the country. We do find out that Su raised Kuvira practically as her own daughter. Another interlude in this week’s episode: Back in Republic City, Asami goes to visit her dad in prison and decides that she’ll try to reconcile with him. Oh … kay? I’m not sure what the point is, but it’s nice that the showrunners realized they should give Asami something to do.

Korra arrives in Zhao Fu, where she’s asked by Su whether she’d mind so very much slipping into the Avatar state and busting some fucking Earth Kingdom Jaeger army skulls. Actually, Korra responds, I’m kind of a peacenik now!

The meeting between Korra and Kuvira … doesn’t go so well. JUST GO AHEAD AND SHOOT ME IN MY FACE, but Kuvira honest-to-God manages to convince Korra that, hey, she’s not all bad. Honestly, it’s all just a big misunderstanding. You go back and talk to Su, and I promise I won’t invade any cities until you get back.

NO, KORRA. NOT LEGIT.

THIS IS WHY VIOLENCE SHOULD ALWAYS BE YOUR FIRST RESORT.

Later, Bolin scurries through the ceiling vents so he can tell Varrick that Kuvira’s evil, which by that point Varrick’s already figured out for himslef. I love that Bolin took the time to give Varrick a heads-up. Sure, Varrick tried to kidnap the president that one time, but they’re still buds! The two of them, plus Zhu Li, make their daring escape but are quickly captured by Bataar Jr. The whole thing swiftly escalates into a Jaeger fight. Varrick’s hopeless, but Zhu Li and Bolin kick ass … until Bataar captures Varrick and demands that the other two turn themselves in.

Kuvira orders that Varrick be locked back up in his lab to work on the spirit bomb, while Bolin’s to be sent to re-education camp. Zhu Li’s consigned to a camp, too, until she throws Varrick under the bus hardcore, telling her now-ex boss that he’s a grade A asshole who never appreciated everything she did for him. Kuvira’s the real genius, so can’t Zhu Li serve her instead, oh please? I don’t know which option I like better: Zhu Li snapping after years of Varrick treating her like a slave, or Zhu Li pretending to switch sides so she’ll be able to help Varrick later. Wait, Zhu Li thinks. Kuvira is a self-involved tool with a superiority complex. I KNOW THIS. 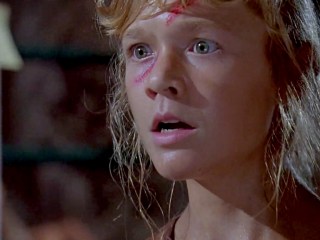 I suspect we’re looking at the latter situation, but honestly, either one works. Zhu Li is slowly becoming one of my low-key favorites.

The episode ends with Korra finding out that Su’s twin sons are planning to sneak into Kuvira’s camp that very night and “put an end to this.” Wait. Is that Nickelodeon code for a political assassination? Pictured, Thing One and Thing Two: 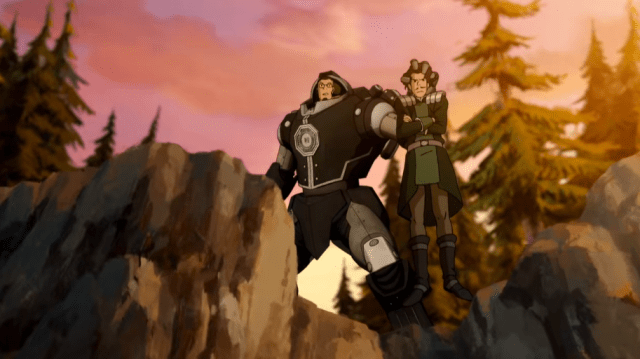