The Legend of Korra Newbie Recap S2E13 | The Mary Sue 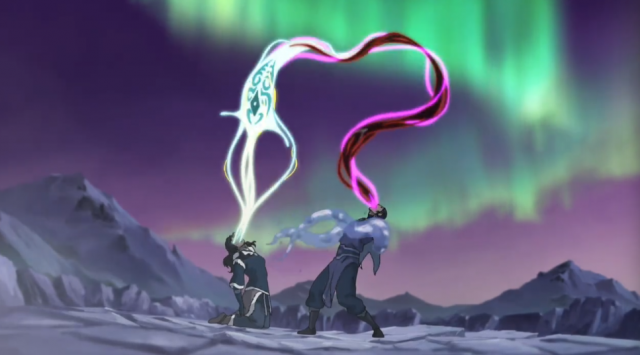 This episode has: a lot of fighting, villain monologues, and a very special guest appearance from Jason Isaacs!

Now that Vaatu’s broken out of his tree prison, his next step is to merge with Unalaq into the “Dark Avatar,” something Korra (for the moment) stops by airbending Unalaq’s ass out of the spirit world. 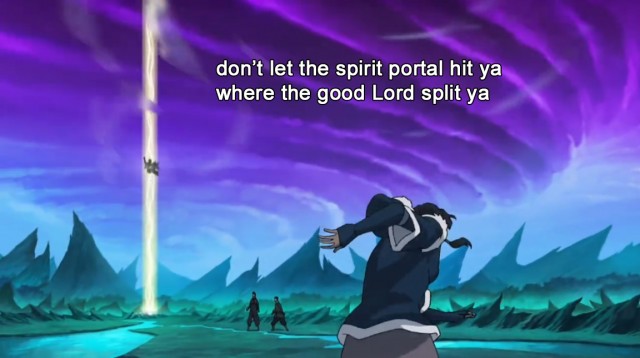 She then orders Mako and Bolin back into the human world to keep Unalaq from coming back through the portal. There are a lot of people switching from one world to another in this episode. I’m not going to go into each individual instance. It’s too much like a Benny Hill sequence.

Mako and Bolin manage to defend themselves against Unalaq, but then Eska and Desna show up and take them out in like two seconds. Unalaq goes back into the spirit world, stopping Korra just as she’s about to trap Vaatu in his tree and bring the season to a slightly early end.

Meanwhile, in another part of the spirit world, Tenzin, Kya, and Bumi are less than successfully attempting to locate Jinora. All three of them have a plan—Tenzin’s asking a spirit for help, Kya’s meditating, and Bumi’s tracking—that falls short, and they get hopelessly lost. Sounds like they need Iroh! 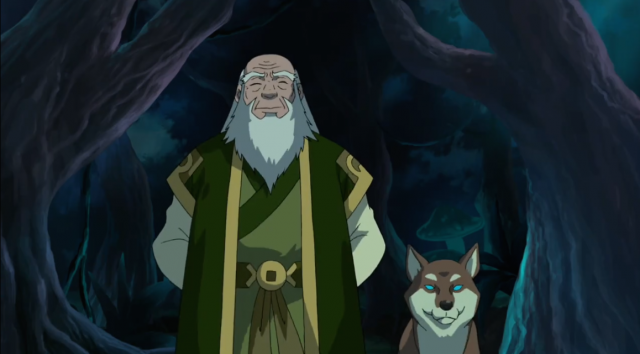 After a brounion between Iroh and Tenzin, Iroh warns the siblings that they’d better GTFO of the spirit world, because if they stay there too long they’ll “end up in a place where only the lost will ever find you.” It’s the sort of cryptic, semi-useless advice that’s Iroh’s trademark; Tenzin is only able to make any sense of it because he’s a nerd with an Iroh-to-English dictionary. He connects the dots between “place where only the lost will ever find you” and the Fog of Lost Souls, which, as the Alcatraz of the spirit world, is where Jionra must be. Iroh would be the worst GPS ever. “Let your spirit tell you which way the road must take you!” “Dammit, Iroh, I just want to get to Sonic!”

To get to the Fog of Lost Souls—a canyon filled with a giant, sentient fog that makes you relive your worst memories until you’ve gone insane—the three visit the unhelpful spirit from before, a big-ass scorpion, who attacks them and throws them into the Fog. There, they meet none other than the ATLAverse’s least effective supervillain, the one person even less competent than season one Zuko… Commander Zhao!

Ohhhh, Zhao. I can’t say I missed you, but I’m glad you’re still wandering around being a useless dipshit with all the emotional maturity of a 12-year-old.

Korra’s ass gets kicked and Eska and Desna trap Mako and Bolin in ice, leaving Unalaq open to fuse with Vaatu and become the Dark Avatar. Eska and Desna actually see their father go evil Super Saiyan, which is a little disturbing. Unalaq engages in some spirit mojo and and melds the two words before announcing his intention to rule as the New Avatar. Korra’s like uh, no but almost gets crushed to death (damn, Nickelodeon) before a pep talk from Raava gets her back on track.

Meanwhile, Mako and Bumi try to convince Eska and Desna to let them go. Mako tries logic—the whole “Hey did you hear that your dad’s evil now?” thing—while Mako goes full pathos, blubbering about how he’s always loved Eska and if the world ends he’ll never get to be with her and he’s SO SORRY, WAAAAAAAAH. 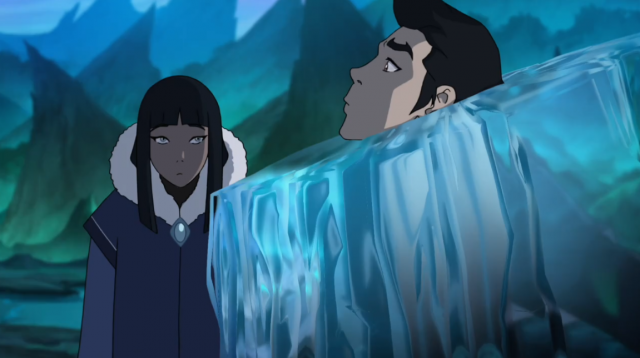 Same, dudes. I want more interaction between these two. I think it would be fun.

Eska, her icy reserve melted, lets Mako and Bolin go, with the caveat that they’ll probably die anyway, so whatever. Mako compliments Bolin on fooling Eska with his acting, to which he replies: “Yeah, right… that was acting!” Awwwww. Bolin, you muffin!

A waterbender-on-waterbender fight between Korra and Unalaq leads to the latter plucking Raava out of Korra’s body… leaving Korra a normal, non-Avatar person, I guess? Whoops, Unalaq won. Mako and Bolin attack Unalaq but get their butts roundly kicked, after which Unalaq does… something… that leads to Korra’s past incarnations going splodey. He the destroys Raava as well, leaving her to dissipate in a cloud of gold. We do have two seasons left, though, so something tells me she’ll be back, eventually.

Back in the Fog of Lost Souls, Kya, Bumi and Tenzin are separated and begin to go insane. The memory Bumi is plagued with is of the time he apparently had an encounter with cannibals, LOLOL.

Tenzin’s trip to crazytown brings him some angst about not living up to his father’s memory—because what’s an ATLAverse episode without daddy issues?—but he eventually has a big revelatory moment where he tells the Fog (which has taken the form of Aang) that he’s his own man and not a reflection of his father. The Fog dissipates long enough for him to find Kya, Bumi, and Jinora, and all four of them head back to the portal.

But before they get there, Jinora informs her father that she’s glad he rescued her and all, but there are some serious spiritual shenanigans happening that she has to deal with. She’ll be back before curfew, maybe? 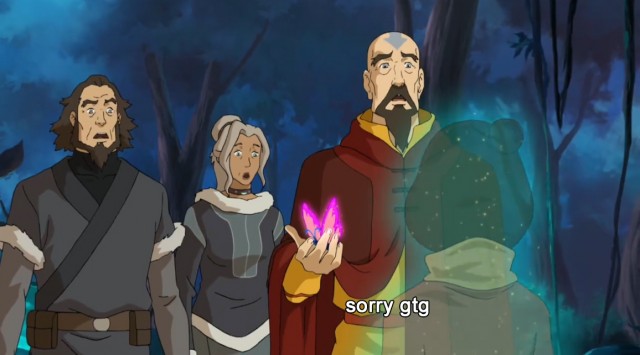 Jinora’s going to have her hands full saving the day: The episode ends with the 10,000 years of darkness beginning and Unalaq going full-on freaky mode as his kids, plus Korra, Mako, and Bolin, look on in horror. 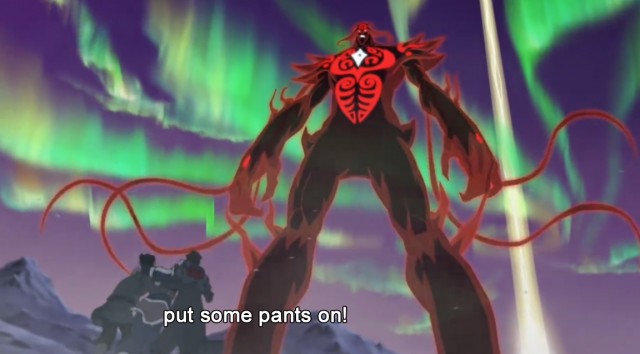 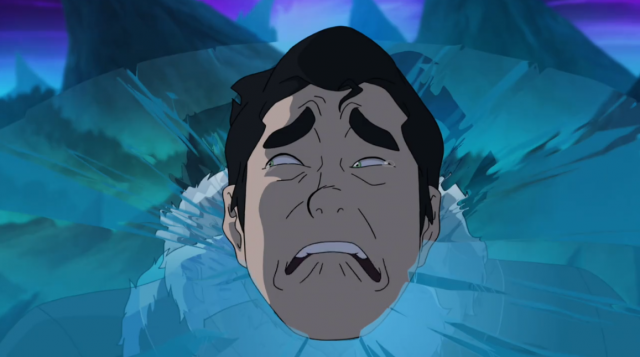