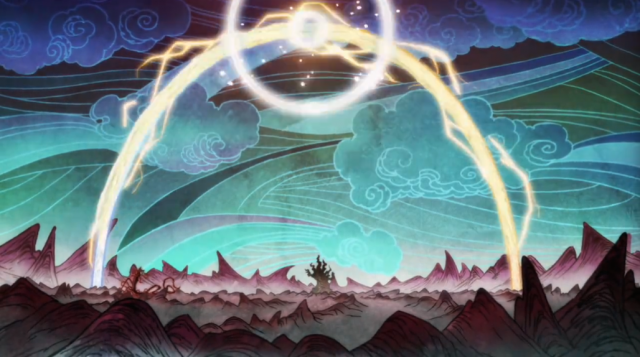 After an episode of set-up, “Beginnings, Part 2” gives us the meat of the Avatar’s origin story. Let’s get right to it!

Raava continues to harsh Wan’s buzz for accidentally meddling in the affairs of the spirits and releasing the physical embodiment of chaos and darkness into the world. As if we all haven’t done that at one point or another. Lighten up, Raava. Wan offers to help track down Vaatu, but Raava tells him no thanks, someone’s helped out enough already.

Instead, Wan goes off on his cougar deer and eventually comes across a group of Air Nomads, the first humans from outside his city he’s ever seen. He follows them back to their turtle city, where he finds them living peacefully with the spirits, because Air Nomads are all giant hippies. But the spirits, influenced by Vaatu’s energy, turn evil and start attacking the villagers. Vaatu shows up as well, prompting the head monk to ask why he’s here without Raava. 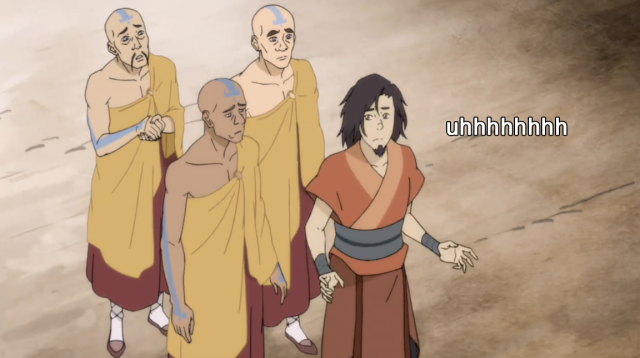 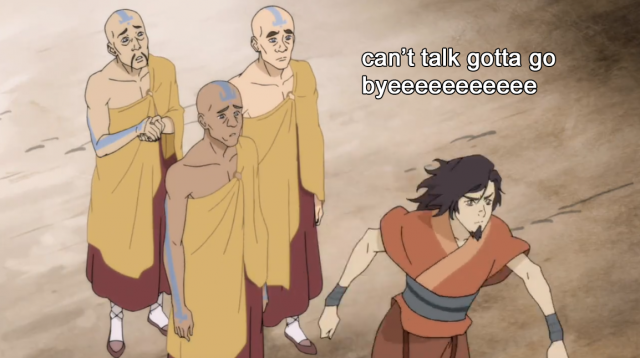 Wan has a middling time of things fighting the dark spirits and Vaatu, who is eventually chased away by the Raava. Before Vaatu goes, he mentions the “Harmonic Convergence,” which sounds like some particularly impressive bluegrass technique but is actually (we later learn) the time once ever 10,000 years when the planets align, the Northern and Southern Spirit Portals do a thing (see top pic), and Vaatu and Raavu have to fight for the fate of the Earth. If one lives, the other will grow inside them and eventually come back—but, if Vaatu’s the victor, that still gives him a heck of a long time to cause mischief of the world-ending variety before Raava will be able to make her reappearance. Even worse, the Harmonic Convergence is going to take place in only a few weeks. With Vaatu free, he’s getting larger and stronger and, as a result, Raava is getting smaller and weaker. With each passing day it becomes less and less likely that the power of good could possibly triumph over evil.

Waaaaaitaminute. Hold up, says the head Air Nomad. How in the hell did all this happen, again? Wan makes a :/ face as Raava stands by looking as judgmental as a giant kite can look. 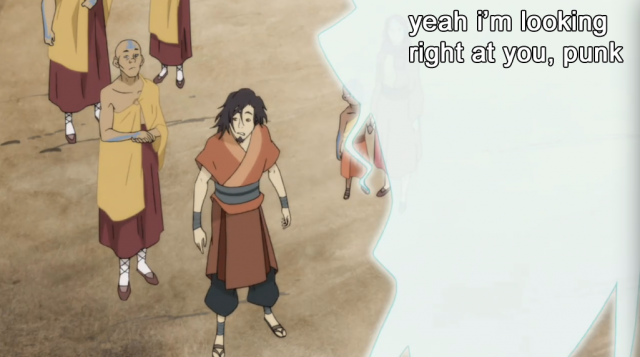 Determined to help bring Vaatu to heel after his own epic screw-up, Wan goes to the Air Nomad’s giant turtle friend and asks for the power of airbending. The turtle originally says fuck no, because a human’s never had two powers at once, but Raava agrees to hold the power for him until he’s ready to harness it. Then they move on to water and earth, mirroring the order of the eventual Avatar cycle.

Eventually, with the help of Raava (but without an “Eye of the Tiger” training montage, WTF Korra), Wan masters all four elements. The two of them come across his old BFF and his band of merry arsonists, who are locked in a deadly war against Wan’s spirit buddies, each side determined to hate and fear the other. Wan, adopting a “Can’t we all just get along?” stance, tries to get both sides to calm the fuck down, but to no avail: Vaatu, drawn by the spirits’ anger, comes along and turns ’em dark. Wan and Raava try to pull a Captain Planet, combining their powers to stop the fighting, but—as we learned last episode—a spirit can only possess a human for a few seconds before killing them. Wan passes out and is spirited away by Raava, whose own powers have been severely drained: Now she’s less like kite than a tiny little squid.

The two of them skedaddle to the South Pole and pass through the portal into the spirit realm, because one cannot really be “fashionably late” to the Harmonic Convergence. It’d be so awkward. Raava admits that she was wrong about humans, and that they can be noble and courageous . Wan goes full Gryffindor and tells Vaatu that if he, the crazy evil spirit, wants to fight Raava, he’ll have to go through Wan first, punk!

Wan gets his ass thoroughly kicked until he and Raava join forces, after which he only gets his ass moderately kicked. Raava’s weak anyway and them being in one body seriously fucks with Wan after a while, though he refuses to separate until they get the job done. The planets align and the Harmonic Convergence starts, and it looks like Vaatu’s winning until Raava puts his hand into the portal … arc … thingy and goes full Avatar State. 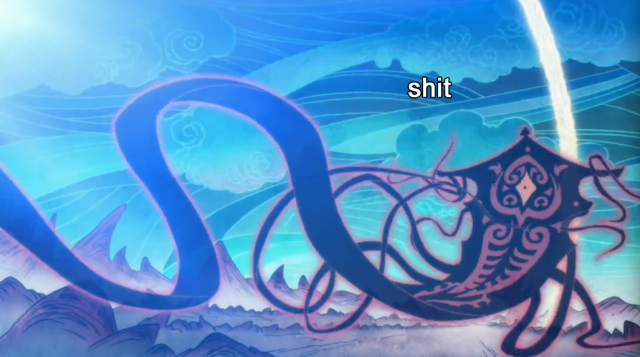 Wan traps Vaatu, first in an atomic-looking construction made of all four elements (we saw it before in the Avatar finale), then in a conveniently located tree in the spirit realm. Wan then closes both portals linking the spirit and human realms—which, we learned earlier, were originally opened by Vaatu—so that no one can ever get through and free him.

SO WHO CAUSED THE OPENING OF THE PORTALS, THEN, IF IT’S SO BAD?

“WAAAAAAAAAHHHHHH, OUR CHI IS BLOCKED, WE HAVE TO OPEN THE PORTALS AND BE SPIRITUALLY FREE, WAAAAAAAAAAAAAH.”

Before closing both portals, Wan ushers all the spirits—who “drifted” through the portals into the human realm originally—back through, promising them that he’ll be the bridge between the two worlds, ushering in an age of peace and ensuring that no humans disrespect the spirits.

How’d that work out for you, Wan? 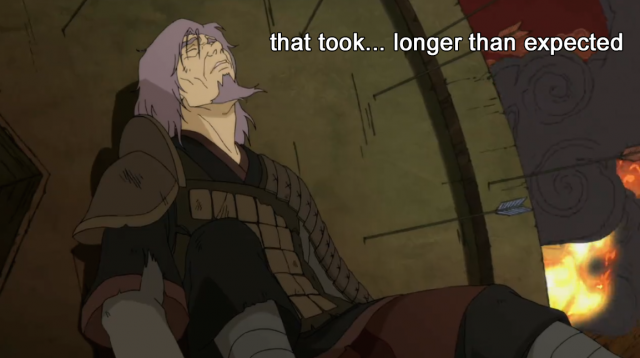 An old man on the verge of death in the midst of a fiery warscape hellzone, Wan realizes that world peace is perhaps an unachievable goal for one person in one lifetime. Good thing you’re possessed by a gigantic spiritual kite, bro! Raava tells Wan that “we’ll be together for all your lifetimes” and, on his death, peaces out into the ether to be reincarnated in the next Avatar.

Back in the present day, Korra wakes up, sans amnesia, and is told by the shaman that, by the by, Harmonic Convergence is only a few weeks away. 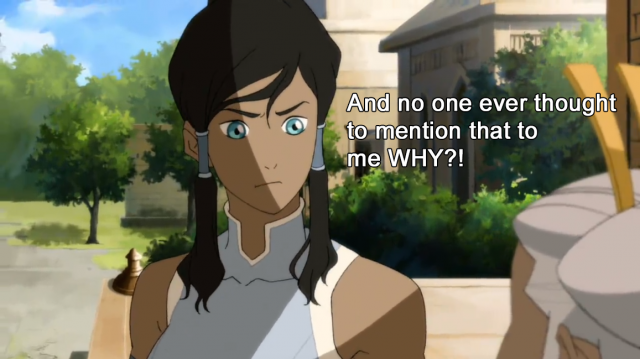 Seriously. Kind of in her job description. I mean, sure, in theory Vaatu’s all locked up and can’t cause any mischief, but … maybe just a heads-up? “Hey, this giant battle between good and evil is supposed to happen on your watch, probably won’t be an issue but JUST IN CASE.”

Or “Here’s the story of where your powers came from—its moral is NEVER OPEN ONE OF THE SPIRIT PORTALS, NEVER EVER.”

And anyway, now that the Southern Portal has been opened—by Korra herself, no less—it is a big issue, so Korra zooms off on a sky bison (Awww! Memories.) to stop Vaatu from busting out (helped by someone who’s definitely  not evil, nosiree) before it’s too late. 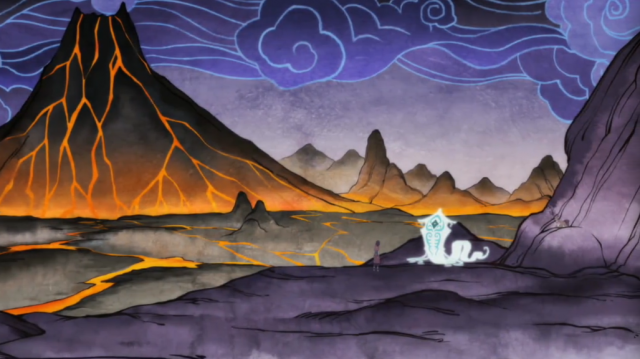 Man, the normal art style’s going to look so boring after this episode.