Fanart Revisits How Many Avengers We've Lost | The Mary Sue

Beautifully Tragic Fanart Reminds Us How Many Avengers We’ve Lost

Been meaning to take the remaining avengers back to the Shawarma joint. Here is the update with who’s left, tho I don’t know if Wong is alive 😅 but honestly it’s sad how many left us. Now to see how many will return… #avengers4 @Russo_Brothers @RobertDowneyJr pic.twitter.com/uzdnuP8VQz

The talented artist who goes by Bosslogic updated their popular “Last Shawarma” artwork to reflect how many Avengers and Marvel heroes were lost to Thanos’ Snap. It’s … a lot. 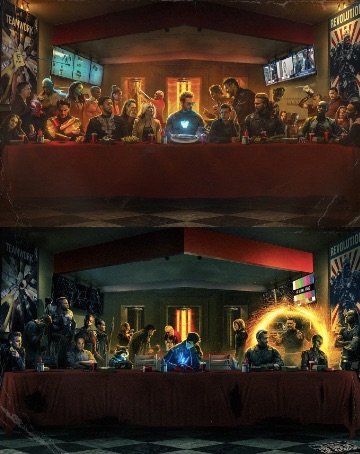 Bosslogic’s work is so striking that he counts the Russo brothers among his fans and over 100,000 followers on Twitter. His work “The Last Shawarma” managed to fit in the entire massive cast of Infinity War, with wonderful details playing off the da Vinci’s “Last Supper.” In revisiting the tableau, Bosslogic shows just how drastically the cast of “living” characters has been reduced.

Before and after the #snap #thelastshawarma with some zoomed shots as requested – #avengers4 @Russo_Brothers @RobertDowneyJr pic.twitter.com/3wowDMNa4B

It’s rather stark (sorry) seeing them set up like this. Unlike the first picture, where everyone’s just kind of hanging out, here the survivors are arrayed in grieving poses:

Thor bent over with his blanket while Stan Lee offers him a drink from a flask, Scott Lang with his arms crossed and his expression bereft, Okoye with her eyes closed, flanked by M’Baku and Shuri, Bruce Banner with his head bowed, Rocket clutching what looks like Groot’s electronic game, Rhodey with crossed arms looking caught mid-sigh, Wong (who better be alive!) coming in via Sling Ring portal from the damaged Sanctum, Natasha Romanoff just kind of blankly staring, Nebula gazing sadly at nothing, Steve Rogers looking frankly defeated, and Tony Stark with his head in his hands. A Clint in Ronin mode has joined the scene, and in the corner, Carol Danvers can be glimpsed facing the window (and having a soda).

The lights are off in the Shawarma joint, one of the TVs shows the color bar test pattern with “no signal found,” and the other TVs appear to be broken. (Smashed by someone angry or upset at the news? Can the world of Avengers 4 have any good news anymore?)

As always with Bosslogic’s work, the more you look, the more awesome and impressive details you’ll discover. I only just now saw that it looks like Peter Parker’s school backpack is on the seat next to Tony, where he was sitting in the first picture, and that Shuri is wearing the Black Panther necklace/mantle (along with a really cool leather jacket).

You should consider grabbing some of Bosslogic’s prints, because they look amazing on a wall, and he also has a line of t-shirts. I never knew how much I needed a Korg of Krona “Revolution” poster like the one depicted in the Shawarma joint, but oh, I do. You can get a Korg of your own here. I’m ready to join up. 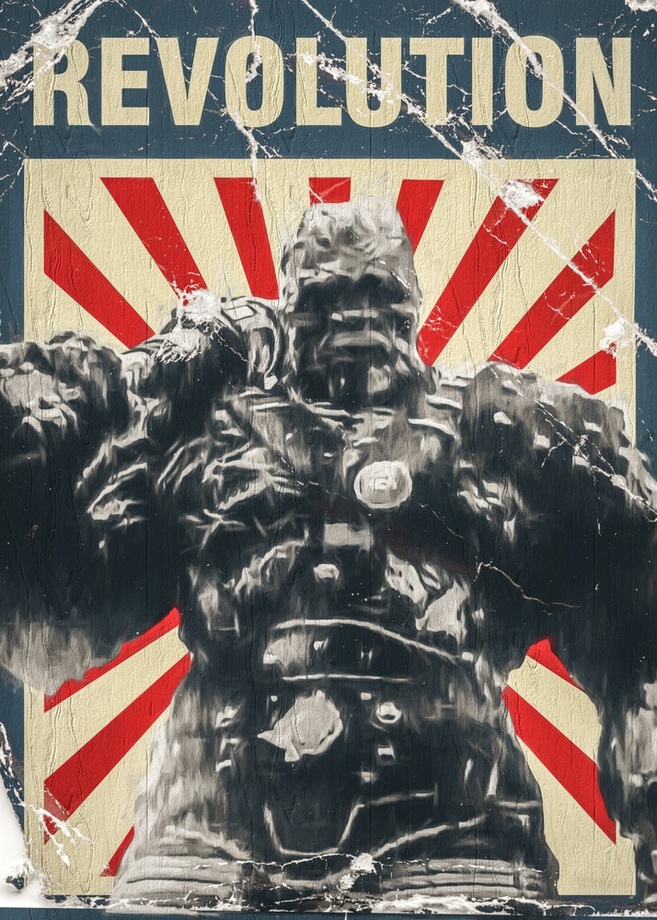 Did you spot any details here that I missed? Tell me in the comments!