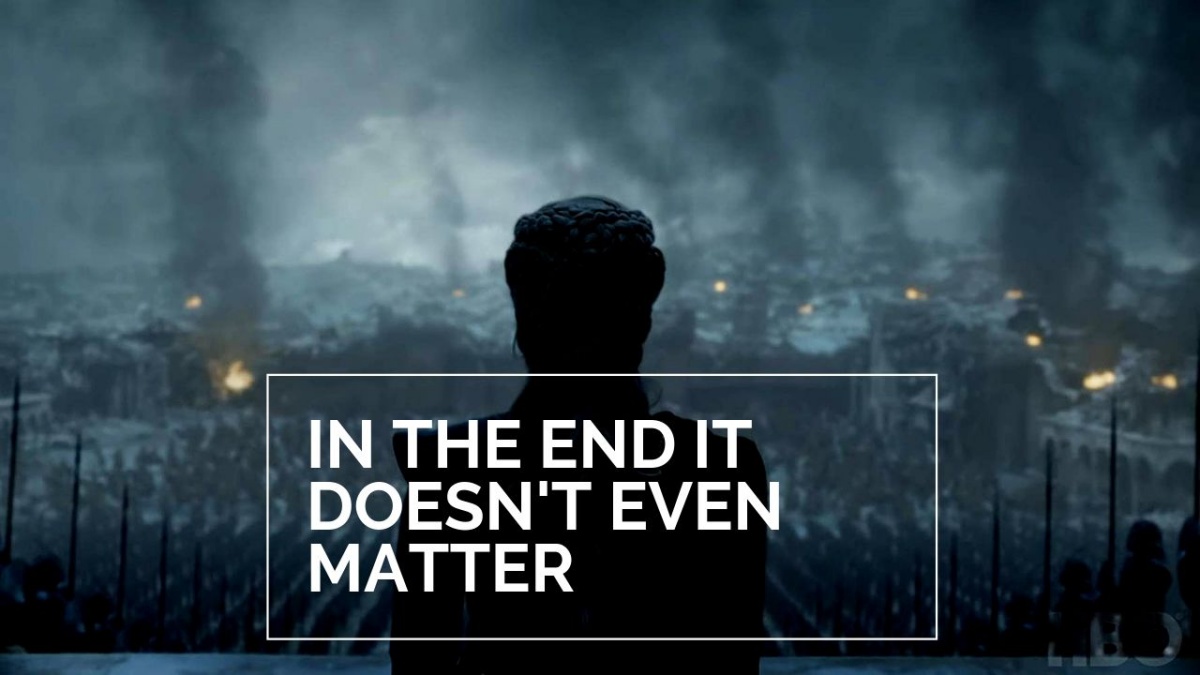 After almost a decade, the HBO series Game of Thrones has finally ended. No matter what we may think of the finale, it’s the end of an era of television that has been incredible. That being said, let’s talk about this Game of Thrones series finale. All the spoilers ahead.

In the finale episode of Game of Thrones, Daenerys Targaryen is put down like a dog with rabies by her former lover and cousin, Jon Snow, after they embrace. Jon spoke with Tyrion earlier and told the man it was the right thing to do because Dany had convinced herself that it was her destiny to rage war on everyone else in order to break the wheel.

The scene between Tyrion and Jon is somewhat interesting because the show does finally, in some way, acknowledge that Dany’s previous murderous actions against “evil men” (evil brown men) in Essos were not presented as something that could be challenged, but now that has all gone to her head.

That would be an interesting storyline if the show had ever really dealt with those aspects of Dany and spent the season having her act cruelly, instead of having her advisors be incompetent and lead her more and more into a decline. Dany dies without saying anything. It’s quick and unceremonious for someone who could be considered one of the main characters of the series.

The Iron Throne is now occupied by Bran Stark, who is really the Three-Eyed Raven with a council of men beside him, plus Brienne. Great. Who gets to rule besides Brienne and Bran (who we don’t even get to see do anything, as he gets wheeled in and out within five minutes)? Bronn, who is going to turn Highgarden, one of the few seats of onscreen female leadership, into his own personal brothel, is now Master of Coin. Tyrion, who spent the entire last two-and-a-half seasons being functionally useless, is hand of the king. There’s also Davos, who we love but has failed to be anything more than a great hype man and daddy type, and Sam, who reads.

Thankfully, there was one silver living: Sansa got to be Queen in the North!

Sansa Hive, we did it, but we will talk about that at a later time.

Entertainment Weekly has spoken to Emilia Clarke about this episode already, and it’s clear she’s emotional about it. Game of Thrones and Dany have taken up her 20s and made her a household name. She really brought it in this final season, and regardless of how I feel about her character’s turn, I do think Clarke brought Dany to life in a way few actors get to fully embody a role.

She recalled her reaction to the script: “What, what, what, WHAT!? Because it comes out of f—king nowhere. I’m flabbergasted. Absolutely never saw that coming.”

Kit Harington, who plays Jon Snow, told EW that he feared the final two episodes would be accused of being sexist and delivered his own justification for it:

“One of my worries with this is we have Cersei and Dany, two leading women, who fall. The justification is: Just because they’re women, why should they be the goodies? They’re the most interesting characters in the show. And that’s what Thrones has always done. You can’t just say the strong women are going to end up the good people. Dany is not a good person. It’s going to open up discussion but there’s nothing done in this show that isn’t truthful to the characters. And when have you ever seen a woman play a dictator?”

No one has a problem with Dany not being a good person. The problem is the way it has been framed. It’s the hypocrisy of the same people who followed her when she was being brutal to other people, now being shook when she’s doing it in Westeros. It’s the fact that not enough time was given by the show itself to really display this side of Dany. In the books, there are many lines in which Dany herself talks about being a monster, none of which made it into the show.

Here’s one for example from book five, Dance of Dragons:

“Mother of dragons, Daenerys thought. Mother of monsters. What have I unleashed upon the world? A queen I am, but my throne is made of burned bones, and it rests on quicksand. Without dragons, how could she hope to hold Meereen, much less win back Westeros? I am the blood of the dragon, she thought. If they are monsters, so am I.”

Calling Game of Thrones‘ treatment of Dany sexist is not saying that she shouldn’t be allowed to be bad; it’s about the fact that the show propped her up as a good character for most of its run and then stripped that away at its narrative convenience with “bitches be crazy” tropes.

The writers didn’t have to reduce Dany and prop up Jon by alluding to his temperament and male-ness. They could have shown concern about supporting her when she was burning people alive in Essos. They could have not promised House Tyrell and Dorne “fire and blood” when bringing them over to Team Dany. It’s a subject multiple critics have addressed, and for me, the problem isn’t that she’s “mad” (also, what is her mental illness, then, guys?); it’s that they rushed it in a messy way that sold the character short.

We got Sansa as queen, but both Dany and Cersei died, plus now there is a Prince of Dorne, which fully completes the erasure of Arianne Martell, one of the female heirs we had. What’s worse is that both Dany and Cersei were partly the way they were because of the cruel circumstances in which they were raised. Neither Dany or Cersei had loving warm home lives. Both were abused, raped, used, and made to feel lesser as women. Cersei responded by internalizing that sexism and spitting it back onto other women living for self-preservation until it killed her. Dany wanted to be a hero, a savior, and a good person but was slowly hardened by the thing she felt she needed to do to keep power.

Sansa was abused, but Sansa spent the majority of her life in a household filled with love and nobility. Those things anchored her. Dany and Cersei had no anchors. It would have been nice to see those layers acknowledged in the end. If we are going to praise shows like Thrones for being “realistic” about brutality, it should also be fair to criticize the portrayal of how that brutality affects people not able to grow up in the lap of luxury. Even Tyrion had one sibling who looked out for him: Dany’s brother sexually violated her.

Dany’s end saddens me, even though I didn’t love the character, because this means that the only two Queens of Westeros to have ruled were both crazy women who had to be put down, and they were replaced by a rational man who wanted for nothing, who elected a small council of mostly men to rule. Great. Glad to know that this is breaking the wheel …

Still, we got some good scenes, and Drogon outacted everyone, and once again … Sansa is the Queen in the North, so all the haters can … seethe.

More than anything, this finale was just boring—a disappointing end to a show that had so much promise and a cast of characters that were more nuanced than it knew what to do with in the end. Beautiful gifs out of it, though.

What were your thoughts on the series finale?