Review: The Kitchen Examines the Marginalization of Women, but It’s Far From Perfect 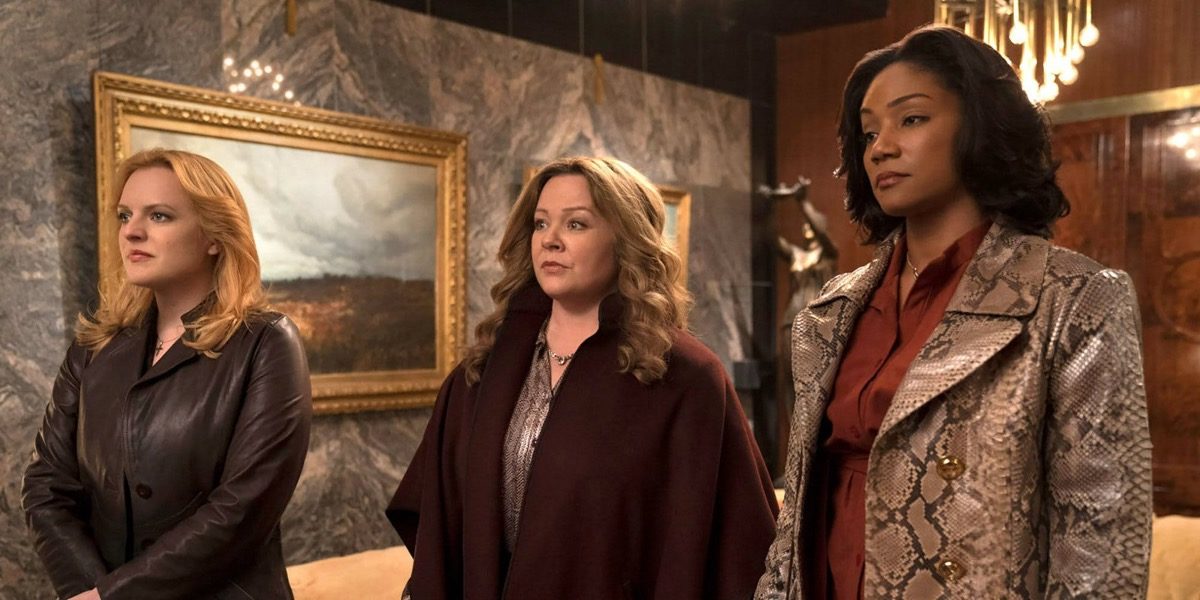 The Kitchen opens with the vocals of Etta James singing “It’s A Man’s Man’s Man’s World,” but it’s a woman’s world in writer-director Andrea Berloff’s directorial debut, as she crafts a narrative that makes the legendary song erroneous, her A-list cast of women becoming the most powerful and feared mobsters in Hell’s Kitchen.

Based on the graphic novel of the same name by Ollie Masters and Ming Doyle, The Kitchen brings the infamous New York City neighborhood back to hell—a hell run by the Irish mob, where its streets are littered with crime, drugs, and prostitution. Hell’s Kitchen is controlled by a tight-knit group of egotistical men, led by Kevin (James Badge Dale), Jimmy (Brian d’Arcy James), and Rob (Jeremy Bobb). All three are married to wives who must depend on them for everything.

Kathy (Melissa McCarthy) is the housewife of the group, having to stay home and raise her two young kids while her husband, Jimmy, goes out and does mob stuff; Ruby (Tiffany Haddish), being African-American, doesn’t fit into the Irish mob family, let alone the neighborhood, so Kevin is essentially a safety net for her; and Claire (Elisabeth Moss), well, she’s scared of Rob, who abuses her every chance he gets.

But when their husbands are arrested by the FBI and sent to prison, Kathy, Ruby and Claire are left to their own devices.

The Irish mob is a family business and one that is supposed to take care of them while their husbands are locked up, but Jackie (Myk Watford), who’s now in charge, gives the wives barely any money to scrape by on. We see the way the male members of the mob push them around and cast them aside, and through the wives’ conversations with one another, they address the unfairness of being made to feel that they have no place in the world without their husbands—the unfairness of being made to feel that their only purpose is to have babies—and if they don’t have either, they are treated as inhuman.

We see how they are unable to find employment, as a result of not being allowed the education or other opportunities that would help them develop any skills. So, they must turn to the only thing they know: crime. Kathy, Ruby and Claire become the head of the family—no longer just the wives of mobsters, but the mobsters.

Through this mob tale, Berloff crafts a film that examines the marginalization of women in a bloody way, and while times certainly have changed, women are still treated as lesser and insignificant in society in the real world. Women still face inequality in the workplace and are still being harassed wherever they stand, but women are able to take control of their own agency now more than ever before, which is emphasized in The Kitchen as Kathy, Ruby, and Claire show the male mobsters that they are their equal and even more capable of running the business. In one poignant scene, Kathy explains, with tears in her eyes, how afraid she used to feel walking the street alone at night. (How relevant this feeling remains), but now, she owns the streets.

While The Kitchen establishes all the relevant messages, it’s not without conflict, as these women get in a little over their heads. The film explores just how this life almost destroys these women, as their rise to power turns ever more violent. It shows how this rise hardens them and almost destroys who they are—how sympathy, being “soft,” isn’t a negative trait, and how having it makes us all the more mighty.

The Kitchen is far from a perfect film, though. The narrative is a mess at times, with its choppy editing and a third act that’s too rushed to feel the proper impact of its big twist, and too incoherent in its exploration of character motivations, but the drama is there, with all the shocking and violent moments you can expect from a mob tale. With set pieces, stunning ’70s fashion, and a soundtrack that perfectly sets the mood for the wives’ takeover, the era comes alive again and makes you thankful that the Irish and Italian mobs are no longer running our cities (although violence still lingers).

The film’s strength lies in its powerhouse cast of ladies, whose character transformations are impactful. As Kathy, McCarthy goes from a doting wife to a viper who would do anything to protect her children and the people of Hell’s Kitchen. McCarthy taking another brilliant turn at the dramatic, but this is new territory for Haddish, who has quickly become Hollywood’s reigning comedy queen. As Ruby, we see an ambitious woman who won’t let the color of her skin define what she can and can not achieve. And while she is the most hard-boiled of the three, Haddish still can’t escape her natural comedic essence and manages to get some laughs even while delivering the most serious lines. Moss delivers the most startling performance of the three, as Claire goes from a woman too scared to stand up for herself to one who isn’t afraid to kill a man.

Eventually, the husbands are released from jail, and Jimmy complains to Kathy that it’s unfair that he’s now, essentially, the housewife stuck in the kitchen while Kathy goes out and runs the business without him. Berloff makes you wonder how different life would be like today if the roles were reversed from the beginning. As the song says, it may be a man’s world, but without a woman or a girl, it’s no world at all.