The Internet Is Obsessed With This Salmon Cannon and Honestly How Could You Not Be?

Look at those fish go! 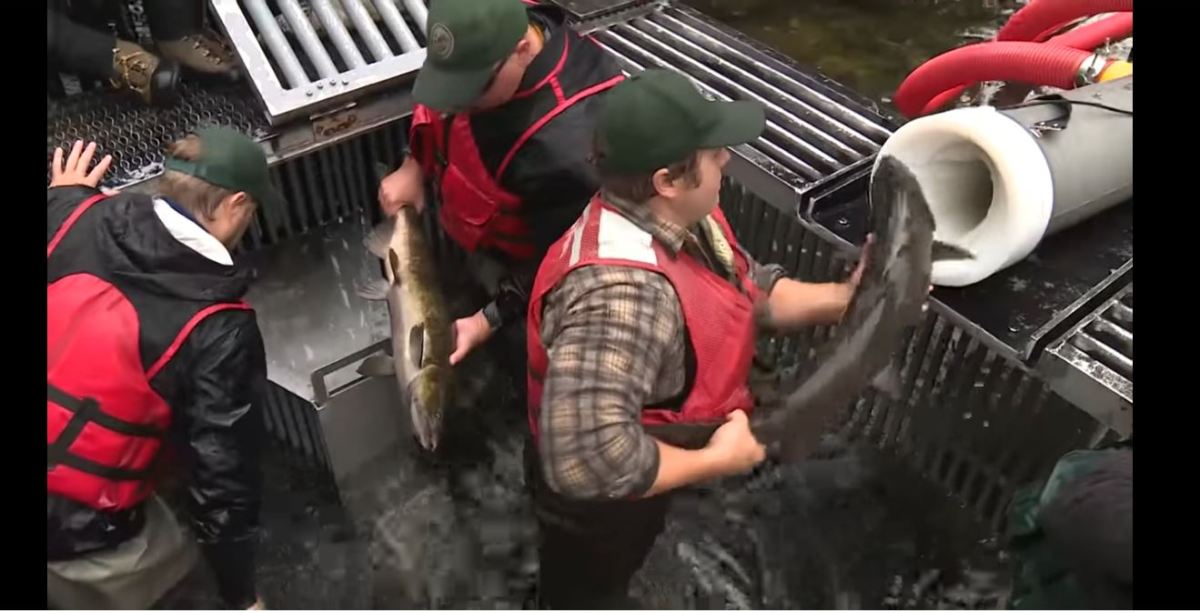 There is a mysterious alchemy to the formation of a social media trend. I’m not talking about current events or celebrity gossip or sports. I’m talking about those completely random moments than wiggle their way into our timeline and capture the world’s imagination. These bizarre cultural nuggets have a way of unifying the oft-divided internet around a collective feeling of WTF that inspires us to share them with everyone we know. Case in point: the salmon cannon.

This salmon cannon transports the fish between bodies of water. (Via @CheddarGadgets)https://t.co/2eFQceFgzv pic.twitter.com/AHK0QJMCKf

Now the salmon cannon is nothing new: Whooshh Innovations’ Fish Transport System has been around since 2011, when the company began to prototype an environmentally friendly system to safely transport live fish from one areas to another. The salmon cannon uses a flexible, pressurized tube which helps migratory fish reach new locations to spawn, a journey made increasingly difficult by hydro-electric dams.

While the technology is impressive, it is also undoubtedly hilarious, because come on, fish zooming through a tube is just plain funny. John Oliver thought so when he devoted a segment of his HBO series Last Week Tonight to the salmon cannon in 2014, enlisting a bevvy of special guests to test it.

But now, thanks to a viral tweet, the internet has fallen in love with the salmon cannon:

imagine if you were a fish and this shit happened to you https://t.co/SaYJ0leOm1

The future is coming. pic.twitter.com/VOM2AOflSU

Imagine a fish that doesnt go through that listening to the story of the fishes that Do. They probably think those fish are fucking insane 😂 pic.twitter.com/gfqMk6gggO

My housemate: so how was your day

Me: sorry can you just give me a moment [spends 15 minutes thinking how to try to explain salmon cannon, without sounding crazy, to a person who doesn’t have twitter]

The fish in the salmon cannon: pic.twitter.com/wz3ac6JMUC

Bears waiting for the #salmoncannon to shoot to their section pic.twitter.com/PerwzQrAFi

I just wanna be rich enough to travel everywhere by salmon cannon. pic.twitter.com/ngvcVVolo3

Therapist: and what do you do with your bad thoughts?

Put ‘em in the salmon tube!

reality appears to be breaking down. so i guess i'll just watch the video of the salmon cannonballing up the tube 100 more times

In these violent and troubled times, there is something weirdly soothing about watching these fish zoom through a pressurized slide like some sort of Dr. Seuss/Monty Python fever dream. Long live the salmon cannon and the irrepressible weirdness of the internet. Now if you’ll excuse me, I have watch this video 30 more times.