Connie, Sadie, and the Importance of Human Beings in Steven Universe | The Mary Sue

Connie, Sadie, and the Importance of Human Beings in Steven Universe 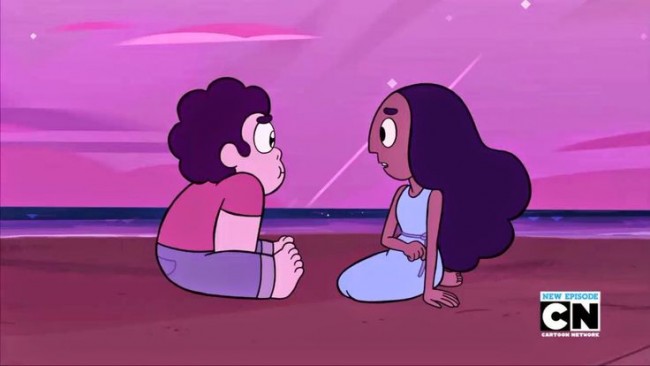 Summer of Steven, you guys … is it really over? Sigh. It’s over, isn’t it? Isn’t it? Are there really more new episodes just around the corner? Is anyone else as excited as I am? That’s a hypothetical question, of course. I’m sure many of us are in the same boat (and boats are expensive, yo!) with SU feels. I’ve written about Steven Universe before, but that article was mostly about the role of music on the show. This one will have a little bit of that, because, well … I need to talk about Pearl, that song, and what it does to my heart. And, music is so ingrained in this show that it’s hard to talk about it without some mention of the music. Mostly though,  I want to talk about the human residents of Beach City, and why they matter, and why how they’re written matters. The Crewniverse makes a real effort to treat the non-super characters as people and individuals with as many facets (gem pun intended), motivations, desires, weaknesses, and strengths as any of the super-powered show headliners. With some of the current goings-on in the SU fandom, treating humans with respect is a topic that should resonate with a lot of us right now.

Lots of shows and movies have super-powered characters, but Steven Universe is unique in that the human residents of Beach City are given chances to be amazing, be imperfect, and grow as characters along with the Gems. Pearl’s development as a character is remarkable. She’s come a long way from the Gem who tried to kidnap Steven to space and convinced Connie that her life was worth nothing compared to Steven’s. Pearl learns, retains the knowledge, and improves herself. It’s part of who she is, and this applies to her interpersonal relationships as much as it does her reinvention and her potential. (See? That song is important!) But, as remarkable as Pearl’s and the other Gems’ journeys are, what is truly unusual in Steven Universe is the attention given to the human characters’ development. There are a lot of episodes about the Gems and fighting and saving Earth and their interpersonal dramas, but there are also episodes that show the human population of Beach City and give the viewer an idea of what it is about these people that is so worth saving. I don’t think it’s humanity’s vulnerability alone that makes it worth saving – I think it’s the complexity and variety and non-homogenous nature of humanity that appeals to the Gems. Certainly, that was a lot of it for Rose. Check out this clip from about the 47 second mark for how Rose feels about humans:

No human character on the show has shown more character growth than Connie Maheswaran, Steven’s human bestie/crush. (“When Connie grows up and becomes president, what is that going to make me? First Boy??”) Connie has changed from a shy, lonely girl whose overprotective parents stunted her confidence to a confident young woman who wants to do her part to protect her planet and her friend. In fact, she’s starting to sound a lot like Garnet in Stronger Than You! Connie’s bond with Steven is more than just the “magic stuff.” She plays the violin and they jam together (while eating actual jam and singing about it), and pursues her interest in learning to swordfight with a single-minded enthusiasm that reminded Pearl of herself, thousands of years ago, when she was fighting to raise the ceiling and reinvent what a Pearl was thought to be capable of. Connie’s lines in the song, “Do It For Her/Him,” about being “just a human,” are purposely parallel with Pearl’s lines about knowing deep down that she wasn’t “made for fighting.”

In the Barn Episode where Steven celebrates his fourteenth birthday and tries to make himself appear older, only to end up turning into a baby when the stress of maintaining an unnatural form gets to him, Connie has a momentary, understandable freakout and talks to Greg about how Steven may not age like she does, but when Greg offers to take her home, Connie stands her ground and decides to be there for her friend even if she has to change the nature of their relationship if he remains a wee Steven. Early Connie might have hidden from her problems the way she hid the “magic stuff” from her parents, but this Connie is made of stronger stuff, and she gets better with every episode. Greg’s supportive role here should not be ignored either. His “human beings” high-five with Connie establishes an alliance between them. Greg has dealt with all of this before, and he’s willing to help Connie go through it now. If anyone knows about the ins and outs of maintaining a relationship with a magical alien, it’s Greg Universe. 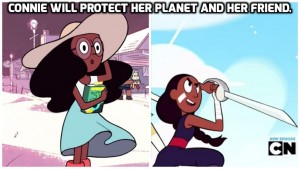 Sadie Miller is a flawed character who at first glance appears far too willing to be a doormat for Lars, but there is more to her character than that. Sadie has positive attributes as well – she was able to stand up to her overbearing mother, she cares about her friends deeply, and she has a strong work ethic. Sadie treats Steven almost like a little brother. Sometimes, she’s just a pat-on-the-head and a shrug away from dismissing him, and other times, their relationship is one part co-conspirator and one part peer. Even though Sadie is older than Steven, his life experience with the Gems and her sheltered life and introverted tendencies sometimes put them on more equal footing. Sadie is a young woman who is learning (slowly) to articulate her needs and desires to her loved ones.

We’ve all been or known a Sadie at various stages of her journey, from trying too hard to be “cool” with the behavior of peers that actually bothers us, to participating in a prank that turned out to be harmful, to hiding the truth to have just a few more precious moments with a crush. I’m not dissing on Sadie, I’m commiserating with her. It’s hard enough navigating teenage crushes and peer relationships without the added potential for things like magical fire salt and portals to magical islands to add temptation and complication where there was none before. It’s important to remember that the Sadie who hid the portal is the same Sadie who stood up to a monster as a regular human being to save a friend, and the Sadie who let her vindictive side take over and gave Lars the fire salt-laced donut is the same young woman who was shy about singing in public, stood up to Lars when he lied to her about having a back injury, and stood up to her mother AND to Steven when they pressured her too far out of her comfort zone when she was going to sing at Beachapalooza. 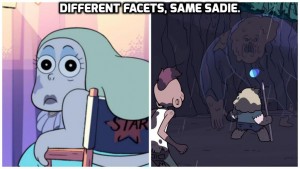 The Summer of Steven provided some insight into some of the other Beach City residents as well. Getting to know the Pizza sisters better was a treat. Jenny and Kiki Pizza are twin sisters with very different interests – Jenny likes concerts and rock music, while Kiki enjoys running. The sisters have conflict, but resolve it not with the help of Steven’s superpowers, but by simply talking to one another. I mean, bless Steven for wanting and trying to help, but what they really needed was some sister-time. There is a really great theme, starting with Connie and Sadie, but also moving throughout the series to other characters, of the importance of learning to articulate your needs to your loved ones. Connie does this when she explains things to her parents, Sadie when she stands up to her mother and Steven, and Kiki Pizza when she talks to her sister and explains that she feels used and tired and needs a break. In this instance, Steven’s magical “help” was doing more harm than good, mostly to his own sanity. He needed to learn that lesson as well, that not being clear about your own limitations can turn a positive relationship into an oppressive situation. Living with super powers or with super-powered beings in your midst is a common trope these days, from Marvel Cinematic Universe to Buffy the Vampire Slayer to Supergirl, and beyond, but what Steven Universe does better than any other show is in showing not only how an individual is affected by their own powers and how their powers save/change the world, but also how regular human beings change them in return. It’s just as much about how knowing Connie changed Pearl as it is about how the Gems save Beach City and the world, and that’s important. 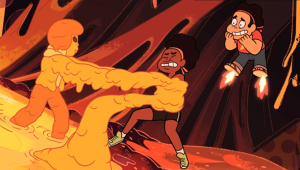 Giving representation to the fast-learning Connies and the slower-changing Sadies of the world is important. We all have different levels of social acuity, different levels of intro and extroversion, and our individual backgrounds can affect our development as people as well. Learning that people come in all shapes and sizes both physically and emotionally and seeing that represented in our entertainment can help us to have patience with the real humans in our own lives, which brings me back to the Steven Universe fandom. While giving praise to the characters and their nuanced personalities, fans often seem to forget that our beloved fictional characters are being brought to life by real human beings with actual emotions, lives, and levels of comfort. The fandom is good at diving in and appreciating the nuance given to our favorite characters, but we need to make sure that we’re giving those beloved characters’ creators the same room to be human beings with real differences. To paraphrase the words of Nora from the old Pete’s Dragon movie, “There’s room for everyone in this town, if everyone makes some room.” 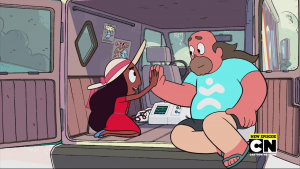