Review: The Hobbit: The Battle of the Five Armies Is the Phantom Menace Of Middle Earth 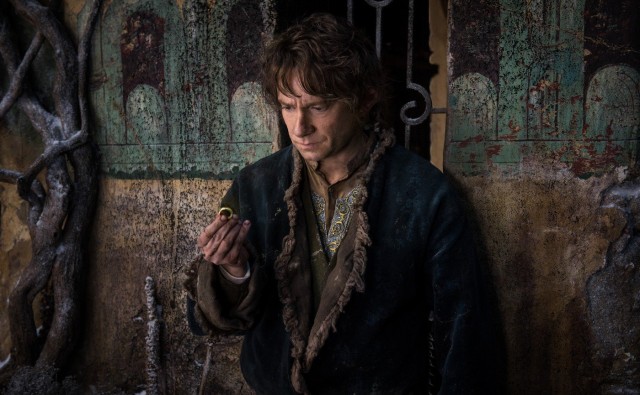 Going by movie order, The Hobbit: The Battle of the Five Armies is Revenge of the Sith; but if we’re looking at quality, it’s The Phantom Menace (ie, the worst) all the way. Granted, it’s not as bad as The Phantom Menace. What is? But it is still, by far, the runt of the Middle Earth franchise family. The Faramir, if you will. Except Faramir is the greatest, and he treats women a helluva lot better than The Battle of the Five Armies does.

This review contains major spoilers for how things go down in funkytown.

But more on Tauriel later. First, I need to address the major, glaring problem with The Battle of the Five Armies, which is that it should not exist. The Hobbit started as a two-part movie, and it should have stayed that way, because by the time Peter Jackson gets around to the third installment, there just isn’t enough plot left sustain its full two hour, 24 minute running time. 90 minutes would have been pushing it.

An Unexpected Journey and The Desolation of Smaug both told their own stories, presented as part of a larger whole but still self-contained. But with Battle, once the dragon-killing is taken care of (it takes about 20 minutes), all the movie really has left to do is build up to and stage what is essentially a bunch of people fighting over a mountain. A mountain that’s not all that important to most of them, at that. Epic this ain’t.

Jackson tries to raise the stakes by piggybacking on The Lord of the Rings, bringing to its conclusion a subplot that ties the fate of the Lonely Mountain with the rise of eventual big bad Sauron. But that never quite hits. The justification as to why the Battle of the Five Armies has any impact on the wider fate of Middle Earth is half-assed at best: If taken by orcs, we are told, the Lonely Mountain will allow two orc armies to join forces, which will somehow (the specifics are glossed over) help Sauron regain his power after Galadriel used her ring power to whammy him into a formless state in cool-looking but narratively unnecessary battle with the Ring Wraiths near the beginning of the film. But we know, because of The Lord of the Rings and because Saruman in this movie tells us, that Sauron’s play will have to involve getting the One Ring—the Lonely Mountain is ultimately completely irrelevant. There’s some lip service paid to the fact that the two armies joining will lead to the “Age of the Orc,” but that’s something that’s just tossed out there and never really explored. Need baddies for your characters to fight, but don’t want to put too much thought into it? Mindless Orc army! Sure!

So, with the fate of Middle Earth firmly not in the balance, we’re left with the dwarves fighting in the Battle of the Five Armies to keep their homeland (OK), Gandalf and Bilbo fighting to save their dwarf buds (OK), Elves fighting because they hate dwarves and to get some diamond jewelry back from them (SERIOUSLY), and Bard and his fellow Laketown refugees fighting because Thorin (Richard Armitage) refused to give them the gold he promised in exchange for their help in The Desolation of Smaug. Let me repeat that: Bard & co., pissed that Thorin didn’t deliver promised payment for services rendered re: questing, decide to fight in a war that will probably kill them all. I know that being left as penniless refugees sucks, but I also know it’s not necessarily fatal, because of the dwarves at the center of this entire trilogy.

I don’t know if that’s how things happened with Bard in the book—it’s been about 20 years since I read it—but I also don’t care, because I’m talking about the movie, and in the movie, it makes no sense. Bard has zero narrative importance for the last 2/3 of the movie, but he keeps popping his head in, because Jackson needs to pad the runtime with more battle scenes. Once the battle’s over, he disappears completely. Were he and his fellow villagers able to rebuild Laketown? Did he ever accept his position as the town’s new Master after protesting against it even as he was leading his people into battle (another instance of Jackson saying, “Hey, that worked in The Lord of the Rings. Let’s give it another try!”)? Did he ever return the Arkenstone, last seen in his possession maybe halfway through the movie and then completely forgotten about, to the dwarves? (When he’s 80 years old, he finds it in his sock drawer. “Heyyyy, this was important, wasn’t it? Should I mail it to someone, or…?”)

The movie’s full of plot points and character relationships (like the out-of-nowhere friendship between Thorin and Dwalin) that are leaned heavily on in the first half, only to be dropped completely once the battle starts, which results in a film that, when it turns its focus away from Thorin (which it does much of the time), is emotionally empty. Because, again—there is not enough here for a whole movie.

So Grima Wormtongue Light, aka Unibrow, aka Stephen Fry’s flunky from Desolation, KEEPS. GETTING. SCREENTIME. So the centerpiece battle is so drawn-out that Bilbo, the main character, is left wandering around with nothing to do for a good quarter of the movie. So there’s this trippy hallucination scene of Thorin’s that outlasts its welcome about 30 seconds in. So scenes of actual character development—like those between Legolas and Thranduil—are scattered in between endless (albeit cool) fight scenes, ultimately diluting their effectiveness.

Without a single narrative throughline sufficiently weighty to justify the continued involvement of most of the main characters, just about everyone besides Thorin kind of… bops around, rearing their heads when the story calls for them to do something important and then dutifully heading offscreen when it’s someone else’s turn. The most infuriating/hilarious manifestation of this was with Dwalin. He’s present at the smaller skirmish that sees Thorin, Fili, and Kili all meet their demise. He’s around. Then, about halfway through, as everyone’s well and truly getting their asses kicked, he just… disappears. Did he die? He’s been kind of major so far—it’d kind of be weird if he died and they didn’t show us. Nope. He’s still kicking. We see him in a group shot at the end of the film. Maybe he took a coffee break?

The movie has some positive bits. Thorin’s arc was, for the most part, done really well, and Richard Armitage performed beautifully. Ditto Lee Pace as Thranduil, who was, for me, the movie’s biggest highlight. There’s Legolas, too. On the one hand, he was another example of Peter Jackson trying to shore up Battle’s gravitas with an overreliance on the Lord of the Rings playbook—if we hadn’t already cared about Legolas from the original trilogy, we wouldn’t have here, because there was very little character development. On the other hand, this translates to “Legolas shows up, makes dippy faces, says cryptic shit, and drama queens it up with increasingly extravagant battle moves” (there is an equivalent to the “skateboard down the stairs” moment from The Two Towers, and it involves a warrior bat), so if you find that fucking hilarious, like I do, you’re in for a treat.

There were also the requisite amazing battle moments we’ve come to expect from Jackson. The orc who headbutts a wall down is my new favorite character in the entire franchise. Sorry, Faramir.

Also, congrats if you’re into Thilbo (Thorin/Bilbo), because this movie is not even subtle with it. I would not at all be surprised if I heard that Richard Armitage and Martin Freeman talked it out and decided to play their characters as if they were lovers. Every time they have a fight about how one has ~~~betrayed~~~ the other, it looks like they’re both about to burst into tears and then start making out.

I’m just sorry about… y’know, the other stuff, Thilbo fans.

But none of those good bits are enough to make up for the flaw that really cancels my second breakfast, which is what The Battle of the Five Armies did to Tauriel. She went from being a character driven by moral and political convictions to one for whom 95% of her screentime revolved around her being in love with Kili and/or having her Elvish bacon saved by Legolas. Jackson—rightly—acknowledged the importance of representation when he added an original female character to a trilogy that otherwise would have been a near-complete sausagefest (or maybe take out the “near”—even Galadriel, who got her moment of BAMF here, wasn’t actually in the original book), which makes it all the more bewildering, not to mention infuriating, that by the time the credits roll she’s a damsel almost entirely defined by her romantic attachments. Fuck that noise.

And then there are Bard’s three children–two girls, one boy. One of them gets to charge around being all badass, rescuing his siblings, and helping dear Dad in battle. The other two run around screaming. Guess which is which.

All that said, while I wouldn’t recommend shelling money out to see The Battle of the Five Armies in a theater, if the treatment of Tauriel and the general sloppy storytelling aren’t completely dealbreakers for you, and if you consider yourself a fan of the other movies, I’d catch this one on DVD. For completion’s sake, yes, but also because, if you go in knowing and accepting that it’s going to be stupid as hell, there are still big chunks of the movie that are really fun. The Hobbit trilogy has always suffered in comparison to The Lord of the Rings, and sure, The Hobbit is by far the inferior trilogy, but it’s not awful, even if at times The Battle of the Five Armies skirts perilously close to that line. It’s a disappointing follow-up to a trilogy that redefined fantasy cinema, but judged on its own merits, it’s… OK. There are lots of things to like.

contributorPeter JacksonreviewTaurielThe HobbitThe Hobbit: The Battle of the Five Armies