The Handmaid’s Tale and the Fiction of Prediction 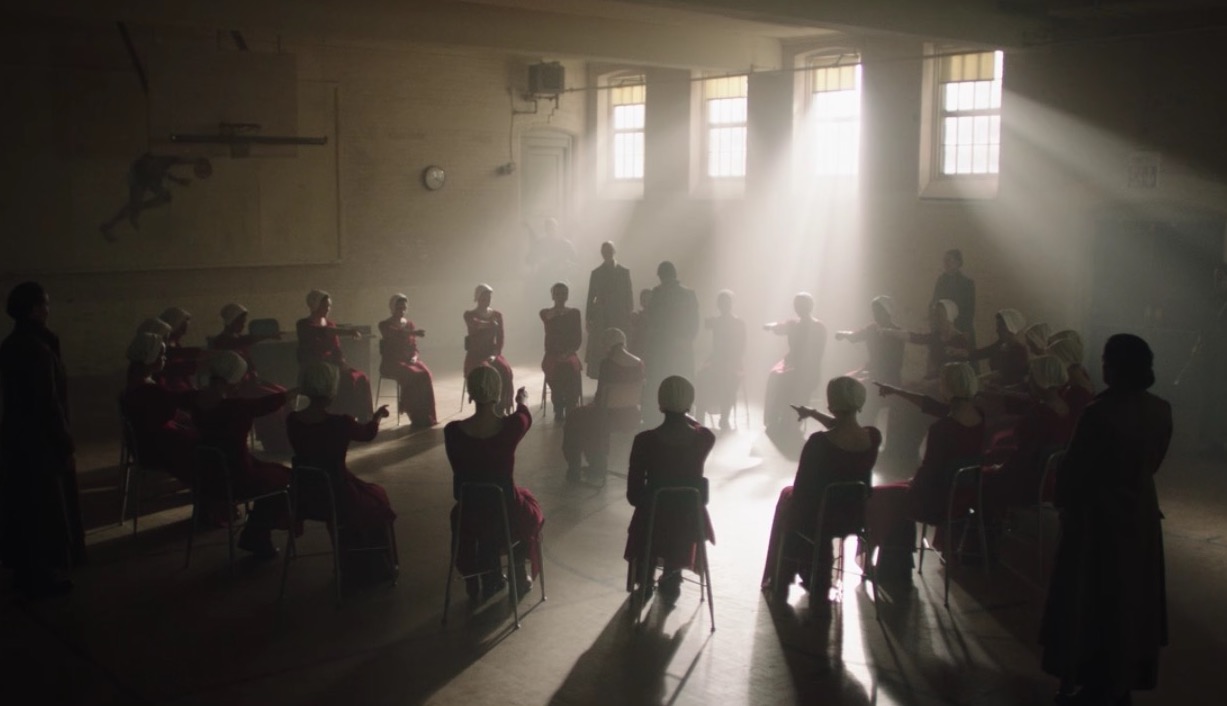 At one point in Margaret Atwood’s The Handmaid’s Tale, a rape victim is surrounded by other women ritually chanting that the rape was her own fault. I live in the UK, so haven’t managed to see the new television adaptation yet, but I imagine it makes a powerful scene. Perhaps as powerful as the one where a woman is forced to pretend she’s enjoying sex, because that’s what she’s for, and the man has gone to so much trouble to take her out. Or the one where the State strings abortionists up on the Wall, for everyone to enjoy, or the one where the woman who gives birth is immediately abandoned, her purpose fulfilled, and a simple game of Scrabble is the greatest rebellion.

Margaret Atwood didn’t stamp a foundation date on the Republic of Gilead, but the novel exerts as powerful a hold on readers in 2017 as it did upon publication in 1988. Is a room full of older white men determining that rape should be classed as a pre-existing condition for health insurance purposes really so different from declaring that there must be some form of punishment for women who have abortions, as in The Handmaid’s Tale? What’s the expiry date on a terrifying futuristic vision? Clearly, three decades is not enough.

What about twice three decades?

Six decades ago, in Nineteen Eighty Four, George Orwell wrote of a totalitarian regime in which every home, building and public space is monitored by a screen, which broadcasts as it surveys. Winston Smith, performing his compulsory morning exercise at his telescreen, finds himself reprimanded by Oceania’s Jane Fonda for not trying hard enough. From Poltergeist to The Ring, the blurring of the line between the screen and real life has been the stuff of horror, not science fiction. For Orwell’s original readers, the idea of being personally addressed from the telescreen was one to fear—the loss of individual freedom expressed in a moment.

Where lies the horror now? For the modern reader, such reprimands are the stuff of everyday life. I wear a wristband that shouts at me if I haven’t moved for an hour. My phone throws up dresses I can’t live without, because I once bought one online. My laptop puts together my weekly grocery shop. ‘Antonia,’ it trills merrily, ‘have you run out of Medium Sliced White Bread?’ Sometimes I feel like Tom Cruise in Minority Report, haring down a station corridor while the models on the advertisement hoardings literally turn and call his name. Even more so when the next notification I receive is extolling the virtues of wholemeal.

And yet, if I step away from this intrusion—if I do all my shopping in store, in person, with cash, and I throw away my smart phone—I’ll lose my primary means of connection with the world in which I live, in which I am bringing up my children. More than this—I’ll lose the time I save by being able to shop, e mail, research, chat and read at the touch of a button. It’s a trade off—one that allows me to do my piano practice. Bake. Write. It drives me mad, and it keeps me sane. That’s the great oxymoron of our time, and Nineteen Eighty Four is our warning light. Sleepwalking to Oceania cannot be an option.

Step back seven decades, and Aldous Huxley shows us a world in which babies are grown in glass jars, their future lives laid out for them by the section of society in which they’re born. Leaving aside the vast advances that have been made in the science of conception and gestation since Brave New World was published in 1932, set against which a baby developing in a jar doesn’t seem such a great leap, we do seem to be moving towards a world in which success or failure is set out at birth.

In our world, education standards have become inextricably linked to parental wealth; earning potential is determined not only by education but by family connections and social environment. Wealth has become a justification in its own right as the gap between the rich and the poor becomes more extreme and less bridgeable. Show me where in the world a child is born, and the education and income level of its parents, and I’ll be able to predict, with some confidence, whether its life will be lived as an Alpha or an Epsilon.

Once, we used our fiction to send our heroes into space, to restore peace to warring galaxies. We were noble and brave, and our incursions into distant and dangerous realms brought hope and justice. HG Wells published The War of the Worlds in 1897; the chances of anything coming from Mars are still a million to one.  And those pesky Martians weren’t even strong enough to defeat the germs that we human beings fight off every single day. But our world has changed. The mirror of science fiction can also show us, not as heroes, but as a flawed and arrogant animal, seemingly intent on destroying the very best of ourselves.

We’re faced with impossible questions, dilemmas that are too big for the individual to solve. Our planet needs action on the largest scale, governments that embrace and accept the scientific evidence of the damage that human activity has done and is doing. I cannot refreeze the ice caps by watching videos of disorientated polar bears, or solve poverty by donating to the food bank; I cannot give the homeless person in the doorway a place of refuge by giving a few coins. My advantage is as systemic as Winston Smith’s oppression, as Offred’s eradication as an individual, as the monotonous, servile life of the Epsilon.

The rise of technology, the uneven distribution of freedom, the comfort of victim-blaming, perpetuate themselves in spirals. It seems that all we can do is close our doors—to surround ourselves with caring, loving people with whom we are in sympathy, bar our doors and turn off the news. Faced with a collapsing society, the people in my book The Ship do just that.

But we must continue to face the ugly parts of life if we are to change them. If we resist, like the Mayday rebels in The Handmaid’s Tale, maybe eventually we will be able to consign these dire visions to the past, and enjoy them as the fictions they should be.

Antonia Honeywell studied English at Manchester University and worked at the Natural History and Victoria and Albert Museums in London, running creative writing workshops and education programmes for children, before training as a teacher. During her ten years teaching English, drama and film studies, she wrote a musical, and a play which was performed at the Edinburgh Festival. She has four young children and lives in Buckinghamshire. The Ship is her first novel.