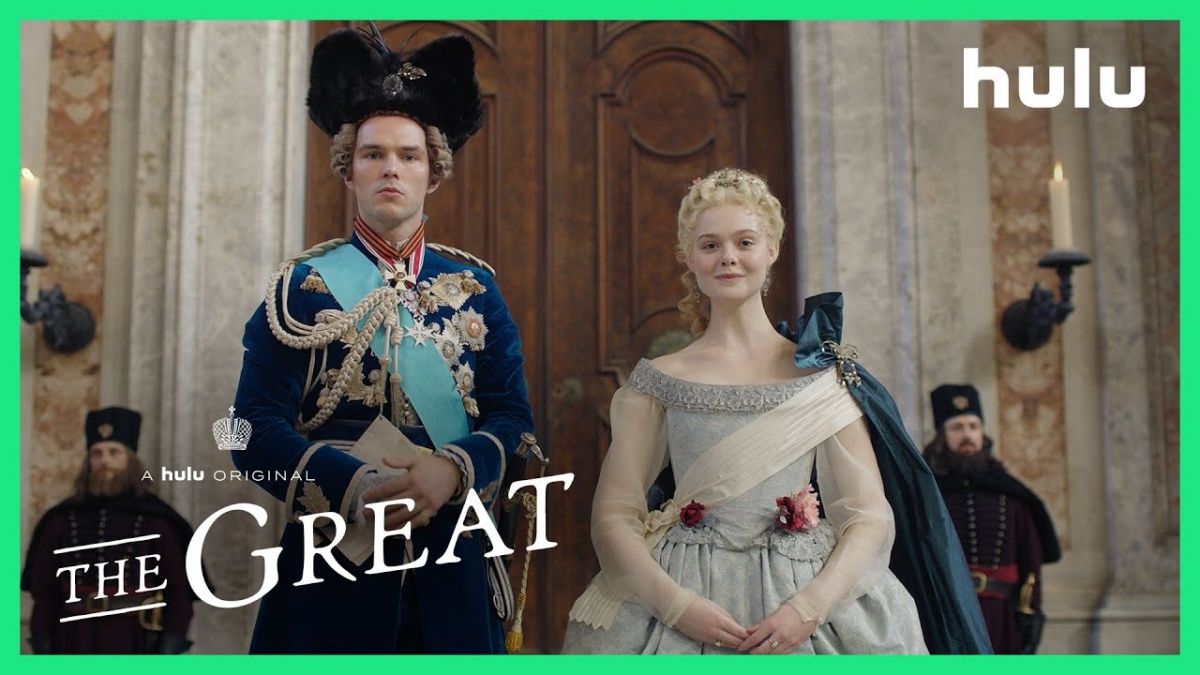 I spent the weekend watching Hulu’s The Great, starring Elle Fanning and Nicholas Hoult as Catherine the Great and her doomed husband, Peter III of Russia. While the show is beautiful, well-acted, and hits enough jokes to leave you interested, to call it a series about Catherine the Great would be … well, a stretch.

There are a lot of historical dramas that take liberties or twist things around. That’s normal, even combing historical characters together, but The Great just ignores history altogether, which just makes you wonder … why is it even based on Catherine the Great?

One of the most interesting things is that the series makes Catherine’s turn from bride to tsar/empress take place in just six months—I suppose to make her seem more clever, but considering how unplanned and foolish some of her plans are, it only makes me feel like Catherine’s coup was a happy accident.

Catherine was married to Peter III in 1745, during the reign of Elizabeth of Russia. Elizabeth was the daughter of Peter the Great (in the show, she’s his wife, so that Peter III can be Peter’s son, rather than grandson, for … reasons. Also, Elizabeth was Peter III’s aunt, not mother), who was a volatile yet popular leader because she decided not to execute a single person during her reign. Things like theatre, music, and architecture were well known in her court, contrary to the show, where it’s implied that things like science, art, and reading were frowned upon. While Russia, at the time, was still not exactly a modern European nation, the show makes it seem like an anti-intellectual backwater.

Elizabeth played a huge role in Catherine’s life. She was the one who picked the young woman to be Peter’s wife, and when Catherine and Peter had a son, Paul (who was around 7 when his father died, rather than still in the womb, as the show depicts), Elizabeth did the work of rearing the child to be emperor of Russia one day.

None of this exists in the show, and again, I’m not really sure … why? There was plenty of drama to be had in this part of Catherine’s life, especially since she had multiple lovers, and people even speculated whether Paul’s father was Peter, but it all seems to be flattened to make Catherine an ingenue.

The six month time span is accurate, at least, to how long after Paul’s reign started that Catherine took over, if not to her planning. In 1762, with the help of her lover, Grigory Orlov (who is Orlo in this series and is flanderized in the worst way), Grigory Potemkin (another favorite), and others, she got Peter arrested and forced him to sign a document of abdication so no one would stand in the way of her rule. Within six months and eight days, she was the undisputed empress of Russia.

I think the reason why the changes to history bother me, more than they do in something like Reign or The Spanish Princess, is because the changes just make Catherine a very boring character. She is treated as a very idealized “woman ahead of her time” who managed to become Empress in spite of herself, rather than the excellent chess master who succeed after years in this court. We see so many scenes of Catherine floundering and failing to fully understand Russia, yet we are supposed to think she was the best person for the job because everyone around her was so inept.

But Catherine was the best person to be empress because she was the smartest person and surrounded herself with equally intelligent and charismatic figures. Catherine also knew when to be cruel and was responsible for ordering the killing of Ivan IV, a small boy, an act that the show makes Catherine too softhearted to accomplish.

Peter, while not a great ruler by any means, did attempt to make some progressive reforms, like giving people religious freedom, encouraging education, and abolishing the secret police. While the show makes Catherine seem like an ally to the serfs, it was Peter who made it illegal for landowners to kill their serfs without going to court (which … you know, good not great), whereas Catherine took away their right to petition her for help. Catherine was an enlightened despot, but she would still be a despot.

Catherine was a political animal and a complex woman. The show, while comedic and well-acted, just makes her another soft-faced girl boss who is so all-consumed with love that she almost ruins her own plans. While, for example, The Favourite also played fast and loose with history, it was telling a much smaller, character-driven story than we’d seen before. The Great does not share that same advantage.

That being said, it is a fun show and very watchable. Elle Fanning is a delightful actress, and I’ve honestly forgotten she is not British. Nicholas Holt is a true comedic talent, and I hope we get to see more of that going forward. If you want some Catherine the Great facts, check out the biography from Robert K. Massie or the last few minutes of this Epic Rap Battle of History.