GOP COVID Package Is So Awful, Even Republicans Hate It | The Mary Sue

The GOP Coronavirus Package Is So Awful, Even Republicans Hate It 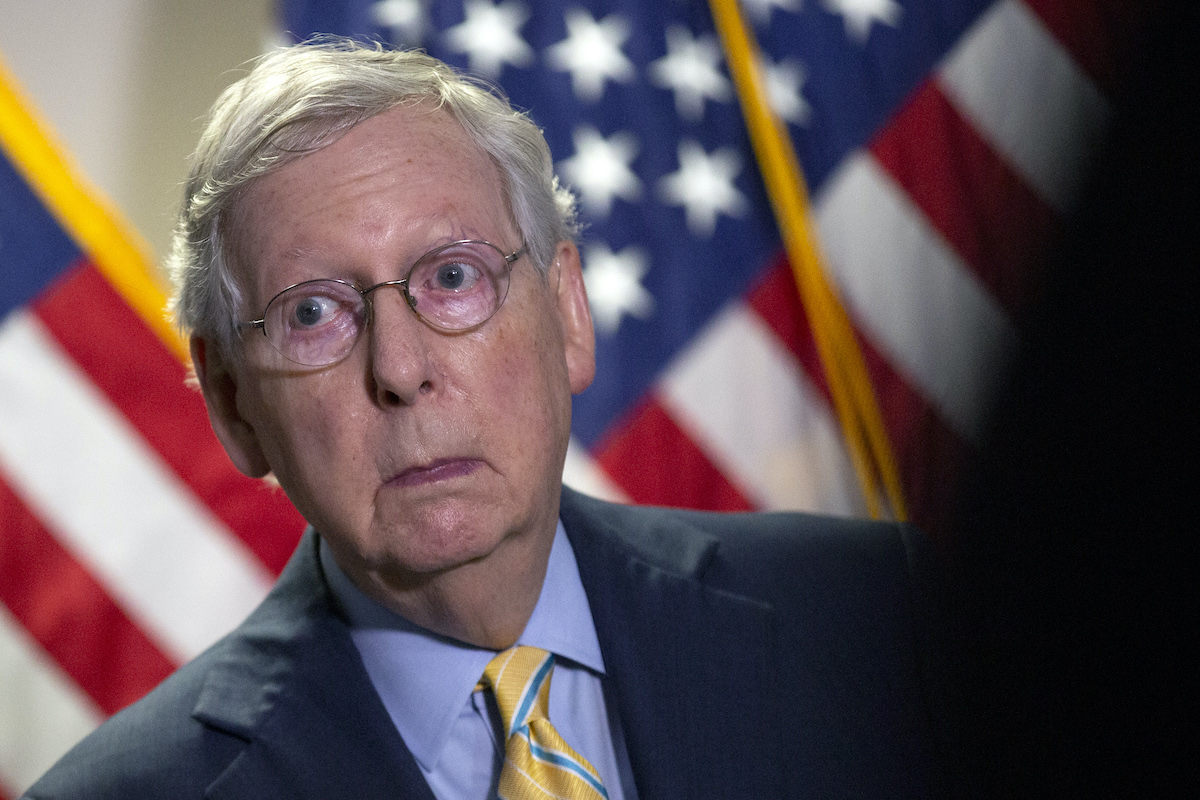 Senate Republicans unveiled a $1 trillion coronavirus stimulus package Monday and then spent Tuesday fighting about how terrible it is, making it very clear that any sort of much-needed financial relief isn’t going to come any time soon, not until we’ve gone through a few weeks of arguing.

The package is truly awful. It offers another paltry $1200 direct payment for most American adults and it reduces the extra unemployment benefits from $600 a week to $200. There’s also no protection against evictions for renters, something Democrats have been fighting to keep while Trump, weirdly, blames them for its absence.

Utterly disconnected from what Senate Republicans are doing, which is fighting for a modestly lower stimulus payment and much lower jobless $$ than House Dems.

But even without the Democrats’ demands, Republicans had plenty to take issue with in their own bill. According to Politico, GOP senators aired their grievances with the package both publicly and in a private lunch with senior Trump administration officials. Multiple senators complained about not even understanding what’s in the bill, which, bizarrely, includes a $2 billion provision for funding a new FBI headquarters in Washington DC.

John Kennedy of Louisianna said, “I’m not going to vote for a bill in the name of unity when I don’t know what’s in the damn thing.”

My own terrible senator, Josh Hawley of Missouri, said of the proposal: “It’s a mess. I can’t figure out what this bill is about. I don’t know what we’re trying to accomplish with it.”

Many others were critical of the cost of the package. Rand Paul said, “It’s just very frustrating to me because it’s people who go home and say we’re fiscally conservative, [and] are now in a bidding contest with the Democrats to see how much money they can spend.” (Although it should be noted that Paul doesn’t even want a new package in the first place because I guess he thinks people are doing just fine during this terrifying pandemic.)

Even Mitch McConnell, who oversaw the drafting of this bill, doesn’t seem totally on board with it—especially the weird FBI funding, which is reportedly being pushed by the White House and which Democrats say is designed to increase the property value of Trump’s hotel, which just happens to be right across the street from the proposed location.

McConnell, for his part, said he opposes “non-germane” provisions in any final coronavirus relief package, effectively shutting down the effort.

“When we get to the end of the process, I would hope all of the non-Covid-related measures are out, no matter what bill they were in at the start,” McConnell said.

When asked about the FBI funding, Graham said he would support stripping it out of the final bill, adding: “That makes no sense to me.”

Sen. Ron Johnson (R-Wis.) said it “was kind of a strange addition,” while Sen. Pat Toomey (R-Pa.), a fiscal hawk, said he was “a little surprised by that.”

“I’m pretty skeptical about the way it seems to be shaping up,” Toomey said about the overall bill.

John Thune of South Dakota, the number two GOP Senator, said “it came as a surprise to a lot of people that the funding for the FBI building was in the bill. They’d have to make a better argument than what I’ve seen so far.”

“I don’t think there’s a lot of support from our members for issues in the bill that are not directly related to the coronavirus,” he added, per The Hill.

As the extra unemployment benefits run out and the moratorium on evictions ends, as nearly 150,000 people in the U.S. have died from the virus, Donald Trump is trying to increase his own personal gain off of one of his tacky hotels.

But $1.7 billion handout to rebuild the FBI building & help increase the property value of the nearby Trump hotel. https://t.co/0pfSxwl6or

Trump’s response to those GOP critics, by the way, is that they should “go back to school and learn,” whatever that means.