The Gamers: Hands of Fate Will Make You Laugh, Cry, Confront Sexism

However, the filmmakers invited us to critique the newly-released The Gamers: Hands of Fate, which has two key differences from its predecessors. Firstly, Hands of Fate leaves character sheets behind, and ventures into the realm of collectible card games. It also hopes to spark continued conversation about sexism in gamer culture.

The story opens with the leads from the second film, Dorkness Rising — Lodge, Leo, Joanna, Gary, and Cass. For years, the gang has been futilely attempting to finish their Pathfinder campaign (boy, do I know that feel). As their session collapses, Cass leaves the back room for the gaming store proper, and finds himself face to face with tables of CCG players, or, as he calls them, “a gaggle of shambling fail elementals, cloying the air.” Cass has some issues with CCGs.

His tune changes quickly upon the appearance of Natalie, a tournament-level player who has come to compete. He buys a pack of cards, sits across from her at the table, and asks for a date. Natalie, to her credit, does not cry “fake geek boy!,” but still soundly turns him down. Aside from being uninterested, she’s got bigger things on her mind: her game — The Romance of the Nine Empires — is in danger.

The fictitious Nine Empires has a vast storyline, spanning fifteen years of play. Tournament outcomes influence the lore, and the winners choose the direction the story will take (this sounds entirely awesome, by the way). But a real-world threat looms over the fictional land of Countermay. A cabal of players known as The Legacy have created game-breaking decks that are nigh unstoppable. If their faction wins the world championship, Countermay will fall to the undead hordes, and worse, the majority of players’ decks will become useless. Players have already been abandoning the game in droves, and even the game’s head writer fears that a Legacy win will be the end of the Nine Empires.

This is what Natalie’s worrying about when Cass asks her out again, following her loss of a critical match. “Win Gen Con for [my faction], put my queen on the throne, and sure, I’ll go out with you,” she says. It’s a joke, but Cass’ path is now set. It’s off to Gen Con Indy, on a mission to get laid.

Meanwhile, within the world of the game, epic hero Myriad has the nagging feeling that events in Countermay are repeating themselves, over and over. It’s almost as if she’s encountered these enemies before… 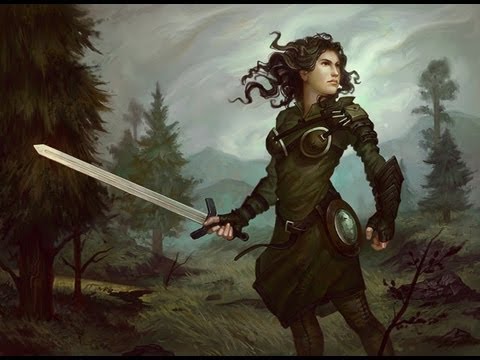 Let me touch upon the movie as a whole before I dig into Cass and Natalie. No matter what sort of gamer you are (CCGs are admittedly not something I have tried), Hands of Fate is a love letter disguised as an inside joke. This movie is crammed with countless little moments that will make you grin with recognition. The guy with a blood feud against a con mascot, the late night waffle house conversation about hydra genitalia, the endless slog to just finish the damn campaign — you know who these people are. You’re probably one of them yourself. As was the case with Dorkness Rising, Hands of Fate left me loving gamer culture, and desperately itching to play something (I scheduled an Arkham Horror session immediately after I turned off my TV).

So what of the main plot? The initial description gave me pause, as did the set-up within the movie. But here’s the thing I’m delighted to report — Hands of Fate took a problematic, oft-used boy-wants-girl template, and deftly shaped it into a more unique tale of a community rallying together, and of two likable characters with their own separate arcs. This is not the story of a man on a quest, and the woman who owes him. Nor is it the story of the ladies man who accidentally finds love while on the prowl. It could have easily gone in either of those directions, but Hands of Fate is smarter than that. Natalie is solidly established as a woman with agency and autonomy (as is Myriad, whose scenes add a nice harmony). Cass does indeed fall in love, but it’s with the game, not the girl. I don’t want to spoil much, so let me leave it at this: there’s a line in Cass and Natalie’s final conversation that, no kidding, made me slow clap. Yes, it ends well.

The more I think about it, the more I am impressed with the filmmakers for intending this story as an offering to the women-in-gaming conversation. There is no hard-hitting lesson here. The audience is not beaten over the head with the Wooden Cudgel of Morality (+2). The depictions of harassment and prejudice are not subtle, but neither are they sermonized. I felt as if the movie was saying, “We have a problem. It looks like this. We need to talk about it.” The primary characters make their feelings on the matter clear. Leo throws a guy out of his shop for crudely harassing Natalie (”Fascist!” the offender cries). Lodge, providing nature show narration over the throngs at Gen Con, makes a quip about the male gamers unsuccessful in “finding a mate,” who will retreat home to “content themselves with comic books, video games, and their latent misogyny.” But though I appreciated the overt commentary, what hit home more was Natalie’s story, which unfolds more cleverly.

The obvious choice would have been to tell a story about a woman who proves herself by defeating her harassers and winning the day. We’ve all seen variants of that narrative, and I personally have a lot of problems with it. As much as I love to see capable women doing awesome things, there’s a big difference between that and the implication that we need to prove ourselves before we can expect to be treated with basic decency. The latter tells us that if we achieve flawless victory, our detractors will melt away. And that’s just not true. Yes, some guys change their act, but to many of the worst offenders, skill level is irrelevant. Last year, we posted a story about Magic: The Gathering competitor Jackie Lee, who, despite being one of the top 100 players in the world at the time, put up with a mountain of abuse during her livestreamed semifinal match at the Baltimore Grand Prix. Being good is not enough.

Natalie is not the plucky newcomer who picks up a deck and wins everyone over. Natalie’s been there for years, playing hard and improving her game. None of her skills render her immune, and none of her wins prompt a change of heart. Natalie’s experience is one that I think many female gamers can relate to, no matter what we play, and regardless of how competitive we are. The weariness on her face when she’s being harassed in the game shop — I know that face. I’ve worn that face. When Cass asks her how she puts up with it, her answer was familiar: “Comes with the territory.” Later, during an argument, Natalie speaks passionately about her love for the game. Cass says, “Why do you even care? All I’ve ever seen is these asshats tearing you down and ignoring you.” Natalie doesn’t answer the question. She didn’t need to, as far as I was concerned. I knew the answer. She cared because it was her game, and because all the jerks in the world weren’t going to make her stop loving it. I could have admired a story about a champion whose victories inspire change, but I would not have related to it. Natalie, on the other hand…I think if you frequent The Mary Sue, you know who Natalie is.

I’m not going to spoil her story, even though I could write another page on why her climactic scene made me tear up. It’s not what you expect. It’s not a trophy and an apology. It begins with one short sentence, and grows into something wonderful. And if I am totally, embarrassingly honest, that sentence, and the sentiment that went along with it, is all I really want when I play.

Don’t mistake Hands of Fate for a thesis statement on the issue. Approach it for what it is: a flawed-but-charming comedy that highlights the bad, embraces the good, and does both out of love. Watch it with your friends. Think about it. Pick it apart. Cass and Natalie’s stories have room for interpretation, and you may see them differently than I did. That’s okay. That’s a good thing. The filmmakers’ intent, as I understand it, was to keep people talking, and to have fun doing it. In that, at the very least, they succeeded.