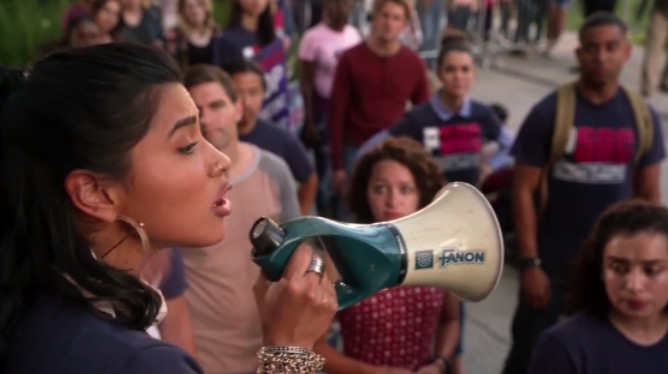 The Fosters, which airs on Freeform (formerly ABC Family) and wrapped up the first half of its fifth season on September 5th, has always used its platform to amplify the concerns of young people on the margins—those who are LGBT, homeless, incarcerated, facing an unplanned pregnancy, and/or experiencing sexual exploitation, just to name a few. The show consistently explores the full inner lives of these people without resorting to sentimentality or heavy-handedness. Much like another one of Freeform’s original offerings, Switched at Birth—which ended this year after a 103-episode run in which it broke ground through its portrayal of the diverse d/Deaf and hard of hearing experience—The Fosters tackles multifaceted social issues under the guise of a teen drama.

In an interview with Entertainment Weekly on April 11th, co-creator Peter Paige said, “Season 5 is a little bit of a reset to our family, our home, and the sort of simpler and brighter and happier times that our family really needs.” Still, in the first half of its fifth season, the show managed to tackle a number of social issues, such as the struggles of undocumented youth. On the same day that the Season 5A finale aired, Trump announced his decision to repeal Deferred Action for Childhood Arrivals (DACA) protections for the nearly 700,000 young people who rely on the policy to be able to thrive at school, at work, and in American society without having to worry about being deported to their respective countries of birth—countries that oftentimes are as foreign to them as they are to any native-born American. Yet the show built up to its statement on the importance of DACA in an organic way, with budding artist and former foster teen Callie (Maia Mitchell) forging a strong friendship with art student Ximena (Lisseth Chavez).

As a campus battle between free speech and hate speech rages on, each young woman must weigh the benefits of standing up for what they believe in against the potential costs. For Callie, who has had more than a few run-ins with the law, that means deciding whether or not she is willing to be arrested if a peaceful protest against a bigoted speaker takes an unexpected turn. For Ximena, who is undocumented, that means questioning whether or not to speak out against hateful rhetoric, since doing so could mean revealing her immigration status.

Callie obviously empathizes with Ximena. As someone who went through seven different foster homes over the course of seven years, the concept of home has always been a challenging and sometimes foreign one for Callie. As someone who is in a privileged position with two loving mothers in Stef and Lena, but who still consistently finds herself being written off by a system that only sees her as an extension of her thick file, she knows the feeling of being caught between worlds. She understands the importance of, in the words of her little brother Jude, having “an anchor.” Ximena declares, rightly, that she is “just as much an American as anyone in this country.” In the days of Callie’s contentious custody battle, Stef and Lena reassured her that she was a part of their family, regardless of whether they had a piece of paper to make it official. These ideas resonate with Callie because of her background.

“I’m not gonna be afraid to take a stand,” asserts Ximena, after she tells Callie, in Episode 5, that she is undocumented and has not re-applied for DACA in order to protect her family at their new address.

“I get that,” replies Callie. “I’ve done that. It got me sent to juvie. It’s just, I think there’s a difference between being brave and being stupid. Even if you’re right … I’m just trying to fly under the radar.”

“By staying silent? That doesn’t sound brave to me.”

But Callie is trying to find a balance between being socially responsible and socially engaged. In Season 4, one of her efforts to help others landed her in juvenile detention for the third time. She was not only staring down the prospect of serious time in adult prison, but she also spent time in solitary confinement and experienced its psychological toll. Season 5 finds Callie stepping back from her reckless ways and fully exploring the potential limits of her art, including how she can use her art as an alternative vehicle to change the world.

While incarcerated young people subjected to solitary confinement are forced to suffer in silence, undocumented youth are raising their voices and capturing the attention of the nation. Callie joins them in protest, and despite initially fleeing from said protest due to her fear of being re-arrested, she ultimately goes all in. The moment of truth comes in Season 5, Episode 9 (titled “Prom”), when ICE agents show up looking for Ximena at the unsanctioned school prom, being held at the roller derby rink with which Ximena is affiliated. Callie helps Ximena find refuge in a local church. The two girls (along with Callie’s ex-boyfriend AJ, who has also clashed with Callie over her views on social justice) barricade themselves inside, while ICE stands outside the door. It’s a mid-season finale cliffhanger that unfortunately has never felt more relevant.

As the Trump era has led many to internalize just how fragile our American democracy is, The Fosters has raised the stakes for its characters and has forced audiences to take a hard look at the complex institutions whose systemic influence we cannot escape and whose existence many see as fundamental to our American society—the child welfare system, the correctional system, the Church, and the immigration system.

Alessandra Bautze is a writer whose work often tackles diverse issues of social import. Her screenplays and television scripts have garnered numerous awards. She holds an M.F.A. in Screenwriting from The University of Texas at Austin and a B.A. in The Writing Seminars and Film & Media Studies from Johns Hopkins. She loves strong female protagonists and is an avid fan of Doc Martens. Visit her website at alessandrabautze.com or follow her on Twitter and Instagram @abautze.