How Star Wars: The Force Awakens’ Kylo Ren Is a Gatekeeper 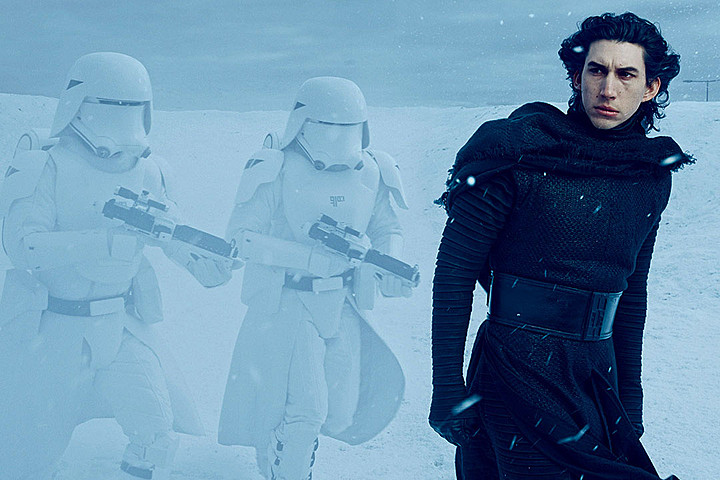 When I finished watching The Force Awakens, I had the nagging feeling that I recognized Kylo Ren from somewhere. Didn’t I see him leering at the Con Girls at C2E2 last year? Maybe it was on a Facebook thread, where he explained why the all-lady Ghostbusters would never be successful. His voice is so familiar — was he one of the guys who yelled slurs at me when I used to play on X-Box Live?

And then I gasped, clutching my pearls as it all came together: Kylo Ren is a Gatekeeper.

The gatekeepers of the nerd world are omnipresent; was there ever a time when you could like something without the threat of a finger getting wagged in your face for not liking it the right way? It seems like J.J. Abrams has read the same rants I have, the ones where nerds argue about the presence of fake nerds mucking up their beloved franchises. But instead of rolling his eyes and moving along (my cup of tea), Abrams scratched his chin, laughed, and thought, “These dudes would make the perfect Star Wars villain.”

Ben Solo was just a kid when he started to turn to the dark side of the Force. The bitterness of gatekeepers always seems to stem to the same age — the loneliness of being young, and the resentment held against anyone from the outside. From what we can glean from the movie’s dialogue, this decision to send Ben to train with his uncle, Luke, weighed on their family.

We’re not entirely sure, yet, what then led Ben Solo into Supreme Leader Snoke’s sun-dried tomato arms, but his resentment towards his father paints a picture of teenage rebellion. So when Ben Solo felt abandoned by mom and dad, he looked for glory in a definitively inglorious person: Darth Vader, aka Pop Pop. He became a fanboy, donning a fanboy Darth Vader mask and swearing to honor his legacy.

Like a 90’s kid creating his first AOL screen name, Ben Solo rebrands himself as Kylo Ren and joins Snoke. His trajectory here reminds me of those atheists and anarchists who band together to shit talk everyone else, somehow becoming everything they hated about institutions in the first place. Ben may have thought he was going against the man, but he only opened himself up for Snoke’s manipulation.

But Kylo Ren lacks the self-reflection to realize this: in his mind, he is very, very right, and anyone who opposes his ideologies is lesser, certainly, and likely altogether unworthy of his time. He treats the Force like it’s his, like he’s the only one who could possibly understand it.

If Kylo Ren is a gatekeeper, then Rey is every girl who’s ever been shut out of conversation by him. She’s reluctant to face Kylo Ren head on — I mean, who wants to enter into a verbal spar, let alone a physical one, with a guy who discounts your existence? He always refers to Rey as “the girl,” “scavenger,” etc. He remembers Finn by his serial number, but he can’t remember someone’s name that’s one letter away from his own?

Kylo Ren would have gone on ignoring Rey if her existence hadn’t directly interfered with his comfort, or — more specifically — his privilege. But Kylo Ren’s disinterest quickly turns into something much darker. When Rey wakes up after being taken from Takodana, Kylo Ren assures her that he can take whatever he wants from her. He’s confident in his Force abilities, carrying a false sense of superiority while issuing a threat akin to sexual violence. Countless women are met with similar threats when they become active in communities that are “protected” by gatekeepers. The stifling harassment often pairs with negative, gendered slurs and threats of sexual violence.

Presumably, after learning of her Force sensitivity, he no longer wants Rey dead. In their fight following his murder of Han Solo, Kylo manages to push Rey to the edge of a cliff, stopping just before he knocks her to a certain death. He offers Rey a teacher to help her understand her abilities. “Don’t you dare,” I whispered. “Don’t you dare mansplain the Force to her.”

At the end of The Force Awakens, Hux is dragging Kylo back to Snoke to complete his training. It’s to the chagrin of some critics that Kylo Ren never comes off as commanding or authoritative as past Star Wars villains, and I’ve seen more than one describe him as “sniveling.” Both are true, and I’d add petulant and obsessive, too. But the real villains of the world aren’t often clear cut tyrants like Palpatine or greasy crimelords like Jabba — sometimes they look distinctly more like Adam Driver.

Hale Goetz is a 20-something Chicago suburbanite and D&D enthusiast. As a newbie freelancer and blogger, she writes about feminism, identity, and guilty pleasures.