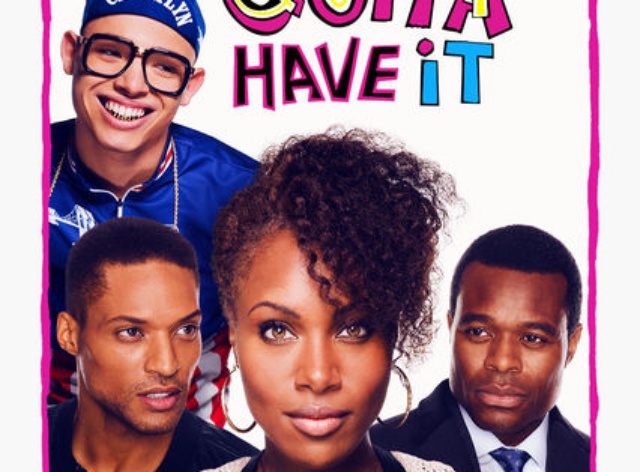 This holiday I binge-watched She’s Gotta Have It in two days, not only because it was fun, but watching it was such a lovely tribute to black female artistry that it warmed even the darkest cockles of my heart. Nola Darling, a dark-skinned, vivacious black artist was such a refreshing character for me because so often, when we see “cool-alternative-blackness” depicted, it’s overwhelmingly lighter-skinned black actresses, mainly Zoe Kravitz. That isn’t shade; I’m just saying.

It’s been refreshing seeing the show tackle issues like street harassment and gentrification, and explore alternative sexual/romantic relationships. (Insecure covered similar ground this season with Molly and her childhood friend-turned-bae, Dro.) When I first watched the trailer for She’s Gotta Have It, the aspect of Nola’s character I was most interested in was the part where she calls herself a “polyamorous pansexual.” How would this series tackle Nola as a queer black woman? Well, let’s discuss.

In episode four “#LuvIzLuv (SEXUALITY IS FLUID),” we are introduced to Nola’s female partner, Opal Gilstrap, played by Ilfenesh Hadera, and wow she is not only accomplished, smart, and emotionally mature, but she is drop dead gorgeous. From the moment you see her and Nola interact, the chemistry is off the charts, and you instantly see how Opal “gets” Nola better than her male partners: Greer, Jamie, and Mars (although if I had to pick a dude, it would be Mars). As Nola herself tells Opal, “You are so dope.”

Opal is a lesbian, a mother, and someone who Nola doesn’t feel is trying to control or break her. In therapy, Nola talks about how, with Opal, there’s none of the possessive drama that she finds with her male partners. There is a peace; there is an acceptance of no one is trying to change her, break her, or mold her into a form other than her own. With Opal, we get some of Nola’s most emotional romantic scenes, and when they do “break up,” it has nothing to do with Opal wanting Nola to be anything, but the fact that Nola forgot a promise made to Skylar, Opal’s daughter.

Yet, the way Opal is introduced and framed within the show is … odd. For starters, she makes her appearance four episodes in, after we have spent so much time developing her relationships with those men. In the third episode, Nola buys an LBD (little black dress) that all the men in her life react to in hyper-sexualized, masculine ways that turn Nola off. Nola bought the dress to show ownership over herself, and instead, the men in her world just want to own her in it.

As a result, she decides to take a cleanse from dick, but that doesn’t mean sex. That’s when Opal is introduced. Now, I don’t know whether any of the writers involved in this project are queer, and I’m not speaking for anyone else’s actual, lived-in queerness, which is complex and layered and an actual human experience. However, from a fictional, writing perspective, it’s not a good look to make Nola start dating Opal because she’s cleansing herself from toxic dick. And once she and Opal are no longer together, she’s back with the dudes. In fact, she’s never sleeping with the three dudes and Opal at the same time. Their places in her life are totally separate.

Female sexual relationships are not about hating men or not being into men at that moment; they’re about being into women. As a bisexual woman, one of the things you will hear about us is that we date women, but only get into relationships with men. It is biphobic as hell and acts as though bisexual/pansexuality/etc. is a numbers game. Yet when things like this happen in television shows, they play into it.

Plus, the relationship with Opal is the only place where Nola’s queerness is on display. She even very ignorantly, in my opinion, tells a black, gay male friend that he should “just come out” to his Trini-parents, with all of the caviler attitude of a painfully straight person. Even with the free-spirit artist parents Nola had, coming out must have been an intense experience. It always kind of is. But is Nola “out”? The impact of her pansexuality on her life is never an issue because, beyond Opal, her sexual relationships all come attached with cis dudes. In fact, the audience doesn’t learn Nola’s interested in women until Opal’s first appearance.

Despite having less screen time than the dudes, Opal’s place in Nola’s life seems powerful. When she’s arrested, it’s Opal she calls. Opal is the only person she invites to her art gallery. Opal is the only one of her lovers that Nola considered committing to out of her own free will. So why isn’t Opal on the poster? Why doesn’t she have a bigger role in the story? Why don’t we spend more time with her and her world, since she means that much to Nola?

This isn’t to say that I find the relationship bad, but I feel like there was so much more to be explored that was pushed aside for Nola to be with, frankly, inferior dudes. There’s so much I appreciate about the show, in particular showing a black woman going to therapy and learning from it, dealing with sexual trauma, body issues, and class. The show is filled with so many incredible female characters and storylines that I’m looking forward to revisiting when and if there is a season two. Also, make sure there are some black queer female writers.

So I guess all I’m asking for is more Opal and Nola next season. Replace one of the dudes with her—preferably Jamie. Hard swerve on that one.