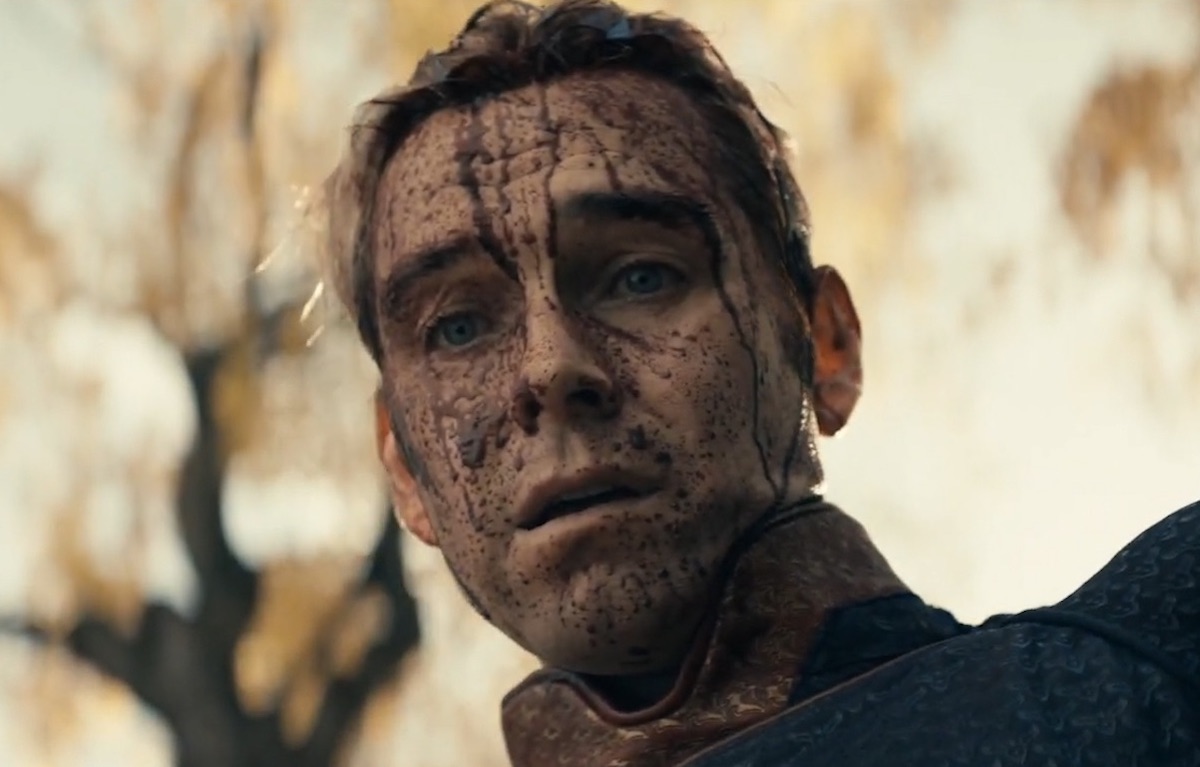 **Major spoilers for the season two finale of The Boys***

Holy crap. That was my stream of thought on a loop throughout last night’s season finale of The Boys, which brought its trademark drama, humor, pathos, and actual head-exploding violence to a fantastic finish. But even after all the main action seemed settled, The Boys had one more twist in store—and it was a hell of a reveal. It’s also an interesting choice for the show, to say the least. Let’s whoosh right in.

A lot happened in the finale, which was both fraught and nail-biting, and also extremely cathartic (“the girls” taking on Stormfront will live rent-free in my head forever). One of my favorite elements about The Boys is that while it can seem to be going in predictable plot directions, you never quite know how they will pan out, and the show loves nothing more than a hard turn out of left field. For example, I was pretty sure that Becca was going to die, but did I expect her to die because of Ryan’s power? Nope!

The series’ ability to keep you guessing, and to make you keep yelling “Holy crap!” at the screen when something just absolutely batshit goes down, is one of its primary strengths. The other is actor Antony Starr, who plays Homelander, and who is just extraordinary. Starr’s ability to be smarmy, evil, balls-to-the-wall homicidally unhinged, all the while smiling that All-American smile, and sometimes even making you feel bad for the lab-raised “hero,” is a superpower unto itself. The entire cast of The Boys is fantastic, but Starr really sells the piece, and his performance after Homelander lost his son and found what was left of Stormfront was a tour de force in the finale. As was his, erm, final performance that we saw.

Neuman, a “wunderkind” young politician, has been an obvious homage to New York’s own wunderkind Congresswoman Alexandria Ocasio-Cortez since her introduction. She’s visually styled after AOC, appeared to be on the side of social justice and taking a stance against Vought’s corporate overreach, and is said to have a similar social media presence (a popular dance video is mentioned). Neuman even represents Queens, as does AOC, and Neuman’s district is the 4th (AOC’s? The 14th).

We thought Neuman was one of the few good guys we’ve seen in a position of power on a show that’s often unabashedly left-wing in its slant and loudly decries the corruption of the U.S. government and how frequently it is in bed with big money.

And then came that twist. After ending the phone call—in which Neuman uncharacteristically promised to help expedite the Church’s tax-exempt status in return for more dirt on several Supes—BLAMMO! Adana’s head suddenly explodes in the head-explodey style The Boys has mastered. The camera pans to Neuman standing outside his office, her eyes gone silver-colored for a moment.

Victoria Neuman is not only a secret Supe herself, but she’s apparently a bad guy. A really bad guy, since it would appear that she was also behind the “superterrorist” attack on the Congressional hearing, which killed several Congresspeople and observers, including Neuman’s own chief of staff. (She likely also blew up the deputy CIA director’s head at a different juncture). And now, due in large part to her maneuverings, she’s ended up as the powerful chairwoman of a committee that will oversee superheroes. She’s vastly more influential because of the apparent terrorist attacks she perpetrated. Victoria Neuman is positioned to be the next big supervillain on The Boys.

Of course, like anything else on The Boys, we have no idea how this will play out, but it’s clear that Neuman will have a significant role. The episode ends with Hughie going to work for her (I guess that chief of staff role might be open), which will likely be a big plot hinge in season three.

While many TV-watchers like me were shocked at the Neuman twist, fans of The Boys comics series may have been expecting something about Victoria to give. In the comics, the character Victor Neuman is a former CEO of Vought and then the U.S. Vice President, a man who is “incredibly simple-minded and perverted, but is easy to manipulate, which makes him an ideal puppet for Vought.” Writer Garth Ennis has said that Victor Neuman was intended as a parody of George W. Bush.

Victoria Neuman is clearly a different kind of character personality and politics-wise, but the choice to give her this name would have signaled to comics readers that they should keep an eye on her. Does it also mean that she could retain other qualities of Victor Neuman? Was she a Vought spy all along, or has she set these events in motion entirely for her own ends? Is she set to become Vice President, and then President one day? Questions abound.

Although I usually adore the way that The Boys so artfully skewers our current political divides, I also have to pause at the fact that the stand-in for Alexandria Ocasio-Cortez is revealed to be a ruthless villain. That is a … choice, especially for a show on Amazon, a megacorporation that Ocasio-Cortez has taken on much in the same way that Neumann goes after Vought. She’s largely thought to have impacted Amazon’s decision not to build a campus in Queens, after she pushed back against the company’s proposed $3bn in tax breaks for the project, amongst other criticisms.

For Victoria Neuman, and all the humane, judicious, leftist politicking she represented on The Boys to be revealed as a cold-blooded murderer and potentially next season’s supervillain is a lot to process. The show has lambasted the hypocrisies of right-wing and alt-right ideologies so excellently that it’s not out of bounds to imagine that they intend to explore how other ideologies can be wielded as well. But to take such pains to render Neuman as an AOC carbon-copy and then make her the bad guy on one of Amazon’s flagship shows feels a bit too inside baseball to me.

All this aside, I’ve loved The Boys this season, and I enjoyed the hell out of the season finale. There is no series on television right now that better depicts the vast faultlines within this country and the utterly exhausting, head-exploding day-to-day experience of being an American. I’m hoping that our expectations for what the show may have in store are upended, as they’ve excelled at doing so often before. Hughie, please be careful. And let’s get Antony Starr that Emmy.