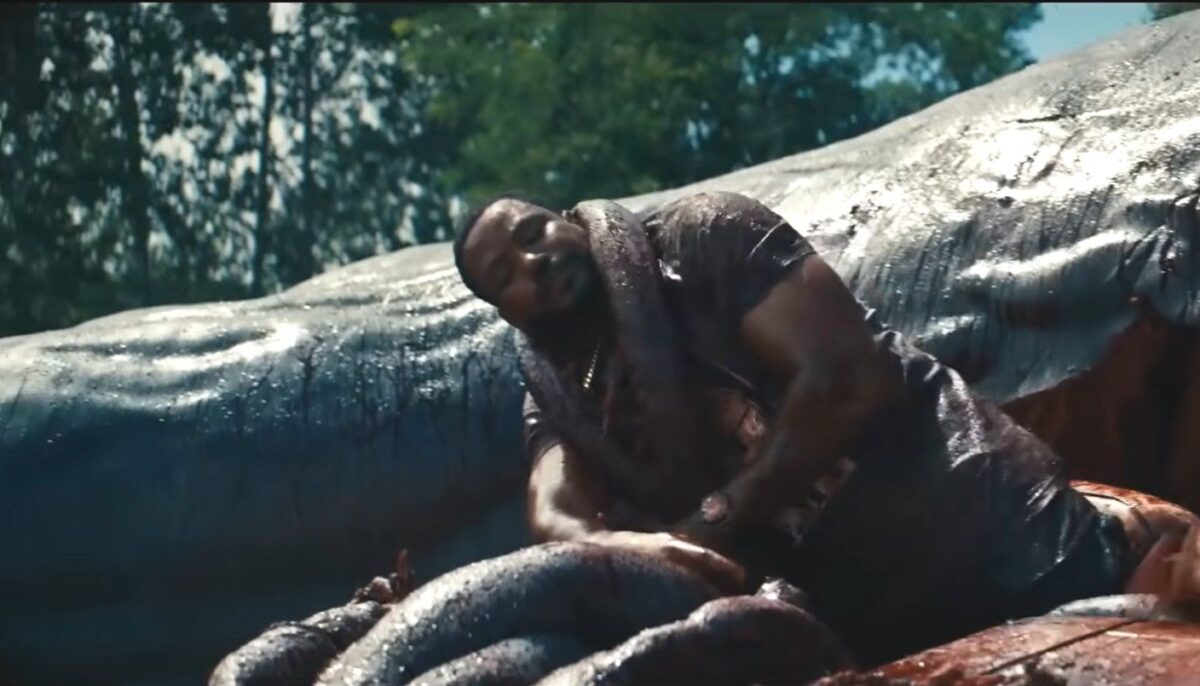 The most completely bonkers moment of The Boys season two arrives near the end of episode three. Rather than surrender to The Deep and his band of aquatic mammal that have assembled to stop them, the titular boys, led by Billy Butcher, ram their boat at top speed into the side of a beached whale. Once the whale is dead and the crew crawls out of the viscera, poor Hughie, who’s already been clinging onto the last threads of his will to live for days, remains stuck in the literal belly of the beast as he has a complete existential crisis.

It’s a wildly over-the-top scene, so I had to talk to the cast and creator of The Boys all about it. Amazingly, this scene almost didn’t happen according to Eric Kripke.

But getting there took a lot of work, first in terms of the production that had to build Lucy, the whale. “Once it’s beached, Irv Greywall, our production designer, said ‘we’re really going to have to build that whale.’ So we really built an eleven foot tall, fifty-foot wide puppet.”

And it was incredibly impressive to the cast. “You turn up and yeah, there’s this giant prosthetic whale that has a moving eye and a moving mouth,” said Antony Starr, who plays Homelander. “And it blows water out its spout and the tail moves … it’s an amazing real thing there.”

Aya Cash, who plays Stormfront, was also impressed. “It’s always fun when the crazy big props show up on set, because in these kinds of shows there’s often a lot of CGI,” said Cash, who wasn’t the only one to note how cool it was to have so many practical effects. “It’s really fun when they actually put the props in front of you. To show up and see that big whale was a complete thrill. Like … it’s artists. I can’t believe that they built this thing.”

According to Karl Urban: “Eric Kripke came to us at the beginning of the season and said ‘listen we’re not gonna try and top season one, that would be a mistake, we’re not gonna try and go bigger, we’re just gonna go deeper, and really develop these characters and throw them into situations that are going to challenge them.'” And boy did he—taking the “going deep” very literally. Urban added: “[Kripke] did that and he also managed to go bigger than season one”

But getting to the whale in reality was scary too. I mean, of course, the bonkers speed boat scenes that apparently were tougher on most of the cast than the whale itself. Kripke revealed: “That’s really Karl really driving a speed boat on the water because he’s a Kiwi and he’s all about boats and fishing. He’s really comfortable on the water but no one else in that boat was. I think they were truly, truly terrified.”

Urban doesn’t dispute that. “Jack Quaid now has a lifelong fear of boats after that,” Urban chuckled. “We had a safety word if he ever felt uncomfortable—he was just supposed to yell ‘Karl!'” But it didn’t quite work. “We start going along and apparently he’s yelling ‘Karl! Karl! Karl!’ but I can’t hear it because of the noise of the helicopter. And I remember [after the first run] looking at Jack and he is white as a sheet. He was in fear of his mortal life.”

So, that sounds bracing. But what was it like actually inside that whale? Not pleasant.

“We were like babies jammed inside of a womb in that scene,” Urban explained with laughter. “But let me tell ya that was a lot of fun, in so much as it wasn’t really. It was quite uncomfortable. It was like 90 degrees outside, inside the whale was like 120.” And poor Laz Alonso had it the worst, according to Urban. “You find your self in situations that you have never been in before and you hear things that you never have heard before and I remember we were in [the whale] and Laz is just getting more and more agitated and hotter and hotter. And started yelling: ‘Can we get some AC in the Whale?!’ ‘We need some AC in the whale!'”

Urban went on: “To his credit, it was promised to us by the first AD that they designed this whale with AC. But on the day they found that the attachment to get the AC into the whale wasn’t working … it wouldn’t fit. So we were dying in there.” Eric Kripke confirmed: “It’s sticky and hot and just super gross and there’s bees and flies and it’s a mess on that beach.” He added, “But I think the proof is in the results.”

It really is, even though it sounded unbelievable on paper. “I remember reading the script with the whale scene,” said Starr, “And thinking ‘they’ve pushed it too far this time, we’re not jumping the shark we’re jumping the whale. And it’s now my favorite scene of season two.” Thanks to so many amazing artisans and crew members behind the scenes, that big whale on the beach “becomes this incredible sequence that is hilarious.”

And everything about the whale, from the over-the-top aspect of it to the deep, dark emotions it plays into, exemplifies The Boys.

“It’s a show that’s quite unique in the regard that it can within the blink of an eye oscillate from talking about penis piercing to white supremacy,” Urban explained. “There’s no other show quite like it. I never thought that I would end up in my career shooting a scene in the carcass of a dead whale with a speed boat rammed into it.”

But he did, and we’re so glad for it.