The Boys Is a Subversive, Profane, and Surprisingly Feminist Delight

There are a lot of superhero shows and movies out there—like … A LOT—but somehow, creators still find ways to spin the well-worn tropes into something new. Superheroes are our new mythology, a shared language of idols and stories that writers can twist and spin into a hundred different variations to explore our world and our humanity. Whether it’s Doom Patrol using the genre as an exploration of trauma and recovery or Supergirl tackling our fraught political landscape, super-shows haven’t run out of stories to tell, and that’s true for The Boys, as well. Amazon Prime Video’s new series, from Supernatural creator Eric Kripke, is yet another riff on the superhero mythos, this time from a seriously subversive, anti-corporate, and shockingly feminist perspective.

The Boys imagines a world where superheroes—a.k.a. “supes”—are real … but they’re jerks. It’s a world that’s not far at all from our own, in terms of how the heroes are corporate products controlled by PR professionals, beholden to their polling numbers and how often they trend on Twitter.

Imagine if Marvel studios was still making Avengers movies, toys and lunchboxes, just Cap and Ironman were real people who might actually save you from a falling piece of rubble. Now imagine how dangerous those people would be. Corporate-controlled celebrities high on their own supply are bad enough, but imagine if they had laser eyes or could run fast enough to explode your girlfriend in a top-speed collision. That’s how The Boys starts. While I’m low-key annoyed to see Kripke start yet another series with a dead woman, he’s working from Garth Ennis’ comic of the same name, and it is a shocking (and gross) moment that sets the tone and propels the story of the entire series.

That dead girlfriend is Robin (Jess Salgueiro), the love of Hughie Campbell (Jack Quaid). When she’s exploded by Flash-type speedster A-Train (Jesse T. Usher), Hughie is broken and traumatized. That makes him the perfect target for Butcher (Karl Urban), the leader of a band of lowlifes and other supe-victims who aim to take down the Supes. Hughie joins Butcher and his band in a sort of guerrilla war against the supes, and it leads to laughs, screams, and explosive shocks.

Hughie’s story is a great mix of action, inept spy work, and psychological trauma, and watching “The Boys” themselves come together and take the supes down a peg is surprisingly fun. All the characters on both sides exist deep in moral grey areas, but the performances—particularly Urban’s scenery-chewing, devil-may-care bravado—keep you rooting for the Boys.

But that’s, luckily, only half of what’s going on.

What was really pleasantly surprising to me was how feminist this show is, especially for something called The Boys and featuring a character known simply as “the Female.” Parallel to Hughie’s story, we see the journey of a young female hero known as Starlight (Erin Moriarty). Starlight is a bush-league hero working under the watchful eye of the show’s equivalent of a stage mom in Ohio, who joins the big time as a new member of “The Seven.” 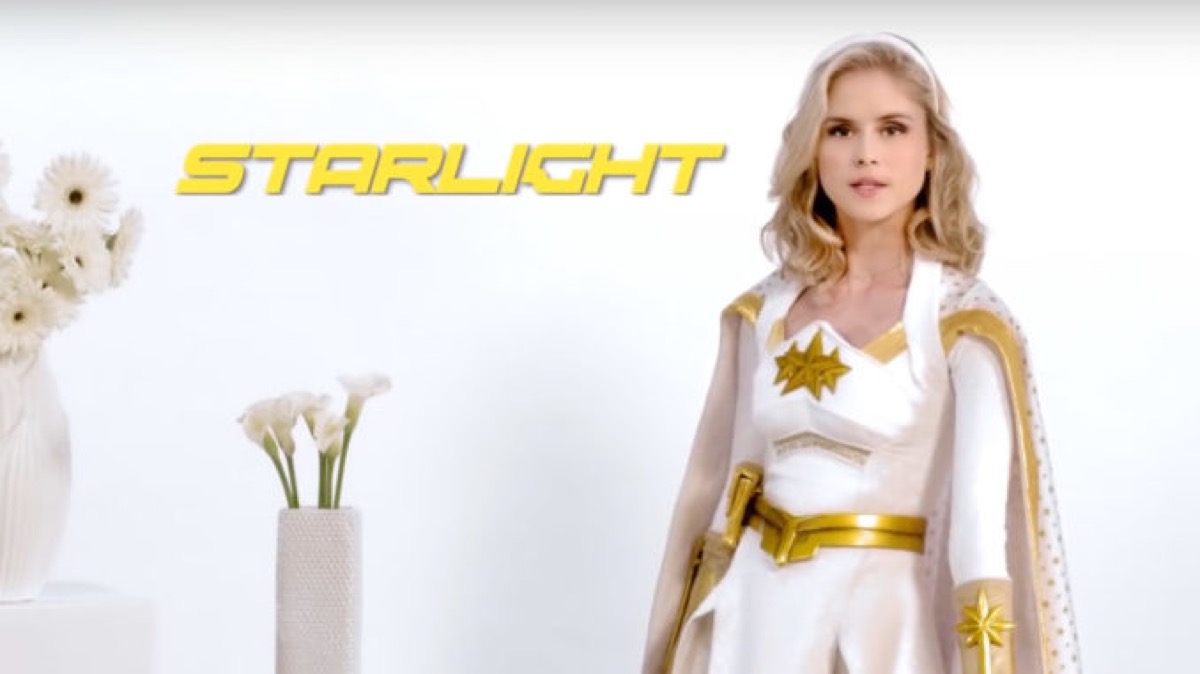 The Seven are the show’s version of the Avengers or Justice League, and they’re the very top of the supe-pyramid. All Starlight wants to do is help people, but she quickly learns that the Seven are merely employees of a far more powerful corporation, and they’re also … jerks. A-Train is one of the Seven, and we know he killed a woman by accident, but the real piece of work is The Deep (Chance Crawford), an Aquaman knockoff whose only friends are porpoises because he’s such a douchebag. His skeeziness leads to a serious #MeToo moment for Starlight that alters her whole worldview, but also serves as a blistering indictment of male power and entitlement.

At the San Diego Comic-Con press conference, I asked about the feminist elements of the show, and Eric Kripke smartly deferred to Erin Moriarty to answer. Moriarty agreed: “When you’re sent a script that’s called The Boys, you kind of make an assumption about it, especially one that’s centered around superheroes,” and the same went for her first assumptions of Starlight, that “she was just going to fit into that box that we’re all really familiar with, and she doesn’t. And that’s what I loved about it.”

Moriarty went on to summarize Starlight’s arc: “You first meet this very earnest young woman from Midwest America … and then she’s smacked in the face with reality, and it turns into a really morally ambiguous situation.” Luckily, Starlight takes it as an opportunity to be a hero in a different way. “Good people can make bad decisions in the moment,” Moriarty explained, “and she ends up kind of becoming empowered as a result.”

There’s other elements of The Boys that have that same ethos. Not all the supes are jerks or evil, and the ones who do evil may have complex reasons for doing it. Homelander (Anthony Starr), the leader of the Seven (who’s sort of a cross between Captain America and Superman), doesn’t get up to the same perverse shenanigans as other supes, but he might be the scariest of them all, because he believes in his own greatness.

He also feels a rather terrifying need to protect a woman that doesn’t need protecting. That woman is Elizabeth Shue as Madeline Stillwell, the corporate boss of the Seven and the real power behind their thrones. She’s a great character, just as morally ambiguous as the rest, and I have to say, the plot point that sees her pumping breastmilk at work—onscreen!—was actually amazing. 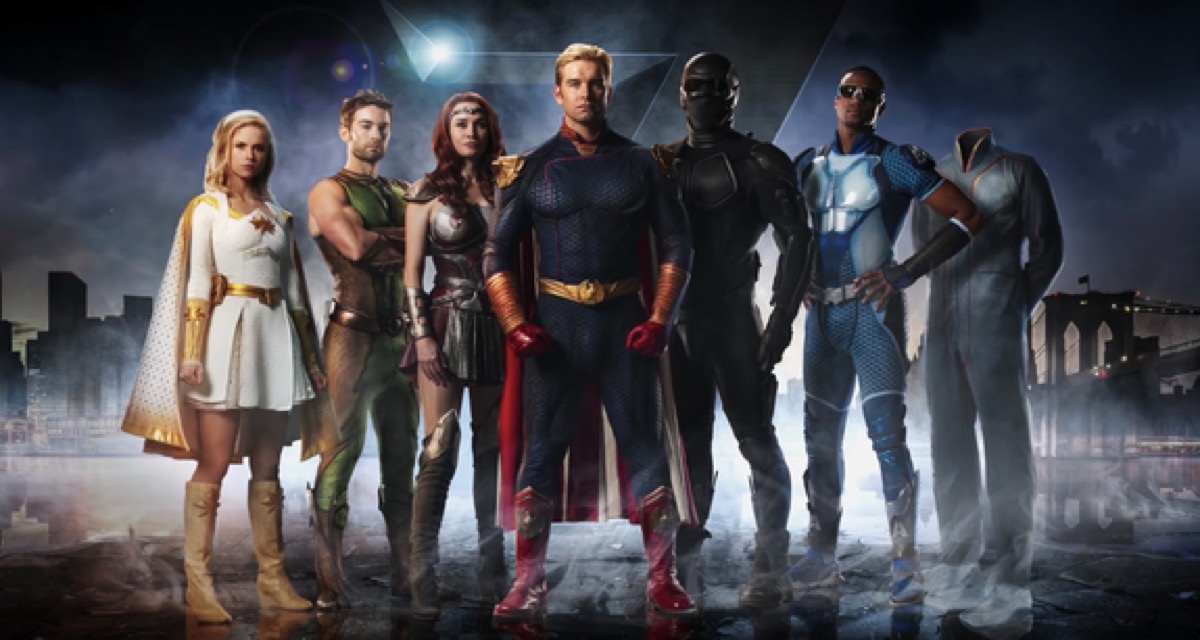 There’s a lot onscreen in The Boys that I’ve never seen before, some of it hysterical, some of it disgusting, and much of it both at the same time. Kripke shared that Amazon gave them an “incredible amount of creative freedom” to make their “strange, perverted show,” and that’s evident in every frame. It’s bitingly anti-corporate, anti-celebrity, and anti-establishment. Much like Supernatural, it’s about blue-collar folks standing up to an unimaginably huge threat and fighting it as best they can.

There’s a certain level of irony that this show is airing on Amazon, a company with a media empire just as sprawling as the sinister Vought Industries on the show, but it’s also great that this sort of show is even out there. The Boys is certainly not for everybody. It’s shocking and crude, but it’s profane for a reason and outrageous because it actually has something to say about those in power and the heroes we worship. It’s crazy, but it’s also a hell of a lot of fun.

Season one of The Boys lands on Amazon Prime Video on July 26.