Laika Delivers Yet Another Stop-Motion Masterpiece with The Boxtrolls 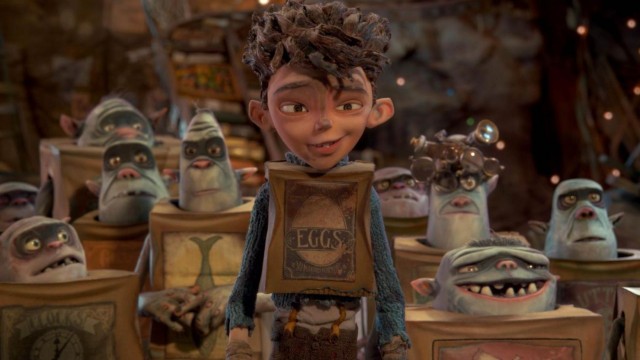 I was nervous going into The Boxtrolls. Real nervous. See, in 2012 Laika put out ParaNorman, which is in my top five animated films of all time. It’s hard to overstate how much I love this movie. I love how it looks, I love the acting, I love how it features both complex examination of social issues (specifically, bullying) and the line “I think that statue just pissed at us.” It can be tough for me to keep my expectations at a manageable level, and for Boxtrolls I just was not able to do it. “This is the studio that put out Coraline,” I said to myself, “which means The Boxtrolls will probably be excellent. But in being so sure of that, the laws of the universe dictate that it will only be mediocre. Quid pro quo.”

The laws of the universe took a hike for this one, though. That or Laika’s somehow tapped into some sort of deeper, elemental power. Because I am happy to report that, yes, The Boxtrolls is as good as you think it will be.

Worry not, for this review is spoiler-free.

The premise of the film is that a young boy named Egg (Game of Thrones‘ Isaac Hempstead Wright) was adopted by a band of subterranean creatures named Boxtrolls when he was a baby. The Boxtrolls are giant sweethearts, but thanks in large part to the villainous Archibald Snatcher (Ben Kingsley), everybody thinks they’re evil monsters who need to be, well… snatched and locked up. As the Boxtroll population dwindles, Egg reaches a point where he has to take action to save his adopted family, enlisting the help of Winnie (Elle Fanning), a young girl with blonde hair and frilly pink dresses who happens to be exceedingly, delightfully morbid. (Upon meeting Egg, she excitedly asks whether the Boxtrolls butchered his parents and “let you watch… I mean, made you watch?”)

As you might guess, a running theme in The Boxtrolls is that prejudice is bad–you shouldn’t condemn people you don’t even know for what you’ve been told is true about them. But that’s not all Laika’s getting at here, the same way ParaNorman didn’t just say “bullying is bad” and take it no further. Prejudice and bullying are bad, of course, and those are lessons that it’s good for children’s movies in particular to include. But both movies delve deeper—ParaNorman, for example, got into the psychology of the bully, how it’s not right to perpetuate a cycle of violence by lashing out at those who have harmed you because of their own issues. Kids pick up on that stuff, and not bashing its audience over the head with “BULLYING IS BAD, BULLYING IS BAD, BULLYING IS BAD” helped elevate ParaNorman into that highest echelon of kid’s movies: Ones that are just as entertaining for adults as for children.

The Boxtrolls got in on the social commentary action as well. It’s big into self-determination, but not in a gross Ayn Rand way. Instead, the movie teaches that you have the power to determine what sort of person you are. Not your family, not society, not people who dislike you for whatever reason. If you want to be a hero, you can be a hero, even if everyone’s telling you you’re a monster. There’s a great running gag where two of Snatcher’s minions, who are the textbook definition of evil henchmen, genuinely think they are fighting for the side of great justice. I’m paraphrasing, because I don’t remember exactly, but at one point when they’re hunting down Boxtrolls they stop to ponder whether “this doesn’t seem like the sort of thing a villain might do?” The Boxtrolls themselves are exceedingly timid creatures, taught by a society that hates them that they should avoid confrontation. Everyone has a moment where they have to decide who they are.

The bad side of this whole self-determination thing is in baddie Snatcher, who’s obsessed with moving up the social ladder and becoming one of the White Hats, or the elite of the town of Cheesebridge. [“White Hats”? See: the minions thinking they’re the good guys. I see what you did there, Boxtrolls.] He’s convinced that being a White Hat will give him worth and make people respect him, and he sees in the destruction of the dreaded Boxtrolls—the myth of whose evilness he’s been key on perpetuating—his ticket to achieving that.

To vague up my language so as not to spoil people–The Boxtrolls shows us a hero, Egg, who becomes a better version of himself (braver, willing to stand up to injustice, etc.) because he thinks it’s the right thing to do. Having done that, the movie posits, society will see the error of its ways and admire him. Snatcher, meanwhile, lets what society defines as success drive his actions. He lets other people determine what he should be, and… well, he’s the bad guy. It doesn’t turn him into a good person.

Change comes from within. Don’t let people tell you who you are. You are empowered to make changes in your own life. It’s a good message (if one that isn’t always so cut-and-dried in the real world, but hey, optimistic kid’s movie) and one that’s presented in a remarkably complex way.

Also: There are a lot of cheese puns in this movie.

So, so many cheese puns.

You know how I feel about puns. Keep your ear peeled for a “curds and whey” joke–it is hands down the loudest I’ve laughed at a movie so far this year.

Visually, The Boxtrolls is gorgeous, as I expect Laika movies to be. It’s set in an era reminiscent of Victorian London, but I was surprised by how gritty and grimy it’s not. The characters have these red and blue tones in their faces that really make the movie shine.

The only problem I did have with The Boxtrolls is that it hits very hard on the theme of family—specifically that you can choose your own family, just as you choose your own identity, which ties in with that promo we loved so very much—with a specific, Peter Pan-type emphasis on the relationship between fathers and children. That’s not a bad thing. But moms get totally sidelined. Which is fine–I’m not interested in stamping my foot and saying “But Laika, why didn’t you make the exact movie I wanted you to make?” You want to make a movie about fathers, you make a movie about fathers.

But it was a little weird that you have Toni Collette voicing Winnie’s mother, and she gets fairly high billing considering the fact that she’s barely in the film. Winnie and Egg have discussions about fathers, how they should always be there to listen to and look after their children. It’s really poignant, because neither of their father’s do, Egg’s because he’s out of the picture and Winnie’s because he’s obsessed with cheese. But… Winnie, you have a second parent. No mention of that? Ever? “I wish my father expressed any interest in my life… or my mom, I guess that would be nice too.” Given how important the idea of family is to the film as a whole, the omission struck me as a little odd.  With how unimportant Winnie’s mother is to the film, she might as well have been cut out. What kid in an animated movie has two parents, anyway?

That relatively minor issue aside, The Boxtrolls is a thoroughly enjoyable movie that I already have plans to see a second time.  I saw it in 3D, and the effects were good—there are no cheesy (har har) “This box is flying at your face, look at our VFX budget!” moments that I can recall. Go down to two dimensions, and you’ll still be seeing an amazing film.

Oh. And stay after the credits. All of them, Marvel Cinematic Universe-style. That’s a tip from me to you.