The Best Reactions to Trump’s Threat of Nuclear War, Which Is a Headline I Hoped Never to Write 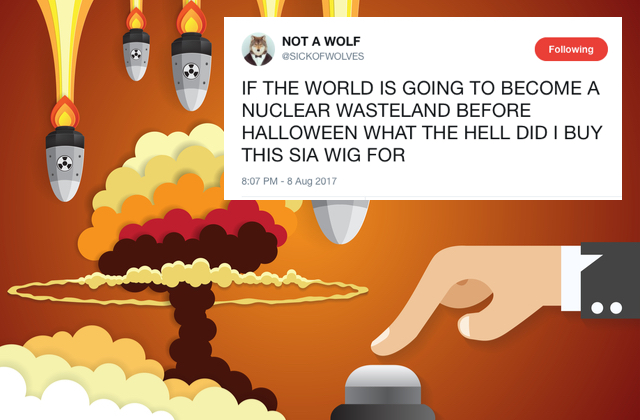 It’s felt surreal to be online in the last 48 hours, as Donald Trump’s saber-rattling braggadocio became uncomfortably real after he threatened North Korea with “fire and fury like the world has never seen,” and oh God, we’re all going to die and it may not even be hyperbole anymore?

After Trump—speaking from his “working vacation” at his golf club in New Jersey—told a reporter that North Korea’s escalating belligerence just might cause him to rain down total destruction and ignite the end of days (take that, Robert Mueller!! No one can talk about Russia if no one is around to talk! Or if there is no Russia), Twitter went into a sort of meltdown. (I can’t believe just a few days ago I was suggesting that Trump’s extended vacation might be relaxing for us all. None of us will sleep again, ever.)

A good many of the Internet’s responses attempted to make light of the situation, but it’s kind of hard to laugh about the suddenly real possibility of a nuclear holocaust. A lot of humor fell sadly flat, like the settling radioactive dust of a mushroom cloud. Other Tweets laid the blame squarely where it was due—on our impetuous, ignorant, bombastic (sorry, too soon?) joke of a President.

It’s harder to laugh at Trump right now than it is about the suddenly real possibility of a nuclear holocaust because he’s the one who holds the ability to start it in his curiously undersized hands. He was probably going for that reaction, too—who’s laughing now, punks??? You laughin’ at me, the guy with the nuclear football?

Say what you want about Obama, but I never once worried about a damned nuclear war…

Not even once! Imagine that!

I can’t think of anything more 2017-esque than being off Twitter for 8 hours and coming back to “Nuclear War” trending.

Just to restate, disliking nuclear war makes you a liberal. Everyone clear on that? https://t.co/5gPmFb1knZ

I remember a time where you could go to bed without worrying about what the president might do to start a nuclear war before morning.

You can? I don’t remember that time. That’s the before-time.

Anyone that ever said, there is no difference between HRC and Trump should be ignored forever. pic.twitter.com/ZWB9TpjNwe

I’m already ignoring those people. What took you so long?

I was going to try drinking less coffee, but it’s 10 am, and I’ve already had 32 ounces, because, like, nuclear war

There’s a lot of Tweets about people indulging in this or that because hey, we might all soon be but shadows burned into a wall. I don’t understand why anyone would be trying to drink less coffee, though. Coffee is one of the few comforts we have. For now.

Trump has taken us to the brink of nuclear war. Does he know when to stop? https://t.co/uCc8bkBtgR

Ask a stupid question, The Guardian …

Whew. Good thing we didn’t elect the candidate who was “threatening escalation with North Korea” & hurtling us towards nuclear war/WW3… 😑 pic.twitter.com/aHvhzOOGOC

One of the more rage-inducing parts of all of this: the resurfacing of all the careless reporting and messaging about how Trump was a “Dove” to Hillary Clinton’s “Hawk”.

The part of my brain that is saying “there won’t be a nuclear war” is the same part that was saying “he can’t really win.” on election night

FOX: But Her Emails

:face laughing with escalating hysteria until it breaks out into choking sobs emoji:

We’re closer to a nuclear war than we’ve been in 55 years because guys wanted to jail a woman for using email.

:face darkening with rage and curling up claws into furious attack formation emoji:

John Kelly is a general, and came in as chief supposedly to bring restraint to the White House. The president just threatened nuclear war.

So I guess Kelly hasn’t succeeded in making Trump “pivot” to acting like a goddamned President? Or, IDK, maybe it’s not best to be surrounded at all hours by men whose entire lives have been steeped in war?

So, for the pool, who had 6 months, 2 weeks and 5 days for Nuclear War Escalation?

Honestly, I’m a little surprised it took this long.

I wonder how the white working class feels about nuclear war

You know what would reduce the threat of nuclear war with North Korea? A fully-staffed State Department that actually cared about diplomacy.

It’s unbelieveable how many basic diplomatic norms have been abandoned under Trump. Sorry, let me amend that. It’s believable and execrable.

With polls now worse than before
Trump thinks to even the score
“Grand jury? Indictment?
I’ll show you excitement!
How ’bout a nuclear war?”

Appearing to respond to Trump, #NorthKorea threatens to “turn US mainland into the theater of a nuclear war” if detects “sign” of US attack

Diplomacy 101: Don’t escalate when both sides are led by irrational, posturing, insecure men with no history of demonstrating any value for human life.

I can! After 2017 I believe that anything is possible.

OK so if I understand this, dark skinned immigrants are an existential threat to the United States but nuclear war is no big deal.

These Tweets should be printed together in the book “The Trump Year: A History,” but hahaha what am I even talking about we won’t have the capacity to print books or study history in the post-apocalypse.

*goes to enter Netflix password on ipad, it slips- shatters*

Aw yeah, a Time Enough At Last reference! Where my Twilight Zone nerds at? We can finally cosplay this one for reals!

Overheard at the WH: I’m pretty sure POTUS won’t start a nuclear war – it would be bad for his property investments.

“How did the Nukey War start, Oldfather?”

“Well …” [I stoke the fire] “It was Hashtag International Cat Day…”

This is the only real laugh I’ve had throughout this entire extremely trying Twitter time.

There’s an old Trump tweet for literally everything. Even nuclear war.