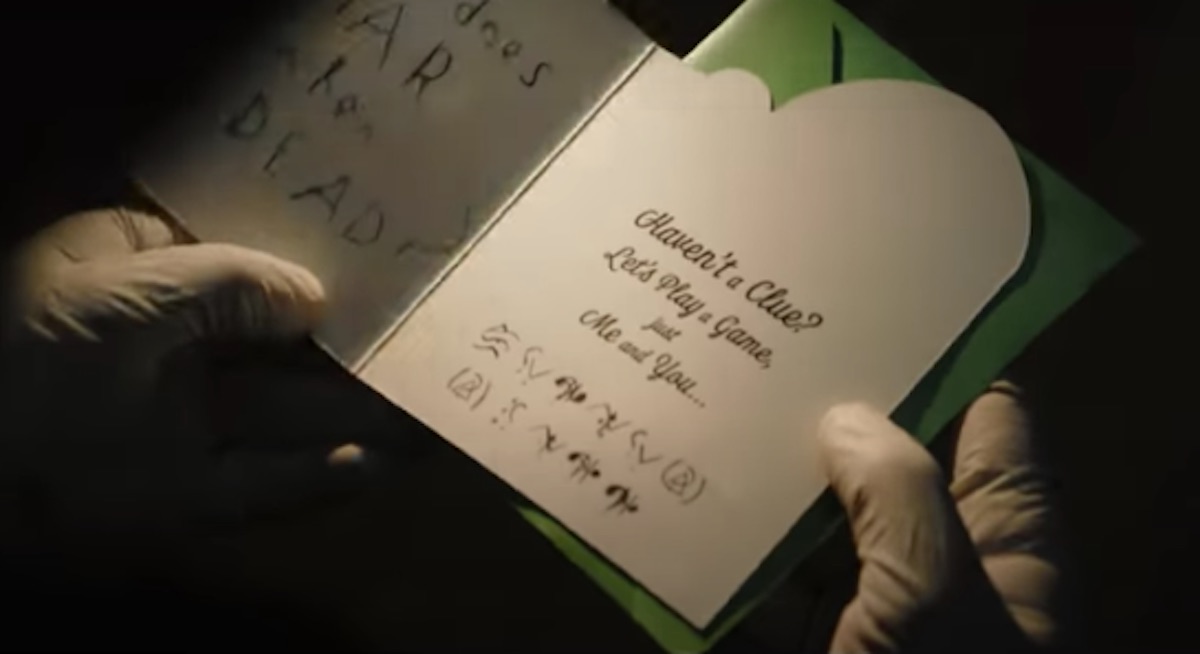 The first look at Matt Reeves’ broody young Batflick dropped at DC FanDome over the weekend. Some of us who were still in shrug-mode about The Batman were won over by its dark aesthetics, killer cast, promises of angst and action, and Robert Pattinson in smudgy eye makeup. I knew they had me when Nirvana’s classic “Something In The Way” kicked up in the background.

The trailer is riddled (sorry) with blood-red messages that say things like “NO MORE LIES” or simply “LIES” and mysterious communiques left for “the Batman” from “your secret friend.” In one scene, Jim “Not Commissioner Just Yet” Gordon (Jeffrey Wright) holds a greeting card that reads, “What does a liar do when he’s dead?” followed by a series of symbols. An intrepid fan on Twitter has now decoded the Riddler’s message.

Andrew Lane showed that the answer to “What does a liar do when he’s dead?” was a winking pun: “He lies still.”

So hyped for Matt Reeve’s Batman Movie, I decided to solve The Riddler’s code. #TheBatman pic.twitter.com/vsxVxucedv

Asked to explain how he’d done it, Lane went through his process.

letters to figure out the rest. The answer to the riddle is “He Lies Still”. This is a double entendre, because he is literally lying still due to death and also continues to lie after death.

That is the exact method that I used! You explained it much better. Thank you!

And of course, since this is the Riddler we’re talking about, it seems like there may have been even more meaning in the message than at face value.

I didn’t even notice that! Good catch!!

Surely the folks behind The Batman knew that fans would fast crack the code when they decided to put a close-up of the Riddler’s card in the trailer, and I hope they’ll continue to drop more mysterious bits from the film. This is my favorite kind of “Easter egg,” giving the audience another layer to work with and getting us hyped via direct participation. Shades of early seasons of Lost when we were still jazzed about it.

The Batman stars Robert Pattinson as Bruce Wayne/Batman, Jeffrey Wright as James Gordon, Zoë Kravitz as Selina Kyle/Catwoman, Colin Farrell as Oswald Cobblepot/The Penguin, Paul Dano as Edward Nashton/The Riddler, Andy Serkis as Alfred Pennyworth, John Turturro as Carmine Falcone, and Peter Sarsgaard as District Attorney Gil Colson. In one last encoded wink at the audience, here’s what we were told about the movie’s release date—since these days, such specifics are anyone’s guess.

Check out the trailer again to start your week off right with some Nirvana and enigma: