Brainwashing on Legends of Tomorrow | The Mary Sue

Legends of Tomorrow is on a roll at the moment. After an enjoyable but uneven first season, Legends has come into its own as a time travel/superhero show that balances solid character work with gloriously silly storylines (“George Lucas has the spear of destiny,” anyone?) It’s skyrocketed to the top of my TV show list and is now easily my favorite Arrowverse property.

A few weeks ago, Legends of Tomorrow stepped up its game yet again by reintroducing Rip Hunter to the show as the reprogrammed lackey of the Legion of Doom in a twist that has quickly developed into one of the Arrowverse’s best brainwashing plots (and we all know how much the Arrowverse loves mind controlling its characters).

Brainwashing is one of those unfairly maligned staples of science fiction and fantasy that’s so often overlooked (and underused) as a catalyst for character development. Ideally, any story, be it the plot of a single episode or a seasonal arc, moves its characters forward by changing them or revealing something new about them. Brainwashing should be an ideal opportunity for this, not because artificially altering someone’s mind qualifies as growth, but because there’s so much to explore in the contrast between a character and their brainwashed counterpart.

Part of what makes Rip Hunter such a good brainwashing subject (from a storytelling standpoint, at least … Eobard Thawne had his own reasons) is that he was an interesting character to begin with. As Arthur Darvill has said himself, Rip may have had good intentions but he wasn’t a great captain.

He was selfish and selfless by turns, risking the timeline and his teammates’ loved ones to save his own family (and then feeling guilty about it) and alternately lying and baring his soul to his crew. In episode 1×14, “River of Time,” he sends Jax on a suicide mission that he could have undergone himself and then (partly to make up for it) jumps in front of Kendra to take a laser blast for her. There is a lot to unpack about a character that’s so difficult to pin down morally.

Now, the ways in which brainwashing can be used to deconstruct or develop a character are as numerous as sci-fi brainwashing methods themselves.

To draw from other Arrowverse examples, in the Supergirl episode “Falling” and The Flash episode, “Flash vs. Arrow” Kara and Barry are both exposed to forces (Red Kryptonite for Kara and pathokinesis for Barry) that lower their inhibitions and heighten negative emotions. What makes those episodes so interesting is that, as much fun as it is to watch two of the Arrowvese’s cinnamon rolls break bad for an hour, their actions reflect aspects of their true selves. Barry’s anger towards Eddie and Kara’s taunts at Alex bear grains of truth. So, when the effects of the Red Kryptonite and pathokinesis are reversed, our heroes still have to deal with the consequences of what they’ve said and done and we, the audience, have gained insight into our protagonists’ uglier sides.

Now, Rip’s situation is quite different. The Legion hasn’t reduced his inhibitions or brought repressed emotions to the forefront of his mind, but rather, reprogrammed him entirely, leaving only his memories and intelligence intact. Still, it’s a tactic of brainwashing that, like Red Kryptonite & pathokinesis, highlights oft overlooked aspects of Rip’s character.

It’s not until we’re confronted with a version of Rip Hunter that is bereft of his sense of honor, his compassion and his love for his “dear Legends” that we can appreciate just how fundamental these virtues were to who he was.

For example, Rip and Sara’s friendship was one of the most interesting relationships in season 1, but also one of the most tempestuous. They butted heads frequently, I lost track of the number of times she punched him or held a knife to his throat, he shot her with a stun gun and grossly mishandled breaking the news of Laurel’s death to her. Caity Lotz even said last May that she didn’t think Rip cared about anyone but his dead wife and son (though Darvill disagreed with her).

The events of “Turncoat,” however, put Rip’s interpersonal failures into perspective.

For all of Rip’s shortcomings as a captain and a friend, hearing Legion!Rip nonchalantly declare that Sara doesn’t “matter to [him]” is chilling because it so fundamentally contradicts who Rip was. Sure, he made mistakes but he always tried to come through for others. For some viewers, it took Legion!Rip to bring out this aspect of him. 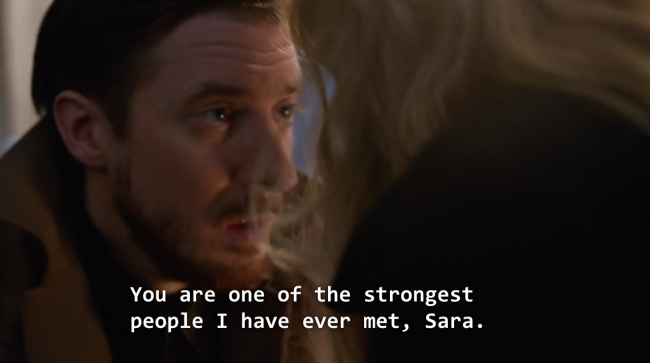 But going back to character development, there’s something inherently compelling—albeit disturbing—about seeing the team’s leader so far gone. Brainwashing inevitably paints the victim in a vulnerable light, as someone whose force of will is not indomitable, and I find that such fallibility is rarely explored in male leads.

To the show’s credit, Legends of Tomorrow has always been comfortable letting Captain Hunter fall refreshingly short of masculine ideals (his only shirtless scene to date served to emphasize how small and thin he was in comparison to the goliath he was fighting, for example). 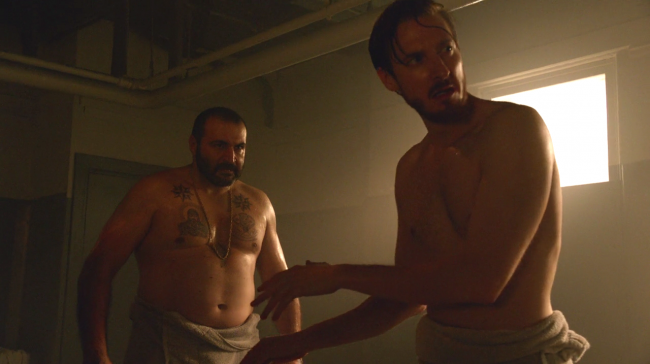 Nonetheless, it’s jarring to see the surefooted Captain Rip Hunter reduced to a subservient henchman. I might not have appreciated this aspect of Legion!Rip’s arc if it didn’t contrast so starkly with a similar plot in Arrow.

In season 3, Oliver Queen agrees to join the League of Assassins in exchange for his sister’s life. He undergoes the induction process and, for two episodes, it seems that Oliver really has lost himself to the League.

Then, in the aptly titled episode, “My Name is Oliver Queen,” Oliver betrays Ra’s al Ghul and reveals that—surprise—he’d been feigning brainwashing the whole time! What an indomitable force of will he has! How did he withstand indoctrination? No idea. Through the sheer man-power of his manly manliness, I suppose. Instead of getting a storyline in which our protagonist has to overcome the shortcomings of his own mind (which might, you know, have been interesting … maybe even a little challenging), Oliver emerges from the League unchanged and all we learn about him through the ordeal is that he’s even more amazing than we’d thought.

Rip, by contrast, is well and truly compromised. There’s no twinkle in his eye or knowing smile to suggest that this might all be a ruse. He’s committed some truly heinous crimes as the Legion’s puppet and, consequently, it’s going to be a challenge for him to come back from it.

Going by the synopsis for episode 2×14, “Moonshot” and Caity Lotz’s comments regarding Rip’s future, it seems that the division between Rip and the Legends isn’t going to mend the instant Rip’s brain gets unscrambled. There are several directions the show could take to resolve Legion!Rip’s storyline and, because Legends of Tomorrow put in the effort to develop and deconstruct its characters through this plot, I’m excited to watch it unfold.