The Art of DC Comics Bombshells Proves That “Sexy” and “Powerful” Aren’t Mutually Exclusive, and Neither Need Be “Exploitative”

Bombshells get it right where others get it wrong. 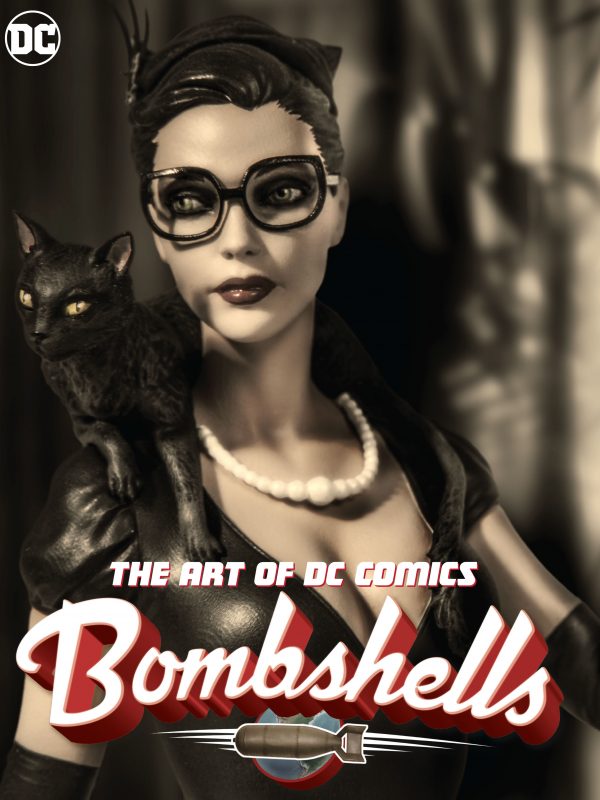 A month later than we expected, but well worth the wait, The Art of DC Comics Bombshells is finally hitting stores at the end of this month! Flipping through it, I was struck by the notion that through this line of statuettes, artwork, and comics, we have an entire collection of scantily-clad, pin-up heroines…that don’t bother me. That I actually find empowering. So, what’s the difference between these heroines and Spider-Woman as depicted by, oh I don’t know, Milo Manara?

The Art of DC Comics Bombshells is a gorgeous book to flip through, as Ant Lucia’s art and design (much of which you can see in the image gallery below!) is beautiful and wonderfully adapted both in print and on statuettes. However, what makes this book special is the insight into the creative process as provided by Lucia, as well as by Marguerite Bennett, who currently writes the DC Comics Bombshells comics title.

There are some who would argue that if one loves work like this, one must also love work like this and this and this. But context matters. Those who argue about artists’ freedom of expression (which no one here doubts they have, or would ever argue against) should remember that a part of what an artist does is say something with their work. In order to be “expression,” you have to be expressing something. So what are these artists saying with their work? Again, context matters.

While DC Bombshells are clearly designed to be sexy, they are also based on 1940s pin-up art, which in itself has a dual relationship with sexuality and sensuality. On the one hand, yes sexy. On the other hand, as Bennett writes in her essay on “The World of DC Comics Bombshells,” “Pinup art from the era arose as a counteraction to the horror of war, an escape, an ideal — the image of power and victory, love and beauty and the delight of return, tied up with a teasing red bow of lipstick sensuality.”

She then goes on to explain that Lucia’s work, from the start, was less based in the sexual representation of these characters, and more about giving them power. Bennett writes, “Ant’s designs somehow folded all those charms into something magnificent and powerful — made queens instead of kittens, made soldiers as well as seductresses, made forces of nature before femme fatales.”

The entire ethos and purpose of DC Comics Bombshells, what seems to have been built into them from the ground up, is power and agency. When looking at any of the Bombshells in print or as statuettes, one can of course look at them and think them sexy…but from the way they’re posed, to what they’re wearing, to what they’re doing in the image, “sexiness” is never the entire point. These Bombshells don’t solely exist as decorative objects. In fact, the level of detail on each statuette, expressing each Bombshell’s personality in a nuanced way without words, speaks to how much these characters are seen as people, not playthings.

When looking at the stories in the comics, these women exist in a world where they don’t have to deal with things like sexism, racism, and homophobia, and that’s very much on purpose. When I had the pleasure of interviewing Bennett at NYCC last year, she said:

So, to reference not only the historical ways in which folks contributed who don’t fit the definition of the white, male cis-hetero, but to also have some fun with it as far as putting these constraints on them. It drives me crazy when I’d watch period pieces, and half the characters that I love—can I cuss on this?

[Ed note: I assured her she could cuss all over this mamma-jamma.]

….get shit on to prove that they were allowed to be heroes. Whereas no, I don’t want to watch Batwoman and Maggie in fear all the time. I just want them to have a healthy, loving relationship. So I did away with that. I don’t want it. I wanted it to have the feel of the era, but I didn’t want them to have to prove that they were human beings before we begin. We have enough just dealing with ‘Oh, we have Nazis.’ [laughs] So, any place that I didn’t have to deal with that straight out, I just didn’t.

Sexiness and power are not mutually exclusive. However, they are not always one and the same either. Like I said, context matters, and DC Comics Bombshells gets the balance right in a way that other interpretations of female heroes don’t. If you’d like to enjoy the beauty of these powerful ladies (or want to get a holiday gift for someone who would), you can pick up a copy of The Art of DC Comics Bombshells at your local comic shop on November 23rd, and everywhere books are sold November 29th.