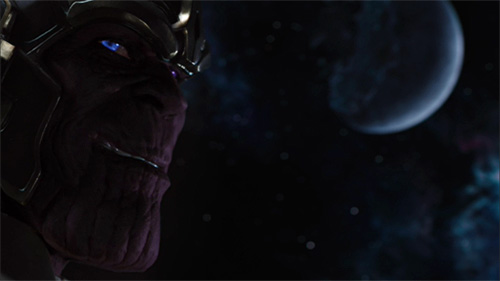 The big bad evil guy who’s been casting his shadow all over the Marvel Cinematic Universe made an appearance at the Disney-centric D23 Expo in Anaheim. A statue of Thanos, whose machinations set off nearly every major event in the MCU just about since its inception, was on display in the Anaheim Convention Center, and he’s certainly making his presence known in a pretty big way.

The photo above, snapped by @StitchKingdom, appears to be our best peek at Thanos as he’ll appear in Infinity War. Thus far, the hulking menace (played by Josh Brolin) has been more or less stationary in his post-credits stingers, oftentimes with the shot mostly focused on his face. Here, though, it’s clear that he’s going to be one substantial baddie both in attitude and in size. I mean, look at the guy. His forearm is bigger than my thigh. I feel bruises coming on just from looking at him too long. And that long, black cloth behind him is more likely just some drapes covering things that are bound to be revealed soon, but I’m totally imagining it’s a cape and if I’m right about that, look at how long it freaking is. Somewhere, Edna Mode is screaming in frustration.

Anyway. This has gotten me pretty stoked for Avengers: Infinity War all over again. The ensemble piece has a lot riding on it—such as the merry sendoff of the MCU’s Phase Three and the welcoming of Phase Four. It’s good to know that the load rests on some really sturdy (and hella swole) shoulders.

The first installment in the two-film Avengers: Infinity War series is due out on May 4th, 2018, with its as yet-untitled sequel coming out a year later on May 3rd, 2019.