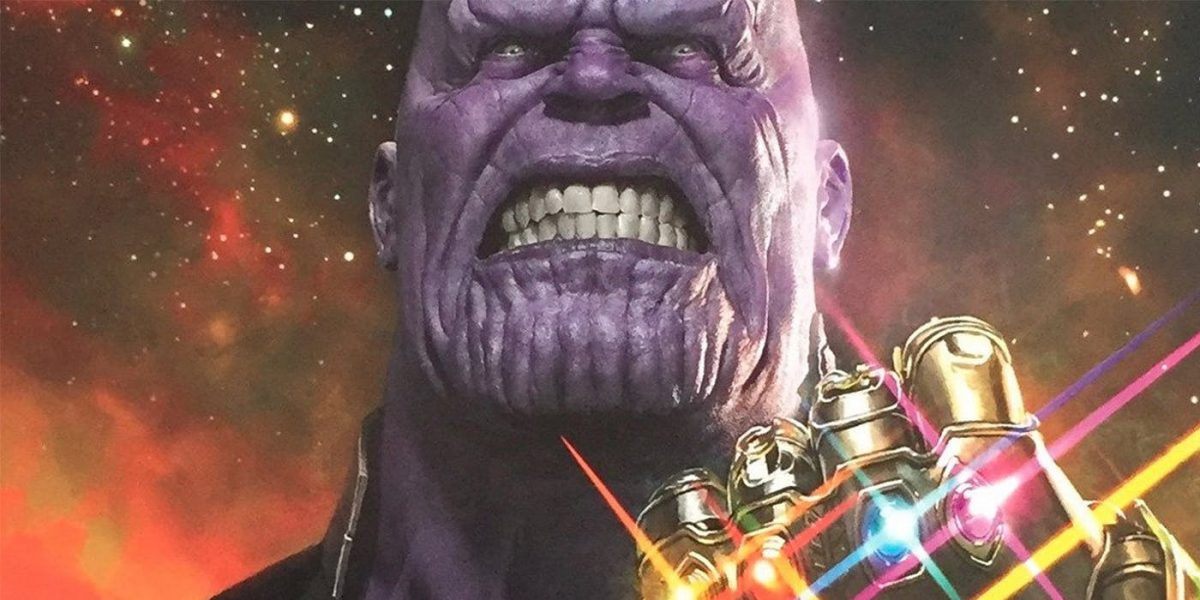 Directing brothers Joe and Anthony Russo sat for an interview in which they discussed the Mad Titan’s background and what’s driving his quest for those shiny rocks. But is the audience really going to connect with a villain’s desire to exterminate half the population of the universe?

The Russos’ extensive interview with Telegraph India makes for interesting reading, as they go into more depth discussing the film than their oft-evasive “wait and see!”-type answers. They continue beating the hype drum for the Mad Titan, with Joe Russo saying:

Heroes are only as good as their villain, and we spent a lot of time and energy on this one making sure that Thanos was the most intense villain that we can make him and the best villain that the Marvel Cinematic Universe has seen.

So we hear! The Russos have made it clear in many prior statements that Infinity War is pretty much “a Thanos movie,” and that the purple menace has the most screentime (yay?) in a film that features approximately 37,000 Marvel superheroes. The Russos told Telegraph India that they’re telling this movie from Thanos’ perspective, which might be the most intriguing thing about the Thanos-centric approach. The question remains whether we will care for that perspective at all.

The more that the Russos talk up Thanos, the more skeptical I become. Grabbing the mantle of “best villain that the Marvel Cinematic Universe has seen” in the course of a single movie is a complex balancing act, and Marvel’s reputation for forgettable villains is testament to the difficulty the studio has had in this regard.

I believe Michael B. Jordan succeeded at seizing the “Best Villain” crown from Loki in Black Panther—but it’s hard to imagine violet CGI’d Josh Brolin eliciting the kind of sympathy that Erik Killmonger’s tragic, traumatic childhood generated, or that Brolin could challenge the live wire of Jordan’s charisma.

A good villain, I believe, needs to be able to inspire a degree of sympathy and understanding in the viewer. I was also a fan of Daniel Bruhl’s underused Zemo from the Russos’ Civil War, because he was not some cackling embodiment of evil: he was a grief-stricken man driven by the loss of his family. We might not agree with the methods that he used for revenge, but we can grasp why he did what he did. But Thanos?

Anthony Russo: Thanos’s primary motivation on a plot level is to go after the Infinity Stones. That’s really the connective tissue that pulls our entire MCU together as the stones are spread out throughout the franchises.

What is his agenda?

Joe Russo: Thanos is this virtually indestructible character who’s stronger than the Hulk, and has invincible skin. He’s from a planet called Titan. Many years prior to the film his planet was experiencing a cataclysmic shift. They were running out of resources, and they were overpopulated.

Thanos made a recommendation that they exterminate half the population randomly in order to save the rest of the population. Of course, the Titans rejected his notion, branded him a mad man, exiled him, and the planet ended up dying. So he has taken it upon himself to go planet-by-planet throughout the universe and wipe out half of the population of each planet as a way to correct the planet and bring it back into balance. [Ed note: emphasis mine]

Once he hears about the stones, he realises that if he can get hold of all of the Infinity Stones he can control the entire universe. With the snap of his fingers he could correct the universe permanently by removing 50 per cent of life from it. So, these are incredible stakes for our characters. If the Avengers were built for anything, it’s for stopping Thanos from completing his goal.

Joe Russo makes Thanos sound like a megalomaniac control freak here, the kind you go out of your way not to interact with at the office Christmas party. Thanos wanted to exterminate half of Titan to save it but people were like, hmm, maybe not, and since he might have been sorta right about Titan he now feels entitled to “correct the universe” by eliminating 50% of life with a snap of his fingers?

Yeah, that’s … not entirely as understandable a goal as avenging your dead wife or challenging your cousin’s claim to the throne after his father killed your father. “I know best and I’m going to do what I want, damn the consequences” is, to me, an unattractive motivation in the Trump era.

I get that the Russos have to make the Infinity War stakes big enough to get everyone involved and go beyond even the “oh no, the world is in peril yet again” scenario. Thanos is out to destroy, essentially, half of all worlds. Heroes gotta stop him. But this “corrective” desire as his ultimate motivation? It makes me wish that they were actually keeping Thanos’ original drive in the comics, which was to impress Death—who he was in love with. 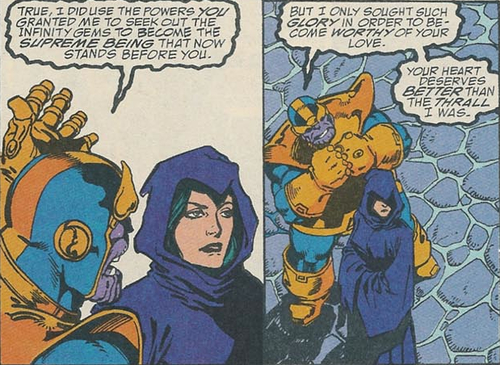 In the comics, Thanos collects the Infinity Stones so that he can become a godlike being and win the affections of Mistress Death, the physical embodiment of death in the Marvel Comics Universe. Many of his dastardly schemes revolve around courting Death or winning her back.

Thanos is determined to prove how much he loves Lady Death by eliminating life. This is also bonkers, but also an incredible narrative idea. And quite frankly, trying to desperately prove an unrequited love is a situation an audience can understand, even if you go about it by attempting to murder half the universe. 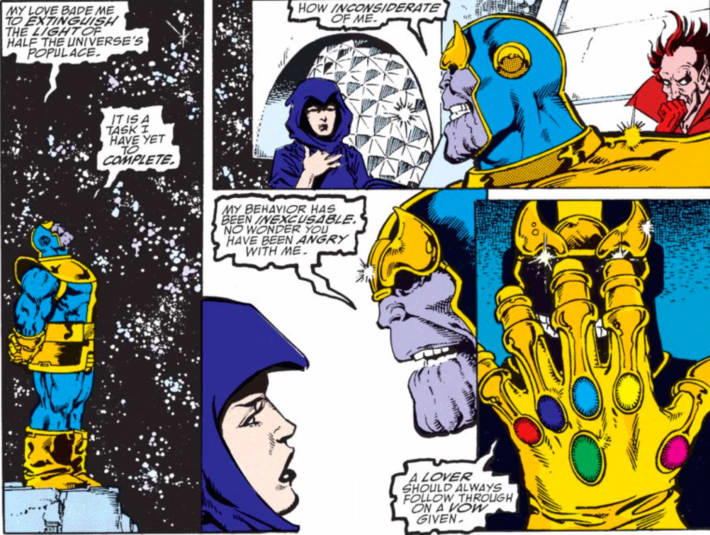 Yet there’s been no indications that the Russos are going the Lady Death route, and they’ve also announced their intention not to show Thanos’ backstory—I imagine that they mean young Thanos as an outcast because of his anomalous physical appearance, and his home planet failing. I know we’ll have to wait and see, but it seems to me that any element of sympathy or connection that we could feel for Thanos has been excised.

So while we might be left with a brutal and uncompromising villain, will he really prove to be the best in Marvel Cinematic history? Are we supposed to be drawn to him as a nihilistic strongman? Or is the ultimate goal just to make us hate him so much that no other prior villain can compare?

I already miss Thanos the lover as the reason for becoming Thanos the Gauntlet-wielding fighter.