Thanksgiving Dance Party: 9 Songs to Crank Up in the Dining Room 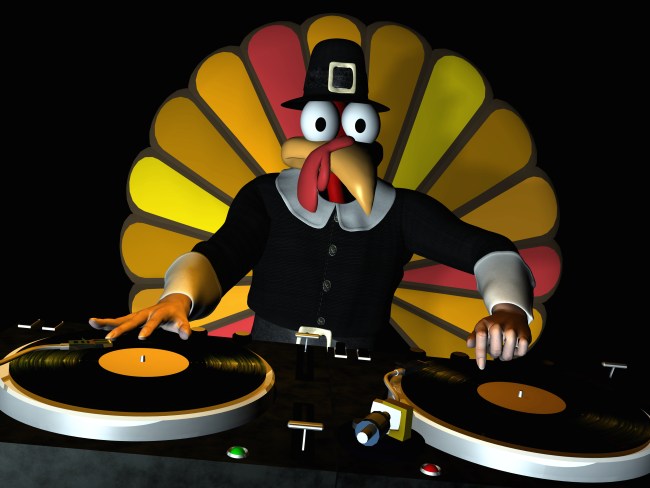 Happy Thanksgiving, folks. Here in the States, that means most of us have the day off and plan to spend it in the kitchen cooking up a delicious feast, and then enjoying the fruits of our labor with loved ones. But a long day in the kitchen necessitates a quality playlist—nothing too distracting, since you wouldn’t want to screw up your recipes, but it also couldn’t hurt to have some songs that properly celebrate the occasion. By which I mean, songs about food.

1.) Carey Mulligan’s haunting song “Let No Man Steal Your Thyme,” is, nominally, about how you shouldn’t let some careless dude take your cooking herbs. But it’s also obviously a pun on the word “time,” and how you shouldn’t waste your time on jerks who just want to use you. I think this is also a virginity metaphor, but I’m choosing to ignore that reductive aspect and instead I’ll just say: ladies, you can do better. Dump him this Thanksgiving, and prepare something delicious and Thyme-infused! Perhaps this Thyme corn bread?

2.) “Do You Love Me” by the Contours is not really a song about food. It’s a song about dancing. But as a kid, the main part of this song that I remembered was the lyric “I can mash potato”—which is an actual dance move, by the way, made famous by James Brown. I recommend that you learn how to do it this Thanksgiving, in your kitchen, in between fixing up those mashed potatoes. With this song in the background, of course, followed by James Brown’s “Mashed Potatoes USA.”

3.) “Froot” by Marina and the Diamonds is, um, not about fruit. I’m preeeeetty sure it’s about sex. But it’s also an incredibly fun and dance-tastic electro-pop song to put on in the background while you prepare a fruit pie, or several. It’s also a pretty sexy song, and there’s nothin’ wrong with that.

4.) Sleeper Agent’s “Proper Taste” is also about a more metaphorical definition of the word “taste,” meaning it’s a great song to jam to this Thanksgiving if you’ve decided to become estranged from some of your more tasteless friends this year. With lyrics like “Call me pumpkin / carve me out / light my candle / blow me down / what’s my name / spell it out / but not too loud,” this pop-punk jam is clearly designed with the autumn spirit in mind.

5.) Laura Mvula’s “Bread” is more about the theme of breadcrumbs than bread itself, but she chose the title “bread” in spite of that—and I’m guessing it’s because of the comforting imagery of home that it evokes. The song is also beautifully comforting to listen to.

6.) This song is from Kelis’ album Food, on which several songs have food-themed titles. This song has an overarching food metaphor about “making it to breakfast”—the meaning behind that is, the romance in the song is therefore officially serious. But it’s also a love song about gratefulness and giving thanks, so it works pretty well for Thanksgiving.

7.) Please, please, please be careful not to set any of your meals on fire this Thanksgiving. But if you do… put this song on.

8.) I mentally refer to this song as “Beans Greens Potatoes Tomatoes,” but that’s not going to help you understand what the heck this is. This little ditty is an oft-remixed excerpt of a song called “Hold My Mule,” sung by mega-talented gospel singer Shirley Caesar. That one line about food got excerpted from the song and turned into a meme/song titled “Grandma What Are You Cooking For Thanksgiving.” Oh, and here’s the whole original version of the song, if you want to watch that.

9.) This is “Peaches” by The Presidents of the United States of America, played on peaches.