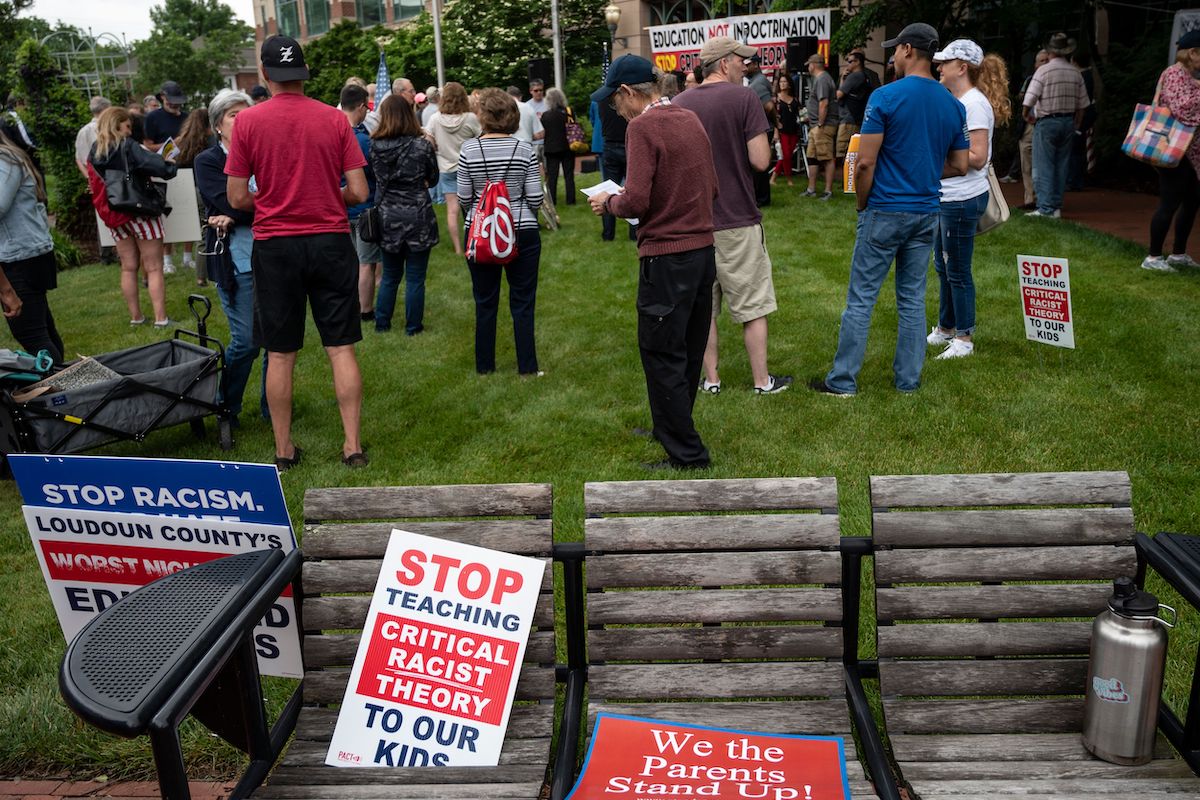 A high school principal in Texas has been suspended after being subjected to attacks from residents, accusing him of teaching “critical race theory” and disparaging his family.

James Whitfield is the first Black principal of Colleyville Heritage High School, a role he took on just recently ahead of the 2020/21 school year. At a school board meeting this past July, a man accused Whitfield of promoting critical race theory and “the conspiracy theory of systemic racism,” according to the Washington Post and local outlets. That man, who is a former school board candidate, repeatedly named Whitfield in his complaints, despite being ordered not to make personal attacks. His comments were reportedly met with applause and calls to “fire him.”

Whitfield responded in a lengthy Facebook post, writing, “At the last GCISD school board meeting, an individual was allowed to speak my name in a public open forum (against the rules) and I can no longer maintain my silence in the face of this hate, intolerance, racism, and bigotry.”

Whitfield says that while the overwhelming majority of parents and other residents he interacts with in-person and online are “loving, supportive, empathetic, compassionate, and rational people,” he does encounter racism as part of his job. And apparently, he’s been told to stay quiet about it.

“For the better part of the last year, I’ve been told repeatedly to just ‘get around the fact that there are some racist people’ and ‘just deal with it and stay positive’ each time the racist tropes reared their heads, but I will stay silent no longer,” his Facebook post reads. “I cannot ask people to speak up if I am unwilling to do so myself, and just because I am a school administrator that does not take away my rights and ability to be human and defend myself.”

“I am not the CRT (Critical Race Theory) Boogeyman,” Whitfield says. “I am the first African American to assume the role of Principal at my current school in its 25-year history, and I am keenly aware of how much fear this strikes in the hearts of a small minority who would much rather things go back to the way they used to be.”

Whitfield describes a “Breaking the Barriers” panel he participated in back in late Spring of 2019 that has been under attack recently. “My colleague curated the presentation and I happily joined them in sharing my experiences and story during this presentation,” he writes, but apparently sharing his story and presumably acknowledging that he faced barriers that needed breaking is some sort of proof that he’s been teaching kids about racism—which, of course, is a thing that exists and kids should learn about.

Whitfield shares other examples of times he has acknowledged the existence of racism, including an email he sent to his professional communities following the death of George Floyd condemning racism and sharing insights on how to commit to anti-racism. “Another issue they have with me is my support for the Southern Poverty Law Center and their commitment to fighting structural racism and advocating for justice for all,” his post reads. “Please read that again (eek). If someone is against that I just must ask, ‘what are you for?’”

But in the end, Whitfield knows that this isn’t really about “critical race theory” for these people now attacking him—or, at least, that that’s just “one piece of how race plays into their hateful agenda.” It’s also incredibly personal.

In the post, Whitfield recounts an experience from June of 2019, on the night he was offered his current job as principal.

“Those who have received administrative appointments know how it usually goes,” he writes, “the board approves and you get a congratulatory call from someone in central admin (usually your supervisor). That was not the case this evening. The call I received was a sign of things to come.”

Whitfield says based on the caller ID, he knew this was a call about the job. But instead of making an offer (or a rejection), the administrator told him to check his email and said they’d call him back.

“As I read the forwarded email it said ‘Is this the Dr. Whitfield we want as an example for our students?’ And the picture attached was a picture of my wife and I kissing on the beach in Mexico during a trip we took for our 5-year anniversary,” Whitfield writes.

Whitfield’s wife is white. According to the local NBC affiliate, “Whitfield’s wife Kerrie said she took the photo to mean a black man with a tattoo on his arm was inappropriate. But James Whitfield said he took it to mean the issue was he was in an interracial relationship.”

This is the photo that has parents (pretending to be) so concerned:

Here’s the photo of a Texas school principal and his wife celebrating their anniversary that the school district asked him to remove from social media following a parent’s complaint “to avoid further controversy.” https://t.co/SCFDhFYmh2 pic.twitter.com/M2jQjXzsnW

This is what the white folks in Colleyville are really flipping out about https://t.co/dLSTkwUW3S pic.twitter.com/Uf5vIzGM6v

In his Facebook post, Whitfield says that the administrator asked him to take the photo down because “we just don’t want people to stir up stuff.” Whitfield was aghast but he did remove the picture from his profile.

“As I got off the phone my wife sat there in tears,” he writes. “I tried to do my best to console her as we both tried to grapple with what just took place. We hid the photo, no one from “above” ever mentioned anything else about it, but the damage was inflicted on us in profound ways. It was at this moment that I knew the attack that we currently endure, was coming. There are numerous examples of these sorts of racist threats and statements directed my way, but I continued to take the high road and focus on my mission and purpose, as nothing was ever done to alleviate or deter these threats on my behalf.”

Following that July meeting where Whitfield was accused of the apparently unforgivable crime of acknowledging racism exists (AKA “critical race theory”), he was placed on paid administrative leave. That seems to be why he’s posting about these issues now, tracing his career back to things like being asked to remove a personal photo so as not to “stir things up,” being told to ignore racism and take it all in stride—these are all concessions he made and yet he still ended up here, suspended over white people’s baseless, racist attacks.

According to NBCDFW, “A petition in support of Whitfield has hundreds of signatures, and he said he’s humbled for the support he’s received and regrets he held this in for so long.

The Washington Post writes, “In late August, more than two dozen students gathered outside Colleyville Heritage High School holding signs that said ‘I stand with Dr. Whitfield’ and ‘Hate has no home in [our school district],’ the Fort Worth Star-Telegram reported. A dozen parents also gathered in a show of support for Whitfield, the newspaper reported.”