Everything is Bigger in Texas, Even The Amount of Books “Under Review” by Texas Lawmakers

"A poop by any other name would still smell just as gross." -Romeo and Juliet, maybe? 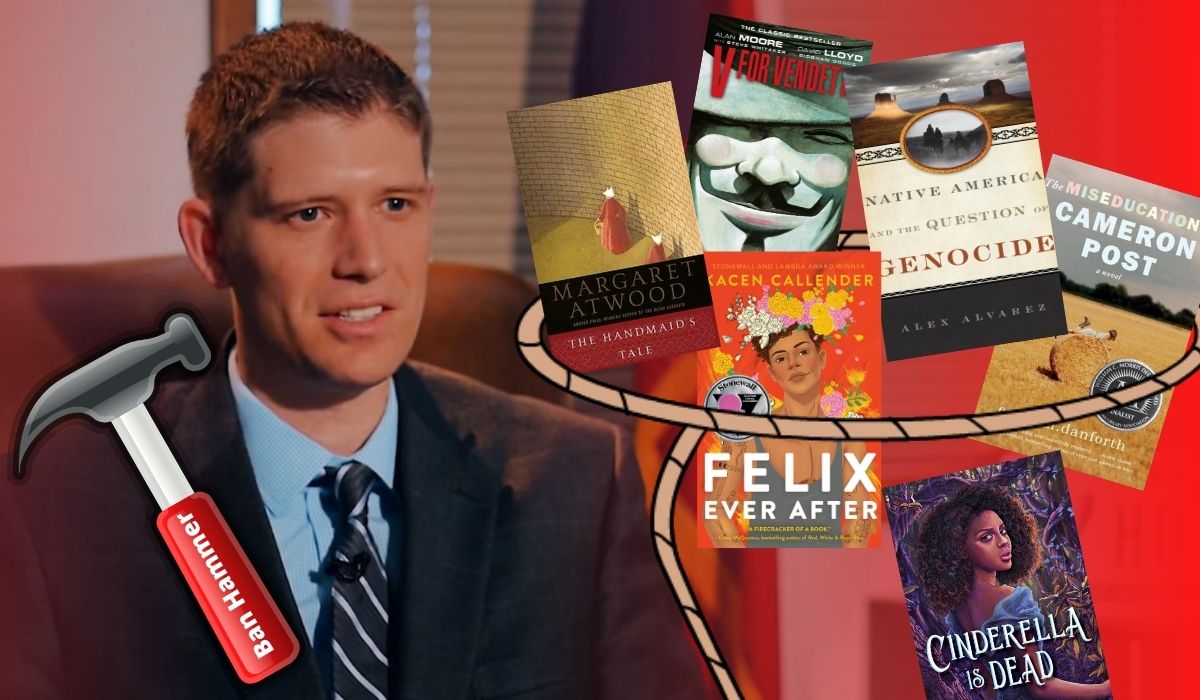 The latest “culture war” spearheaded by conservatives has been over the books in classrooms and libraries of public schools. This is not only a natural progression of fanaticism after spending the summer banning “critical race theory” (not the real academic framework, but now a euphemism for anything conservatives don’t like), but like CRT stirs up one of the most-watched groups of voters: suburban moms.

Why do voters matter? Because the person leading an “investigation” attacking books that pertain to race, sexuality (teen pregnancy, abortion, and anything LGBTQ+), or anything that might “make students feel discomfort” in Texas is running for a major state position.

Enter: Republican State Representative Matt Krause, a leader within the Tea Party-based “Freedom Caucus” (a misnomer, it appears). He’s using his role as a chair on the Texas House Committee on General Investigations to require the Texas Education Agency (TEA) to report which schools have any of the 850 books he’s deemed objectionable (a 16-page document). Additionally, Krause is asking for how many copies of each title each location has, and how much was spent on each book (school/library pricing is very different).

Meanwhile, Krause is also running against incumbent Republican Ken Paxton for State Attorney General, a man suing the few districts enforcing mask-wearing and who has been under investigation for abuse of power for most of his tenure, but keeps winning—because Texas.

But whatever information is gathered from Krause’s book investigation will result in a continued backlash of inclusive fiction and non-fiction titles for students and curriculum. When asked about why these books, why these questions, etc., Krause used the shield of “[I] can’t comment on an open investigation,” an excuse to avoid accountability.

Despite a lot of this feeling, in scale, very large and new, it isn’t. This recent wave of books “under review” to explicitly “banned” is a continuation of the decades of Red Scare and redbaiting. This fear of a changing world and demographics even bled over into film (the Hayes code and now MPAA), comics (Comics Code Authority), and music.

In decades (1920s–’50s) preceding the Civil Rights movement (’60s) and even during it, redbaiting and the Red Scare was used to halt progress. This was used at the federal and state level, with Senator McCarthy and his copycats, as well as at the local level with KKK chapters and “We’re not racist. We just think it is better if people don’t mix” crowds in places like Levittown (oh looky there: the first planned suburb).

Instead of framing these “paid organizers” as a threat to oneself, the excuses are always about protecting the church, children, and something that sounds similar to the 14 words still popular today among white nationalists (like Tucker Carlson.)

This may seem like peanuts compared to the greater issues at hand, but it’s worth noting the “think of the children” approach is why so many private schools popped up after Brown vs. The Board of Education case. It’s where we got white flight into the suburbs, redlining, the “school choice” movement, and more. When that wasn’t enough, what little literature published by authors of color or white allies calling out the BS is the next target.

Do teachers, aids, librarians, etc. have all the answers and never mess up? Hell, no. Just the other week, a math teacher did a beyond offensive thing loosely resembling a Native American dance. See what I mean? That is just math, and many people of color and queer folks will have frustrating stories of sitting in a reading or English class (even in college) guided by an inept teacher, and more—especially for those that were the only person of a particular gender, race, ethnicity, etc in the discussion.

All of that being said, these professionals, alongside advocacy groups, psychologists, and more are trying to do better and find a way to broach difficult topics in the classroom in the best way. This isn’t just “for fun.” It is exactly because these books are challenging and work best in a group discussion.

We like to think this is best for just hard-to-understand classics in old English, but this approach works for so many modern works, as well. It helps us learn how to analyze information and understand different perspectives and world views. Often, this upsets parents who see this as direct opposition to what they get at home, creating a fear of information, leading to book bans.

Though some districts are complying with requests from TEA, others are pushing back. For example, according to the Texas Tribune, Scott Thomas, Austin ISD spokesperson, said that they will not respond because essentially anyone can look up those books on a school’s website. The Texas Library Association (TLA) and the American Library Association (hosts of Banned Book Week) made statements on the ridiculousness of these reviews/bans.

The American Library Association supports @TXLA and all Texas library workers as they fight to prevent the erasure of the lives of BIPOC and LGBTQIA+ persons from the library collections of Texas schools, libraries, and universities. https://t.co/JkteXx7A1H

“Professional librarians receive extensive education and ongoing training to qualify them to develop collections which meet the broad and varied interests and needs of their communities. Collection decisions are not made based on personal likes, dislikes, or beliefs.”

Elections aside, here are other consequences

For a group of people that act like rejecting safe spaces is a core personality trait and “facts over feelings,” conservatives are really concerned about their children learning about what most of white America did (and continues do/not do) in terms of racial justice, gender equity, and more.

We saw it with Princess Weekes’ recent story about the woman made famous for pushing for a ban on Toni Morrison, and now, here, there’s a blanket concern over “[making] students feel discomfort.” They are talking about white students, and we know this because a bunch of racist texts, history chapters, and more have existed forever, but people of color pointing out those errors are called “cancel culture.”

Again, the people that complain about having to “walk on eggshells” rather than think critically and learn from mistakes are making the lives of teachers that much more difficult. It was not but a few weeks ago that a school administrator told teachers the best way to teach both sides of a “controversial issue” (as required by Texas law) was to assign a text that says the opposite. His example? The Holocaust. While the admin was very clearly wrong, the fault should lie with the politicians and not the local school boards scrambling to not lose their teaching licenses over a new law made in reaction to the Black Lives Matter movement.

Like many stories where the majority LGBTQ+ and books by authors of color are banned, it sends a message that their existence and stories are controversial. It is showing (as if we needed reminding) people of color, immigrants, and LGBTQ+ people that our stories are not valued.