Texas Democrats Have Fled the State To Protect Voting Rights

Texas Democrats Have Fled the State To Protect Voting Rights, Governor Vows To Arrest Them Upon Return 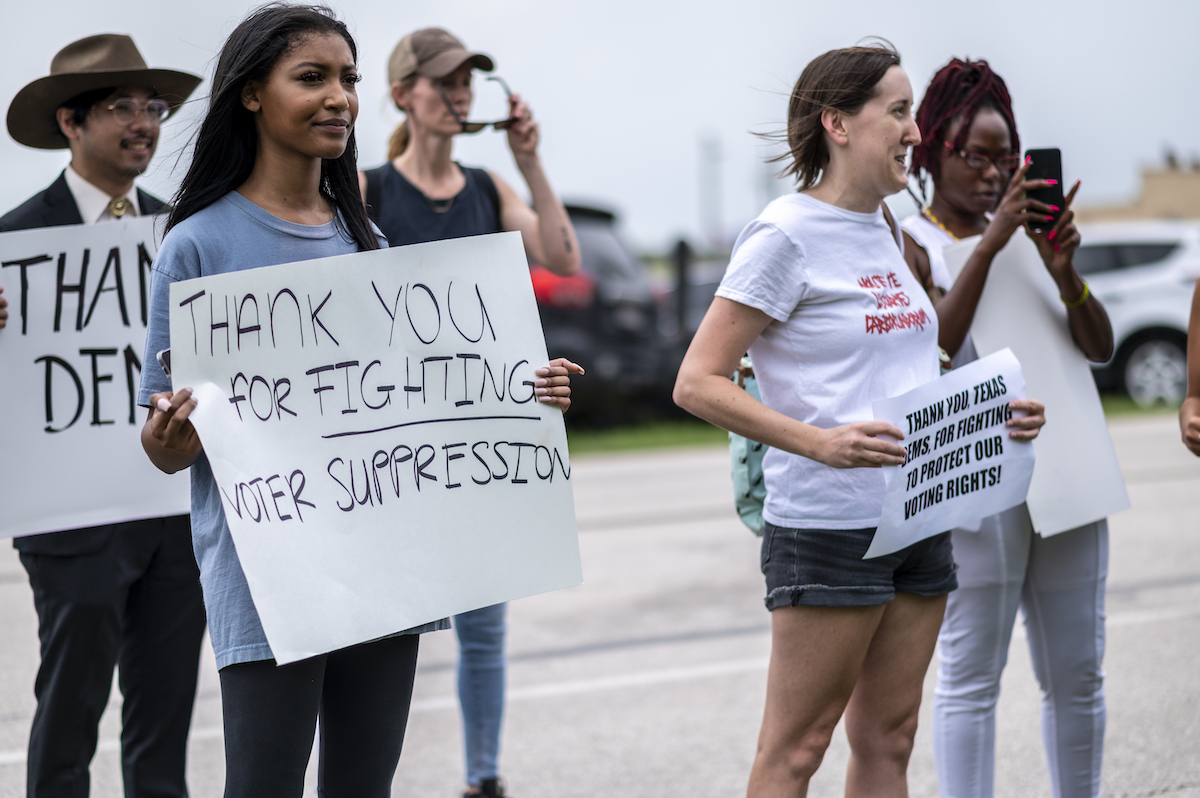 More than 50 Texas state Democrats are currently hiding out in Washington D.C. in an attempt to stop their Republican counterparts from passing a restrictive voting bill.

By walking out, the Democrats denied Republicans the quorum they need to hold a vote on the bill. Hopefully, it will also give Democrats some bargaining power in negotiations when they return. However, that might not happen for quite some time. If Democrats are planning to run out the clock until the current special session ends, they’ll have to stay in D.C. (or elsewhere out of state) for weeks, until August 6.

They have good reason to remain in D.C., too—and not just to delay the vote. The Texas House has authorized arrest warrants for the Democrats, at which point they are supposed to be brought back to the Capitol and can only leave by written permission of the House Speaker.

Texas Governor Greg Abbott has also demanded that the Democrats be arrested as soon as they’re back in the state and “cabined inside the Texas capitol until they get their job done.”

But those warrants are only authorized for arrests made within the state’s borders. So for now, the Democrats are staying away.

We’ve seen this tactic before. It’s been nearly two decades since Democrats in Texas left the state to stop a vote but pretty recently, just back in 2019, Republicans in Oregon hid in Utah and Idaho in order to stop a vote on a climate bill. At the time, far-right militia groups across the Pacific Northwest vowed to protect the Republicans “at any cost.” At least one Republican senator publicly encouraged those militias to come to his aid and to “come heavily armed.”

The pro-conspiracy theory, anti-government militia group the Oath Keepers wrote on their public Facebook page that “this is how you get a civil war.”

The group has since been banned from Facebook but I’m just a wee bit doubtful that given the chance, they’d be offering the same support to these Democrats.

The bill the Democrats are trying to stop from passing would be devastating for Texas voters and would affect POC and lower-wage shift workers the hardest. (Surprise, surprise.) The New York Times writes:

Among other provisions, the latest Republican proposal would ban 24-hour voting and drive-through voting; add new voter identification requirements for voting by mail; increase the criminal penalties for election workers who run afoul of regulations; and greatly expand the authority and autonomy of partisan poll watchers.

“The bills also create a slew of new criminal penalties and requirements for folks who assist voters at the polls, or people who assist others planning to vote by mail,” writes NPR.

“For example, they require that people fill out paperwork if they are taking someone who is not a relative to vote in person. And they require people to exit a car if there is someone voting curbside in that vehicle.”

There’s truly no reason for this except trying to keep people from being able to vote.