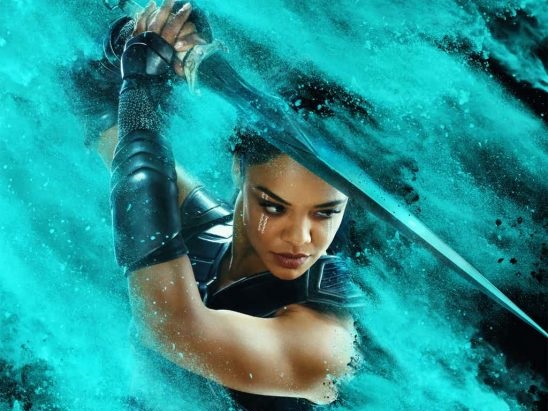 “One of the reasons I was so excited to be in this film,” Tessa Thompson told Collider in a recent interview, “is I remember seeing the first Thor film and being like, ‘Oh my God, it’s a Shakespeare family drama.’ … I thought there was something so fantastic about the mix of genres.”

Thompson covers a lot in this wide-ranging interview, including the development of her character, racist reactions to her casting, and her stunts and castmates. But no matter what she was discussing, she made me plenty excited to see her take on this character!

Asked about the influences of both Norse mythology and the Marvel comics on her character, Thompson said that they’re drawing from a mix of sources to create something new. “The exciting thing for us was to create a Valkyrie that is a combination of all those things,” she said. “The cool thing about working with Taika [Waititi] is he has a healthy respect for the comics but also a total irreverence in the sense that he’s like, ‘Let’s create something new.’…And because it was Valkyrie’s introduction, we really had a lot of space to create ‘our’ Valkyrie.”

However, there was one thing Thompson definitely wanted to take from the comics and previous Thor movies: a fancy Asgardian accent. “You watch the Thor movies, there’s this Asgardian thing that I could not get out of my head,” she said. “Then you read the source material and anytime Valkyrie speaks it’s in those cool italics — so I’m like, ‘She has an accent!'” And though both Taika Waititi and Anthony Hopkins told her not to worry about an accent, Thompson persisted. “But I’m a nerd and I go back to the source material and I’m like, ‘I have to speak in italics.’ I don’t know how else to approach the part. So we [settled] on something that felt like it honors Asgard.”

Asked about the racist controversy over her casting, Thompson said that while some backlash was clearly “just racist,” she hoped that other worries came from a place of “being very invested in these stories.” She also pushed back against the “authenticity” argument. “People were posting about the race swap and the implications of that,” she said, “and they were very upset that this doesn’t honor Norse mythology…. if you read Norse mythology, it doesn’t really make sense. And, you know, Idris Elba needs company. He can’t be the only black person in the neighborhood.”

Thompson also spoke about her experiences with the stunts and green screens. For instance, remember this majestic shot of her riding a horse from the trailer?

Here’s how Thompson described it:

“That [shooting] day I was on a big blue sausage…Not epic at all. Then in comes this incredible horse rider who is on this beautiful stallion and the horse jumps in the air and it’s fantastic and epic. Maybe 15 minutes later they did a composite where suddenly I’m on that horse and I couldn’t believe it… It’s like, ‘Look at me go.'”

She also trained with the same swordperson who worked with Gal Gadot on Wonder Woman. “I started to just casually get used to having a sword and it turns out the biggest thing of getting used to having a sword is not losing it. I lose it all the time. I have to ask people — ‘Have you seen my sword?’ You’ve all been there, right?”

Lastly, Thompson spoke about how happy she was to see Cate Blanchett – whom she greeted by saying “I loved you in everything” – taking on a female villain in Hela. “I think when we talk about representation, especially about Valkyrie representing a strong female character,” she said, “as much as we want righteous, fantastic, strong characters, we also want weak ones and bad ones and shitty ones. We want all kinds. Representation means the spectrum.”

(Via Collider; image via Marvel Entertainment and Walt Disney Studios)