Traditional Auto Dealers Complain That Tesla Stores Are Illegal, Clearly Have Our Best Interests in Mind 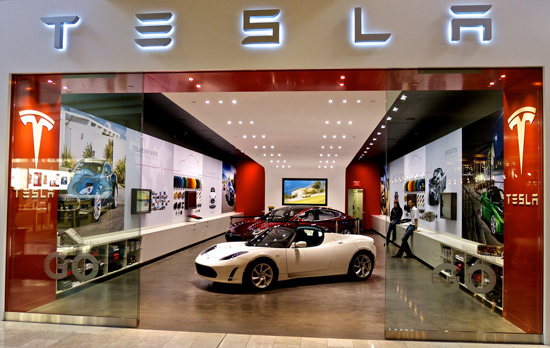 Tesla Motors is making quite a splash in the automobile industry. The announcement of their ambitious solar-powered Supercharger network for their Model S electric cars was a pretty big deal, and that’s only one of their initiatives. It looks like the way Tesla is getting the word out there has upset some traditional auto dealer associations. See, it’s basically illegal for an automaker to directly sell their cars to customers. That’s what Tesla’s opponents are saying they’re doing with their high-end mall stores.

Unlike typical dealerships, Tesla operates stores out of shopping malls that are designed to educate potential customers about the Model S. If they just so happen to then want to purchase one, store associates will direct them to a nearby computer terminal where they can purchase one. Officially, they’re not trying to sell anything. Instead, they are merely providing the ability to use a computer to shoppers in case they decide to take the plunge themselves.

The whole concept certainly centers on the splitting of legal hairs, but that’s often the difference between legal and illegal actions. Despite this fact, Automotive News reports that at least four states are suspicious of this model and have expressed concerns about it. Tesla is attempting to comply with all laws that affect their individual stores. Depending on where they’re situated, different state or local laws might be in effect.

An entrenched industry that has a vested interest in the status quo obviously wouldn’t lobby to have Tesla indicted for perceived infractions despite their stores not actually being illegal. That would just be petty. Automobile dealerships obviously only have our best interests in mind, folks.