Terrence Howard is a Living Example of Toxic Masculinity 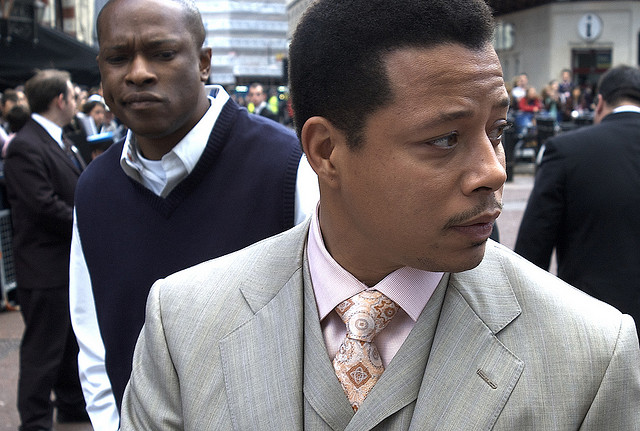 Terrence Howard is a great actor. This we know. However, we also know that he has a history of treating women like garbage (and doesn’t seem particularly ashamed of it). Apparently, he was also single-handedly responsible for the Iron Man film as we know it, and thinks he can just…invent math.

In a recent interview with Rolling Stone, Howard said many unthinkable, baffling things that seem out of touch with this or any reality. I’ll stick with the gender stuff, but do yourself a favor and go read the entire interview to see the lengths this journalist goes to give Howard the benefit of the doubt, and how that doesn’t help at all. [Trigger Warning for domestic violence.]

On the time he was arrested for hitting his first wife (whom he married and divorced twice):

She was talking to me real strong, and I lost my mind and slapped her in front of the kids. Her lawyer said it was a closed fist, but even slapping her was wrong.

Because the response to “strong talk” should always be violence. Obvi. At least he seems to feel bad about this one?

On the time he hit his second wife, Michelle Ghent, during a trip to Costa Rica, and she returned with a black eye:

She was trying to Mace me, and you can’t see anything so all you can do is try to bat somebody away, and I think that something caught her. But I wasn’t trying to hit her.

Uh-huh. Except why was she trying to mace you in the first place? You usually use a mace in self-defense to fend off an attack. That’s what it’s for. Also, “batting someone away” hard enough to give them a black eye?

But his violent responses to things aren’t limited to women. He’s been escorted off a plane for violent outbursts, and had an incident in 2005 where he was checking on a wait time for a table in a restaurant, a woman accused him of trying to cut her in line, things escalated, and Howard ended up hitting both the guy she was with and the woman.

This behavior isn’t surprising when you consider the person responsible for teaching him how to be an adult male. When Howard was two years old, his father, Tyrone (who was 21 at the time), and his mother, Anita (who was 17), took Howard and his two siblings to go see Santa Claus at a Cleveland, OH department store. Again, there was an issue where a family that was there accused the Howards of cutting them in line. Only this time, Tyrone got hold of a nail file and stabbed the other dad until he fell, then fled the scene. Tyrone Howard spent 11 months in prison for the incident.

And that same man gave Howard two pieces of advice that he seems to hold onto to this day, and seem to steer his personality. Howard explains that his father taught him to trust and love no one but himself by telling him when he was a kid:

Howard’s dad also laid this piece of advice on him:

My daddy taught me, ‘Never take the vertebrae out of your back or the bass out of your throat. I ain’t raisin’ sheep. I raised men. Stay a man.’ But being a man comes with a curse because it’s not a society made for men to flourish anymore. Everything is androgynous, you know? The more successful men now are the effeminate.

His most current wife, Mira Pak, to whom he was still married at the time of the Rolling Stone interview, has peaced out and the couple divorced shortly after the interview, despite the fact that, in front of this RS reporter, they looked very much together. However, telling statements from Pak indicate many of of the abusive, misogynist issues above:

[W]e have an amazing connection. But, I mean, he’s not perfect. Doesn’t do the dishes. Doesn’t cook. Doesn’t lift a finger. I probably leave him 30 times a month. [She laughs and continues] He’s so selfish. But, you know, he didn’t have much of a childhood. It was difficult for him being picked on and bullied all the time. We don’t have a normal life. In our two years together, I’ve only gone to restaurants with him two or three times. We’ve never been to the supermarket together. We’ve never been to the movies. I’ve never gotten a gift from him. Never, never.

And then every minute that he has free, it’s to do this. [Note: “this” refers to these shape thingamajigs he makes out of plastic that hold the answers to the Universe and also “prove” that 1 times 1 equals two. Read the full RS interview for the math and logic-flouting details] I help him, cutting, drawing and putting things together. I’ve developed a slight form of agoraphobia lately. I never go out. I have no friends here. I feel like Rapunzel, you know, stuck in a penthouse with my baby.

Even though there’s no violence in this case (that we’re aware of), their relationship seems abusive nonetheless, with Howard getting away with murder, and Pak left with the baby, no friends, and made to help with Howard’s strange project.

Judging by the rest of the interview, it seems as though Howard may also be suffering from some sort of mental illness, which he doesn’t seem to want to do anything about given his mocking tone about seeing a therapist once in the 1990s, so there’s almost certainly more at play here. However, in Terrence Howard we see a living example of the damage ingrained misogyny can do; of how damaging the way we teach masculinity is and the real effect it has on men. For Terrence Howard, “being a man” is violence, aggression, and stubbornness. With strangers, and even with the people he supposedly loves most. That is, if they stick around.

Howard currently has three wives behind him (and four marriages, if you count his second marriage/divorce from his first wife). Perhaps one day, rather than blaming the world, or rationalizing his behavior, or being so caught up in his own “genius” that he’s blind to everything else, he’ll realize that he’s the common denominator in those broken relationships, and that “real men” accept help when they need it, and take responsibility for themselves and their actions.

(via Yahoo! TV; Image via lewisham dreamer on Flickr)