We Went There: A Feminist Interpretation of Terminator: Dark Fate 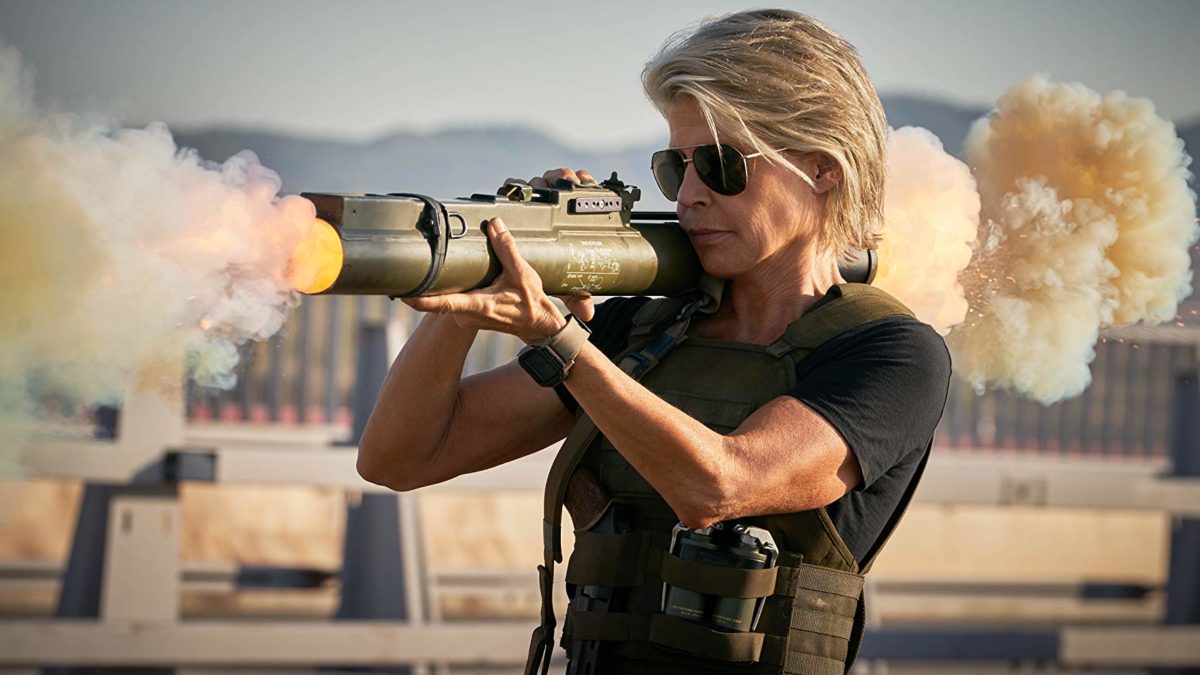 Okay. First things first. I need to be upfront and say that Terminator: Dark Fate is not a very good movie. In fact, it’s actually pretty bad. (After viewing it, my friend pointed out that with each new, failed attempt to reboot this franchise – Dark Fate was supposed to be the start of a new trilogy – that Terminator now has, in fact, a trilogy of failed reboots!)

The story feels lazy and repetitive, the action sequences (and fight scenes in particular), are a pretty incoherent and poorly choreographed. The de-aging CGI in the opening sequence is so bad that it looks like a cut scene from a mediocre video game. (Not to mention the CGI in the first fight scene between the Rev-9 and Grace is so sloppily done that you wonder if they saved all the budget for the end of the film.) On top of that, the new “terrifying” Rev-9 terminator – it’s basically just the T-1 terminator and the T-2 terminator combined. With no other tricks up its sleeve.

BUT! It is fun (in the way that bad action films are fun), and it provides us with a really important thing to examine – namely an action film centered around three badass women of varying ages kicking all kinds of butt. So what I am here to present you with is not so much a review, but rather a feminist reading of Terminator: Dark Fate. 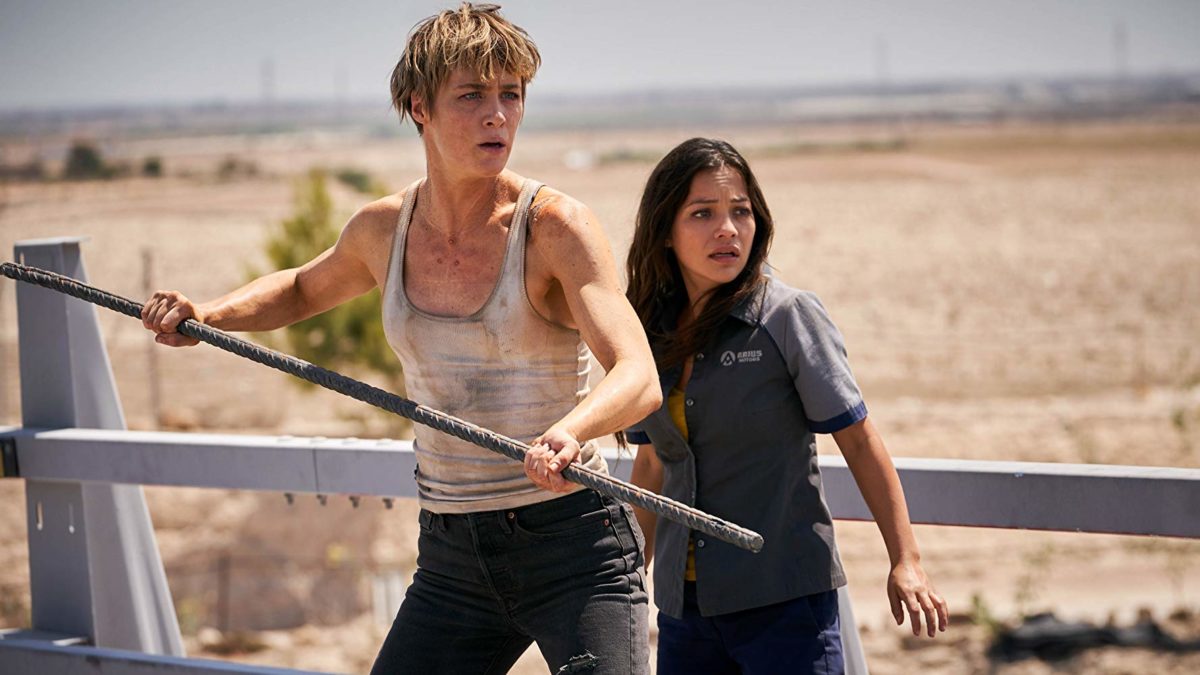 First: the main characters. The story follows the arrival of Grace (Mackenzie Davis), an “augmented” (aka robotically enhanced) resistance fighter from the future, to our time. She is tasked with finding and protecting Dani (Natalie Reyes), a young mechanic living in Mexico City. While fleeing the Rev-9, they meet the iconic Sarah Connor (Linda Hamilton), who helps them escape. The three women are diverse in age, ethnicity, and appearance. I really can’t tell you how exciting it was for me to see a young Latina woman, a tall (shout out to my fellow tall women!), androgynous woman, and a woman in her sixties (with little to no plastic surgery) fighting together and kicking robot ass.

That sort of representation is still hard to find, but especially in the action genre. Now, I must point out that two of the three leads are white, so it’s not as ethnically diverse as it could be, but I think the way their whiteness and privilege come into play later in the film – and the way that they use it – is important to acknowledge. Grace uses her whiteness (and the uniform of a Border Patrol agent) to free Dani from a detention center. Sarah uses her military connections (her closeness to systems of power) to acquire a weapon capable of stopping the Rev-9.

The film opens with a flashback. Sarah Connor is on the beach with her son John, celebrating the stopping of “Judgement Day” and the prevention of Skynet, when a T-1 era terminator storms the beach and in spite of everything, murders her son in front of her. Permanently scarred, Sarah then spends the next decades of her life tracking down and destroying all terminators that she finds. Dani, a hard working young woman trying to provide financial security for her family, is the target of the Rev-9 (sent by the new Skynet known as “Legion”). She is innocent and unaware of why the male presenting machine (he is played by Gabriel Luna) is relentlessly pursuing her and trying to end her life. Grace, the super soldier of the future, was sent to find Dani and protect her from the Rev-9, sacrificing her own life if necessary. 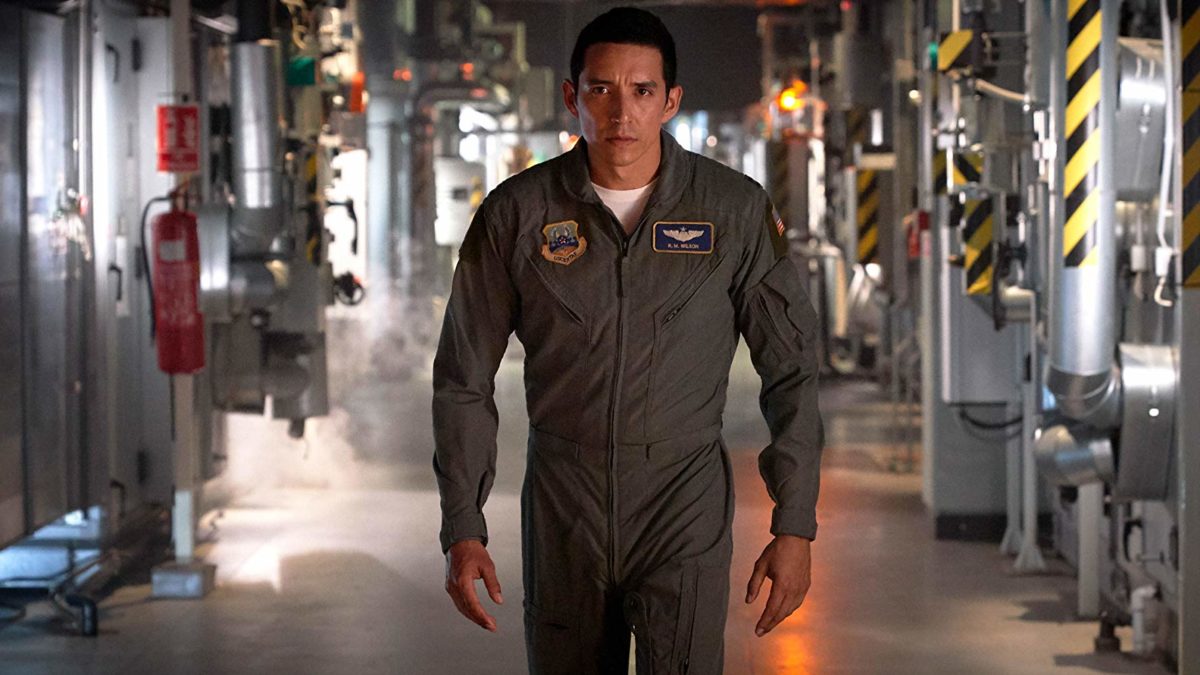 The women are continuously on the run from the Rev-9, who manages to locate them eventually every time they seek respite. They are also, initially, extremely mistrustful of one another. Each refusing to fully explain themselves, even if it would be helpful to their situation. Grace doesn’t trust Sarah’s backstory, after all in her future Skynet never existed, but she also refuses to explain just WHY the Rev-9 is after Dani. Sarah is too traumatized by her grief and PTSD (and her alcoholism) to fully empathize with Grace’s equally valid trauma. She is also bitter about being reduced by the system to just a “womb” in need of protecting. She wasn’t inherently worthy of protecting, only the reproductive organ that would produce the REAL leader – her son. Poor Dani doesn’t trust either of them and yet is stuck – dependent on these white women to use their power and knowledge to uplift and protect her until she takes a stand and makes her voice heard.

And it isn’t until they meet Carl (Arnold Schwarzenegger) the terminator turned “ally” (see where this is going) that they can truly move forward with making a plan that will stop the Rev-9 once and for all. For you see, the Rev-9 can actually be viewed as the Patriarchy (specifically as we know it now in its present shroud of late stage imperialist capitalism). It is the unstoppable, ever adapting dominant hegemony. It wants not only to destroy Dani (in this reading she is the symbol of intersectional third-wave feminism), but to destroy any chance that what she represents (hope, growth, humanity) will come to pass in order to protect itself. It masks itself in varying forms: the male stranger, the border patrol officer, the cop, even her own father. Because the patriarchy is present in every threat and every figure of male authority. 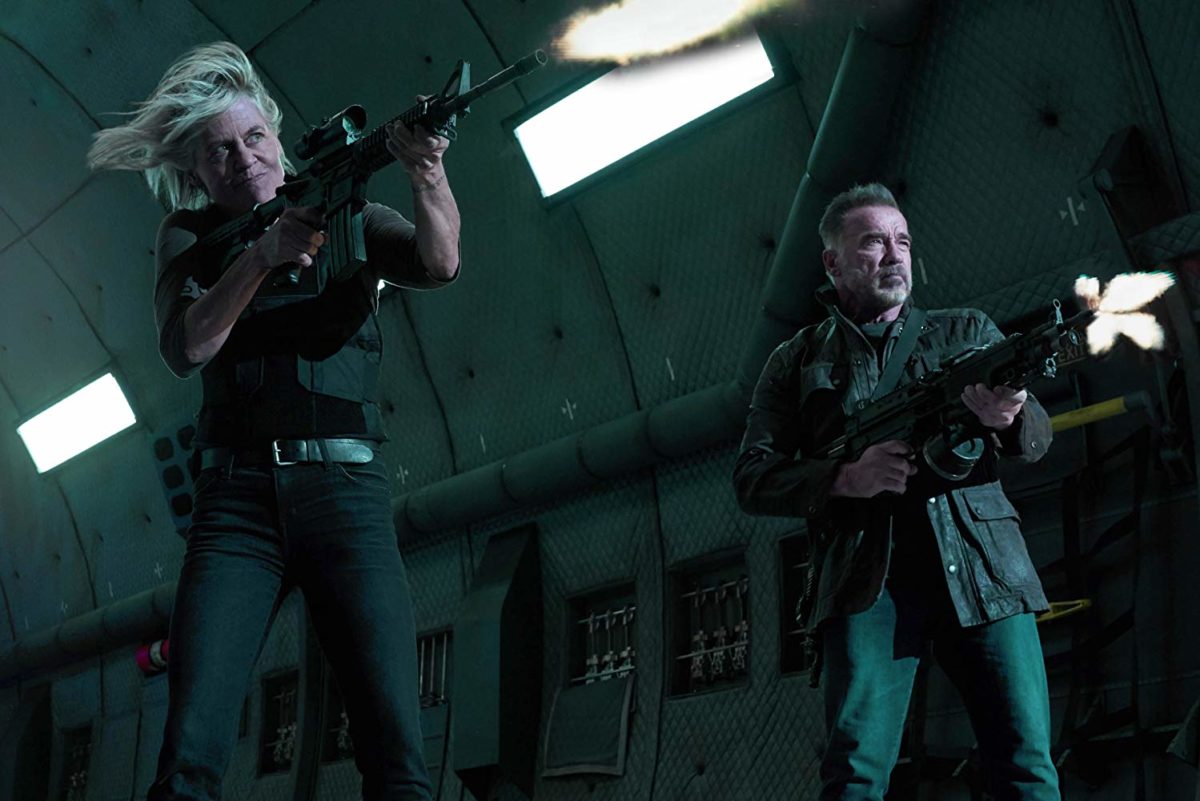 Ok back to Carl. Carl, much like self-proclaimed feminist men, has come (through harsh self examination and listening to the women in his life), to realize the damage he has caused and is attempting to help undo it. Even when Sarah, overwhelmed when she meets him (he is the murderer of her son), tries to fight him, he passively accepts her anger and retaliation. He also presents an interesting dilemma that women must contend with on a daily basis. In Terminator 2, Sarah spends most of the film allied with a terminator (also played by Schwarzenegger) only, as we learn in the beginning of this film, to have a man (er… machine) wearing the SAME FACE murder her child. In the way that women talk about “Schroedinger’s rapist,” Carl represents the fear and anxiety women experience every time they interact with a man. Will he be good? Will he be violent? Will the “good man” suddenly turn violent? It is impossible to know until he does. Carl is Schroedinger’s Terminator. He must continually prove to them that he is safe and will help them survive.

At the film’s climax, (located inside the Hoover Dam) Grace finally confesses the truth to Dani. Unlike Sarah, it isn’t Dani’s womb the Rev-9 has been sent to destroy, but Dani herself. Dani is the future leader of the resistance (#resistance lol). She is the woman that turns what is left of the human race from scattered survivors hurting each other for scraps into an army capable of fighting back against the machines. She turns them into enough of a threat that the machines go back in time in order to stop her from ever finding her power. 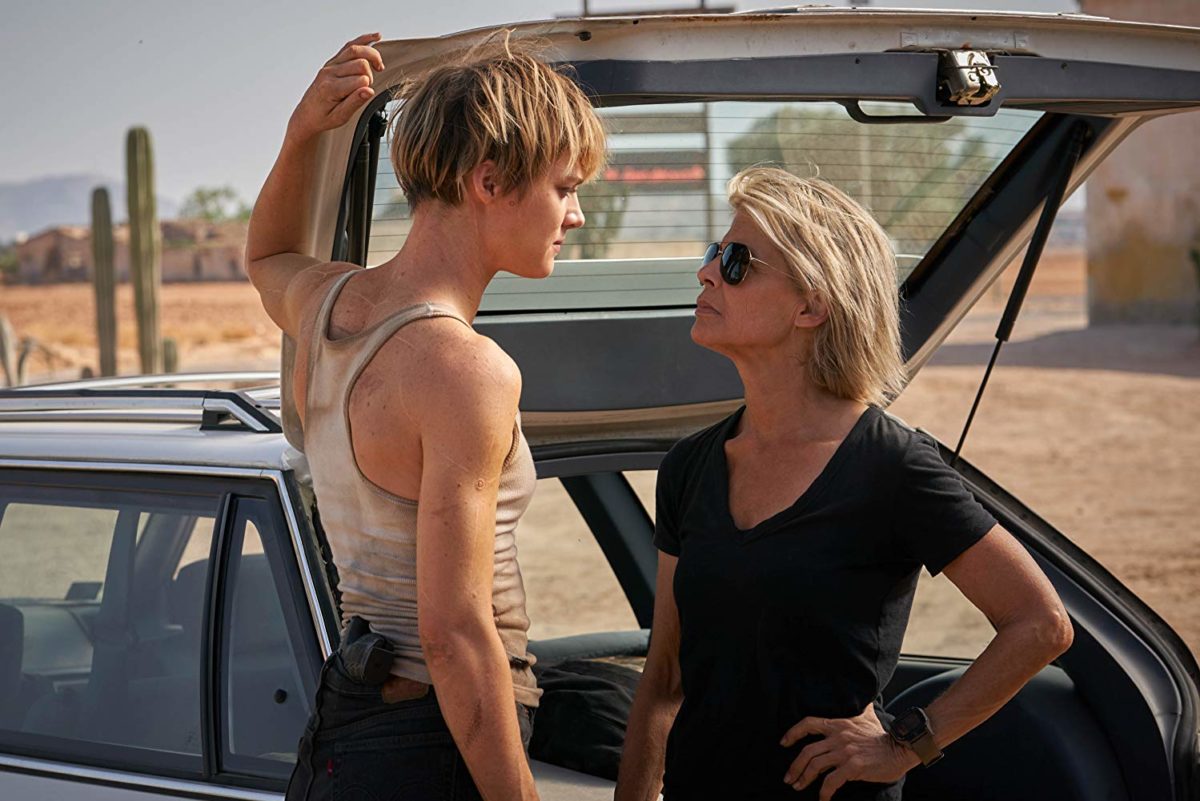 Ultimately, both Carl and Grace sacrifice themselves in order to save Dani. This leaves Sarah to train Dani so that she is ready to fight the machines when the new judgement day occurs. It’s interesting to think about the ways in which Sarah, the old guard of second-wave feminism, works with Dani at the end. She has to accept that not only is she not the sole victim of the patriarchy, but that the ways that the patriarchy (and all systems of oppression) adapt and change over time. That the only way to help Dani, and the future of humanity, is by providing her with the tools and knowledge that she has acquired, but also by letting her take charge and lead the way.

At least, that was my deeper reading of this extremely imperfect popcorn flick. Trying to find moments of hope and joy before we face our own Dark Fate. I would love to hear more critical interpretations of the way this film handles these themes and messages (it, I can not stress this enough, is not perfect) as well! It’s Sunday, let’s get into it.